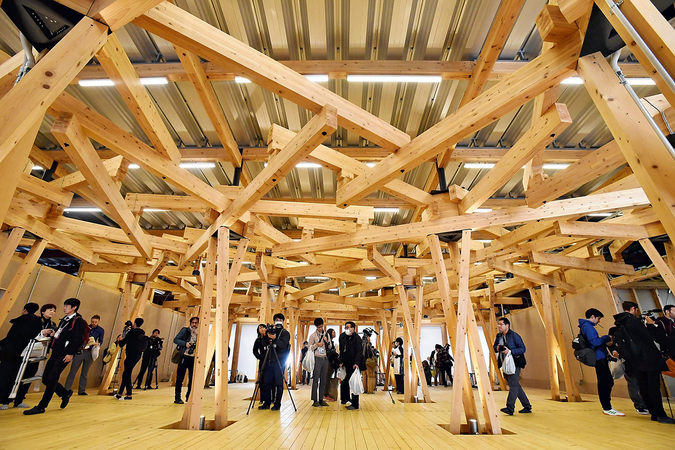 The interior of the Village Plaza, part of the 2020 Olympics Athletes' Village in Tokyo, is shown to members of the press on Jan. 28, 2020. MUST CREDIT: Japan News-Yomiuri

The Village Plaza, a facility under construction in the Athletes' Village in Tokyo, for interaction among athletes at the 2020 Tokyo Olympic and Paralympic Games, opened to members of the press on Wednesday.

According to the Games organizing committee, about 40,000 cedar and cypress trees offered by 63 local governments will be used for the single-story wooden structure featuring a floor space of about 5,300 square meters.

A number of the structure's pillars bearing marks of origin along with the ceiling and portions of the interior were among areas shown to media members.

The facility will be taken down after the Games and local governments will use the wood for the construction of public facilities and other purposes.

A welcoming ceremony for athletes is to be held at the Village Plaza, which will also serve as a media hub for interviews and other activities. A store with assorted goods, a flower shop and a cafe will also be set up there for athletes and shoppers.

The Athletes' Village covers an area of about 44 hectares, and the construction of a 21-building housing complex, primarily for athletes, was completed at the end of last year. Construction is currently under way on a facility featuring a fitness center and a clinic as well as a main dining room for athletes.