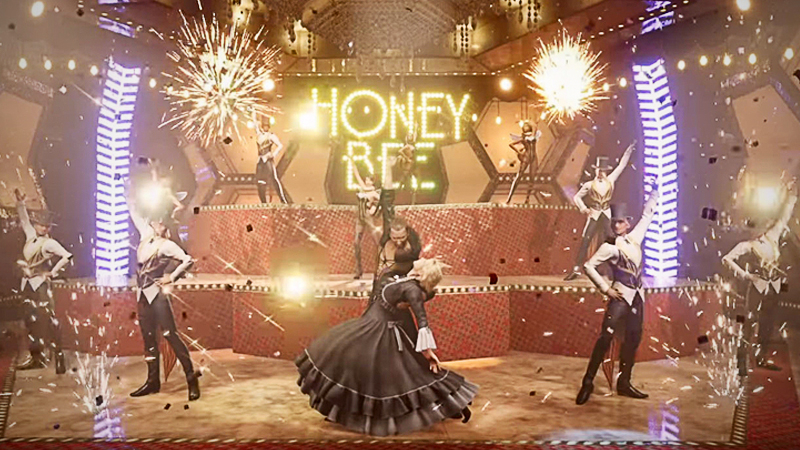 The Honey Bee Inn scene, one of the most famous from Final Fantasy 7, is remade like a musical number. MUST CREDIT: Square Enix handout image. ONE TIME USE ONLY. MANDATORY CREDIT. NO SALES. NO TRADES.

Remaking Final Fantasy 7 was always a tricky bet. Fans want it. But everyone, including developer Square Enix, is anxious about whether going back to one of the most important video games of all time is just going to soil people's memories.

If the latest trailer released Friday morning is any indication, remaking the milestone 23 years later almost feels like a necessary step to preserving the game's unforgettable story for future generations. And by freeing it from the confines of being a single game, game director Tetsuya Nomura (who designed the original characters in the 90s) has gained the leeway to give its story the dignity it always deserved.

The 4-minute clip answers a lot of what fans have been wondering. Will Cosmo Canyon's noble wolf-lion-thing Red XIII look terrible? No, he looks amazing.

Are we going to see more of the ultrachic and deadly Turks of the Shinra Corporation? Yes, and they've all got a makeover, particularly executives Heidegger and Reeve Tuesti.

And most importantly, how much are they going to show of that famous scene of protagonist Cloud cross-dressing to gain access to a brothel full of women dressed as bees? More than ever, as it seems they expanded that scene to have its own musical number, with the glitz and flash of a Broadway musical.

"True beauty is an expression of heart, a thing without shame to which notions of gender don't apply," the Honey Bee Inn stylist coos in one of the new lines from the game's script. Cloud then emerges from his makeover in a dress with hair extensions, looking more detailed and pretty than ever before. Even his confrontation with lecherous brothel owner Corneo unfolds differently than it did in the 1997 release.

The first part of Final Fantasy 7 Remake is being released for the PlayStation 4 on April 10. Square Enix has not yet cemented how many parts the game will be split into, which has caused some critics and fans to worry. After all, Square Enix is famous for stormy, extremely long-term projects that are somehow still rushed to release. Final Fantasy 15, a recent notorious example, was under development for 10 years after many management changes, until it finally released in 2016 in an admittedly unfinished state.

But by not locking itself into promises of a trilogy or numbered episodes, Square Enix could avoid the pitfall that swallowed the recent Star Wars trilogy. Disney itself acknowledged that deviating from the Hollywood standard of three films would best serve the Star Wars brand.

By not promising how many episodes this game will be, the remake of Final Fantasy 7 could be anywhere from two to ... however many games long. (My guess is four.) And Final Fantasy 7 is a story with several sections, several natural endpoints, and several scenes that, like Cloud, would benefit from a few touchups and extensions.

After all, Final Fantasy 7′s stars are eco-terrorists coming up from the bottom side of a sharp class divide, resisting in a world where the lines between business and government is all but gone, trying to save a planet from inevitable climate disaster. The first city, Midgar, features its have-not citizens living literally beneath the haves. And its main character Cloud is a testament to the frailty and fallibility of human memory, and how we can construct entire identities from dashed hopes, childhood trauma and self-deception.

Final Fantasy 7 is notable for bringing the Japanese role-playing game format to the global mainstream. The Dragon Quest and Final Fantasy series were always huge in Japan, but the medium didn't find its "it" factor until the first PlayStation and the extra storage that came from its CD-ROM format. By mixing full-motion video with gameplay, Final Fantasy 7 was a landmark in interactive storytelling, and its success cemented the PlayStation's place in the games industry.

This remake has a lot to live up to, and yet, each trailer released seems to promise something even more special than our own fallible memories might conjure.