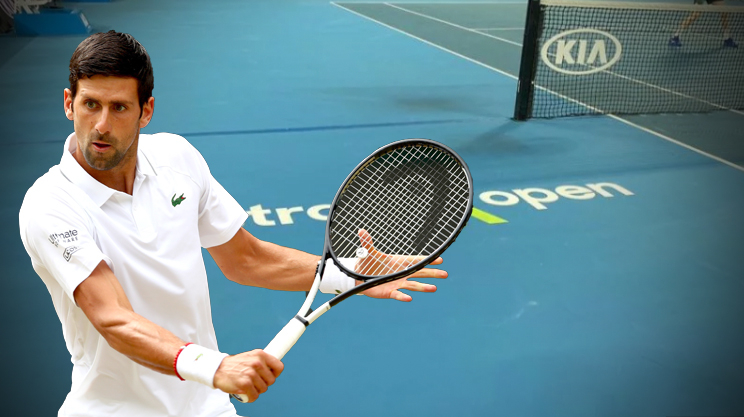 With all the history Novak Djokovic has made on the bright blue hard courts at the Australian Open and all the Grand Slam titles he's already won, the Serbian champion somehow managed a new achievement Sunday at Rod Laver Arena in Melbourne.

In seven tries, Djokovic had never before triumphed in a major final after trailing two sets to one. But after the talented young Austrian Dominic Thiem took the second and third sets Sunday, Djokovic held steady to win the fourth and fifth and capture a record-extending eighth Australian Open title, 6-4, 4-6, 2-6, 6-3, 6-4.

The victory is Djokovic's 17th major title of his career, placing him just two trophies behind Rafael Nadal and three behind Roger Federer, the record holder whom Djokovic dismissed in straight sets to get to the final.

On Monday, Djokovic will reclaim the world No. 1 ranking. But he didn't get there without a fight.

Djokovic didn't so much as surge to a comeback win as he stayed strong, raising his level just incrementally enough as the match wore on, proving not just his first-class resilience and willpower but also his experience in five set finals.

Thiem, the No. 5 player in the world at 26 years old, challenged Djokovic as few have in Melbourne - Djokovic hadn't lost a set in the Australian Open final since Andy Murray took one off him in 2015. Thiem pushed Djokovic just as he pushed Nadal months ago in the French Open final, just as 23-year-old Daniil Medvedev pushed Nadal again in a thrilling five-set final at the U.S. Open in September.

But Nadal proved it twice last year and Djokovic proved it again as the first Grand Slam of the decade came to a close: Tennis's old guard may be fighting harder than ever to maintain their status, but they will not slacken their grip on the sport willingly. The younger generation will have to pry their fingers loose.

The Austrian didn't waste opportunities to break Djokovic's serve and looked utterly in control for a period as Djokovic first grew irate with the crowd then frustrated after being called for time violations in the second set. In the third set, the Serbian looked exhausted, left the court to see the medical trainer and guzzled fluids from then on.

Thiem's fatal error was that he simply maintained his high level of play in the final two sets. Against Djokovic, who carried a 3-1 record in five set major finals into Sunday's match, failing to improve as the match wore on was as good as giving the win away.

Djokovic finally sealed the match after Thiem sent a forehand wide, and he simply smiled and pointed to the crowd, saving his victory roar for a few moments later.