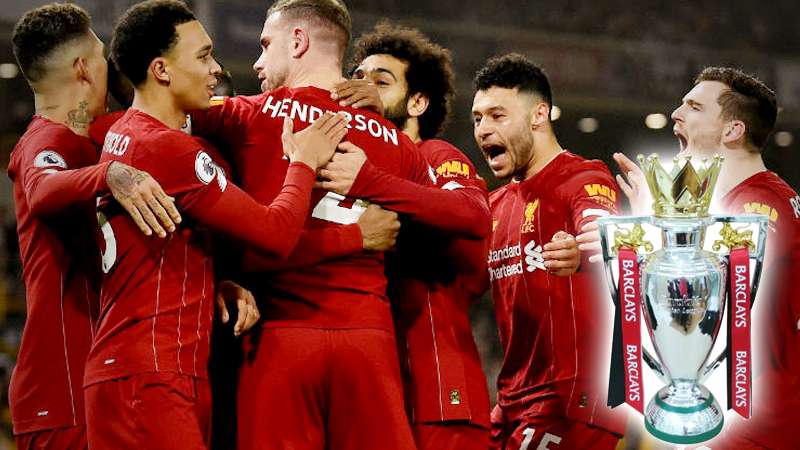 As they have done without pause for more than a half-century, Liverpool FC supporters serenaded the lads in red Saturday with hearty versions of "You'll Never Walk Alone," the Rodgers and Hammerstein show tune turned soccer anthem.

At Anfield, the fabled stadium in Merseyside, a nervy and scoreless 45 minutes gave way to a dominant second half and a 4-0 victory over Southampton.

Sixteen consecutive victories, 25 matches without a defeat this season and 42 over two campaigns, a trophy in clear view.

Liverpool might never walk alone, but in this near-perfect season, the Reds are by themselves atop the Premier League standings, nary a challenger in sight. Manchester City, the reigning champion, is second, 22 points behind - the largest gap in league history.

"When we are rolling," Manager Jürgen Klopp said, "it's difficult to stop."

Last year, the race came down to the final day and City finished a point ahead of Liverpool.

With 13 matches left this year, it is not a race; rather, it is a 3 1/2-month coronation before Liverpool is handed its first Premier League trophy since the circuit's launch in 1992. Manchester United has won the title 13 times, Chelsea five and City four.

Even Blackburn Rovers, currently a struggling second-division side, has won the championship.

Liverpool's last top-flight title came in 1990 in the old first division, the Premier League's predecessor. Between 1973 and 1990, the Reds won 11 league crowns.

In the absence of Premier League success, Liverpool has enjoyed the riches in other competitions: three FA Cups and four League Cups the past 30 years, plus the 2004-05 and 2018-19 UEFA Champions League titles and 2000-01 UEFA Cup and 2019 FIFA Club World Cup trophies.

The league championship, however, has remained elusive until now. Klopp's forces have claimed 73 of a possible 75 points, a remarkable total given the competitiveness in the world's most popular sports league. The only slip came in late October at United, when Adam Lallana's late goal avoided defeat and secured a 1-1 draw.

Over two seasons, Liverpool is 54-1-8, with the lone defeat coming at Manchester City 13 months ago.

The Reds have conceded one goal in the past 10 matches and 15 overall.

Among the biggest European leagues, no other front-runner is unbeaten, though Real Madrid has lost once (with seven draws) in Spain's La Liga and Juventus has fallen twice (with three draws) in Italy's Serie A.

Klopp, an energetic and engaging German who arrived from Borussia Dortmund in October 2015, continues to play down Liverpool's excellence.

"We're not even close to being perfect," he said. "We just look to use our skills in the best possible way. The boys have done that for a while pretty good, and that's why we have these numbers."

On Saturday, Liverpool marched on without one-third of its sensational frontline: left wing Sadio Mane (hamstring injury). His replacement, Alex Oxlade-Chamberlain, cracked open the scoreless deadlock two minutes after intermission with a sensational strike from the edge of the penalty area.

That goal and two others were assisted by center forward Roberto Firmino. Midfielder Jordan Henderson scored in the 60th, and right wing Mohamed Salah added two late goals to raise his team-best total to 14 and help improve the club's goal differential to plus-45.

"We started the second half well," said Henderson, who set up Salah's first goal with a gem of a pass, "and kicked on from there."

Liverpool is balancing several championship pursuits. On Tuesday, the FA Cup resumes with a fourth-round replay at home against Shrewsbury Town.

On Jan. 26, using a young squad, the Reds squandered a two-goal, second-half lead on the road against the third-division opponent and settled for a 2-2 draw.

For the second meeting, Klopp will again rest his regulars.

In two weeks, attention returns to the Champions League as Atletico Madrid hosts the first leg of the round-of-16 encounter. Other heavyweights remain in contention: Barcelona and Real Madrid, Chelsea and Manchester City, Juventus and Paris Saint-Germain.

Liverpool, though, shows no signs of relinquishing the European title or tossing away its mighty grip on the Premier League trophy.

Despite their prosperity, Klopp and his immaculate team are not content.

"I promise you, I don't lie: We don't feel it. We just don't feel it," he said. "The day before a game, my main feeling is, I'm concerned. I am a very optimistic person but not before a football game because I know long enough anything can happen. The ball rolls in different directions."

Maybe so, but in this extraordinary season, everything has rolled in Liverpool's direction.