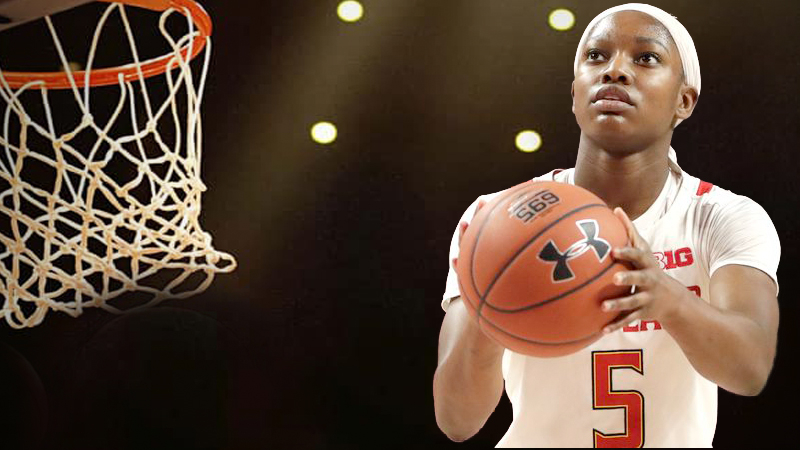 BLOOMINGTON, Ind. - Kaila Charles did not like how this night was going. Maryland was playing in front of a hostile crowd that cheered every minor mistake made by the Terps, who trailed an Indiana team that couldn't seem to miss. The previously rock-solid defense that had led Maryland to seven consecutive wins was gone, suddenly buttery soft in the paint.

So the senior guard responded by bringing her own energy, scoring a game-high 21 points to go with 11 rebounds as the No. 13 Terps turned a six-point halftime deficit into a 79-69 win over the No. 18 Hoosiers at Assembly Hall.

Charles was a one-woman cheering section on court for Maryland. She unleashed megawatt smiles and clapped hard, her hands raised, as the Terps unleased a furious third-quarter rally. After a defensive stop - rare in the first half, regular in the second - she would thrust both fists in the air and hold them there as she ran down the court, looking up at the crowd as if daring it to reply.

"Every time we made a stop on defense or a great play, I just loved celebrating to get the team energy's up to make sure we were hyped," Charles said.

Neither team led by more than 10 points, and neither had a run of more than seven at a time. It was the Terps' defense that ultimately created separation as Maryland notched its fifth win over a ranked team.

"We came out in the exact same defense that we started the game with," Maryland Coach Brenda Frese said. "It's just the intensity, for us, went to a higher level."

Ratcheting up the defense as the game led to a 22-7 advantage in fast-break points and a 13-6 edge in second-chance points. It was one such putback, from sophomore forward Shakira Austin, that got the Terps off to their 12-3 run to start the third quarter.

Maryland was in rhythm after that and earned its biggest lead of the night at 55-45 off a free throw from Diamond Miller.

"You're not going to beat a team like Maryland if you can't stay with them, within arm's reach, each quarter. The third quarter really did us in," Indiana Coach Terri Moran said. ". . . There were moments where they were flying down the floor and we hadn't even turned around. And that was disappointing to watch."

Indiana had exactly the start it needed to begin the game. Held to 44% shooting from the field when these teams met in College Park last month - a fine shooting night, but not good enough to beat a Maryland team in stride - the Hoosiers could hardly miss at home, shooting 59.3% in the first half.

They beat the Terps in the same couple of spots under the basket throughout the first quarter to take an eight-point lead with 40 seconds to go before Maryland closed the period with two buckets to make it 23-19. Indiana shot 14 for 19 through the first 13 minutes of the game, but it wasn't just that they were hot. The Hoosiers were hitting the type of second-chance buckets at the end of the shot clock and demoralizing three-pointers that can drain the life out of teams.

Freshman guard Ashley Owusu was just behind Charles with 19 points and five assists. Guards Taylor Mikesell and Blair Watson added 10 points apiece and the road win ensured that Maryland ended the week as strongly as it started.

On Monday, the NCAA selection committee released its list of who the top 16 teams in the tournament field would be if the NCAA tournament were to start at the beginning of the week. The Terps were a No. 2 seed, one of three Big Ten teams on the list alongside Northwestern and Iowa, which were both No. 4 seeds.

Maryland lived up to that high billing Thursday, following its resounding win over a shorthanded Michigan State team on Monday with the emphatic road win over the Hoosiers. Ali Patberg led Indiana with 16 points in its first loss in four games.

"It's a special win, road wins are precious," Frese said. "For this team, where they were really exposing our defense in the first half, staying committed and true to it to bounce back in the second half just goes again to their growth and their maturity. When I walked into the locker room at halftime and heard [them say] 'control what you can control,' I knew their mentality was in the right place."