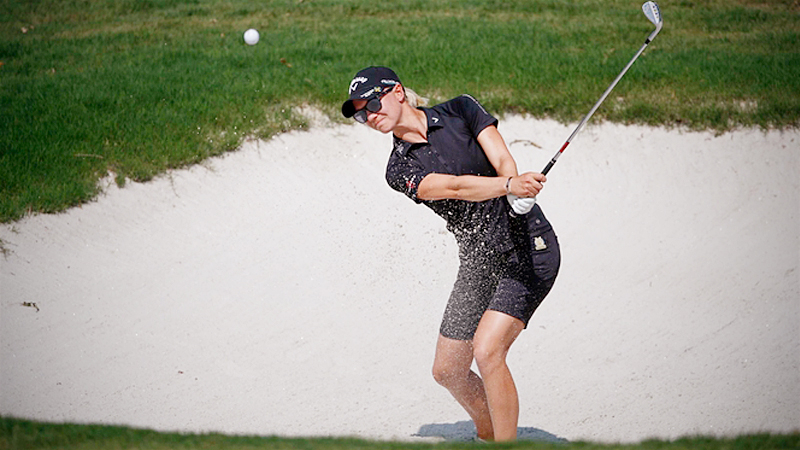 For the fifth consecutive round, Sweden’s Madelene Sagstrom is atop the LPGA Tour leaderboard. The 27-year-old leads the ISPS Handa Vic Open at -13, having followed Thursday’s 65 with a round of 5-under 67 on the Beach Course.

Two weeks ago, the 2015 graduate of Louisiana State University held the lead after the last three rounds of the Gainbridge LPGA at Boca Rio, where she became a Rolex First-Time Winner.

“I think when you come off such a high, you don't really know what to expect, like ‘can you keep it going or am I going to start over’ kind of thing,” said Sagstrom. “I'm really happy that I put myself in the position that I'm in, and being able to keep up really good play, especially keeping it rolling really nice on the greens. If you roll it good, you need to make putts to be in contention.”

American Ally McDonald is solo second at -12 and looks to join Sagstrom as a first-time LPGA Tour winner. The 2019 USA Solheim Cup team member is bogey-free for the tournament, carding eight birdies in her first 12 holes on Friday before parring her way home.

“After I hit the ball really well yesterday, I was hoping to go out and make a lot of birdies and I did,” said McDonald. “I started the round 8-under through 12 and the wind kind of picked up. Just didn't have any really close looks at birdie in the last six holes, but very, very pleased with where I'm at.”

Second-year LPGA Tour player Linnea Strom sits third at -10, tied with 2019 KLPGA Tour Rookie of the Year Ayean Cho and Australian Robyn Choi, who made back-to-back eagles in her round of 8-under 65 on the Creek Course. Choi played holes 7-11 on the Creek Course at -7, opening with the two eagles and following with three birdies.

LPGA Tour rookie Haley Moore, who started the day one stroke off the lead, was +2 through nine holes but turned things around on the back nine. She played her final nine holes in -3 to card a second-round 71 and heads into the weekend tied for 11th at -8.

Following the second round, the field was cut to the top 60 professionals and ties at -3, with two amateurs also making the cut. The third and fourth rounds will both be held on the Beach Course. Defending champion Celine Boutier shot 72-72 and missed the cut at -1 overall. Other notables to miss the cut include Dame Laura Davies, who followed her first-round 67 with a 77 on Friday to finish at -1, and Australian golf legend Karrie Webb, whose second-round 70 left her three shots off the cut line at Even.

Two years, two very different outcomes at the ISPS Handa Vic Open for Ally McDonald. The 27-year old from Fulton, Miss., shot 77-71 in 2019 to miss the first cut at 13th Beach Golf Links. One year later and she’s just one stroke off the lead, her second-round 65 tied for the third-lowest round of her LPGA Tour career.

“Last year I was still in a little bit of a swing change transition and I have a better grasp for sure beginning of this year,” said McDonald, a two-time First-Team All-American at Mississippi State University. “Short offseason, so I feel like I've kind of rolled out of CME quickly into Boca. Yeah, I'm just happy to be here, happy that I played a lot better these last two rounds than I did last year.”

McDonald enjoyed the best season of her career in 2019. She made 18 cuts in 25 tournaments, including her last 11 consecutive, and earned three top-10 finishes, including a tie for 10th at the U.S. Women’s Open. Thanks to that success, USA Solheim Cup Captain Juli Inkster brought McDonald with the team to Gleneagles, and McDonald was called into service when Stacy Lewis was forced to withdraw due to injury.

“I think it was huge for my career and a big confidence boost for me, just where I see my career heading in the next few years,” said McDonald, who ultimately went 1-3-1 for Team USA. “I definitely want to be part of another one now that I've got one.”

MADELENE SAGSTROM IN HER OWN WORDS – DEAR LITTLE MADELENE

On Thursday, the LPGA debuted a new #DriveOn social video featuring a letter written by Madelene Sagstrom to her younger self. Following her victory at the Gainbridge LPGA at Boca Rio, Sagstrom felt called to tell her story of overcoming self-doubt to become a winner on the LPGA Tour.

“I was kind of hit by the moment of winning and I was like, this is like everything that I have done has led up to this,” said Sagstrom. “All the times I've been sitting here doubting myself and being hard on myself, like yes, it got me here, but I just wish you would have been a little bit nicer to yourself. So I think that for me it kind of was reflecting, going back, okay, where did you come from and how far did you get.”

I know they think you’re a little crazy right now. You’re dreaming big, you’re determined, you know what you want. One day your plans and dreams will unfold. You’ll move across the world and play against the best players in the world. You will play on the biggest stage in women’s golf. You’ll travel across continents and meet the most amazing people along the way.

I know it’s easier for you to be hard on yourself, to doubt yourself and not think you’re good enough. Please little girl, be nice to yourself. You’re so much greater thank you can ever imagine right now. You’re so worthy and perfect just the way you are. Don’t ever stop fighting, your time will come! Don’t ever stop dreaming!

All the love from 27-year-old Madelene

This week’s ISPS Handa Vic Open is the season debut for the Republic of Korea’s Jeongeun Lee6 and kicks off her second season on the LPGA Tour. Her 2019 rookie campaign included a major win at the U.S. Women’s Open en route to Rolex Louise Suggs Rookie of the Year honors. So it’s no surprise that Lee6 is setting lofty goals for 2020.

“I want to play at the Olympics and win three times,” said Lee6 after Friday’s 4-under 69 on the Creek Course at 13th Beach Golf Links.

Lee6 is well on her way to checking both boxes. She sits five strokes off the lead heading into the weekend and currently holds the fourth and final spot on Team Korea for the 2020 Summer Olympics in Tokyo.

The Olympic field is restricted to 60 players for each of the men’s and women’s competitions, with countries allowed up to four participants in each field if those players are within the top 15 in their respective world rankings.

2006 U.S. Open champion Geoff Ogilvy has long been an unofficial ambassador for gender equality in sports. Currently tied for seventh in the men’s competition at the ISPS Handa Vic Open, Ogilvy penned a first-person piece for LPGA.com discussing his thoughts on why this week's competition is an example for the future of the game (click the link for his full letter):

“I’ve always been a fan of the women’s game but not to the degree I am now. I couldn’t watch the LPGA Tour, LET or ALPG that much throughout my career because I was playing at the same times as the women. I would always catch the ANA Inspiration, the old Dinah Shore, out in the California desert because it felt like The Masters for the LPGA Tour. It was fun to settle in and watch because it always aired later in the day on the East Coast. And I’ve always enjoyed the U.S. Women’s Open because I like seeing how the women battle USGA setups.

“But the event that changed a lot of thinking was the 2014 U.S. Open and U.S. Women’s Open played back-to-back at Pinehurst No.2. A lot of people didn’t think back-to-back championships would work, but it turned out to be a revelation. Not only could the men and women compete on the same course, they could do it under virtually identical conditions.

Jing Yan made the third hole-in-one of the 2020 LPGA Tour season, acing the 154-yard third hole of the Beach Course with a 7-iron. It was her fourth career hole-in-one and first in a competitive round.

“I wanted to hit a 6-iron, but then it was kind of in between clubs, so talked to my caddie and we went with a 7,” said Yan. “Just carried the bunker. Hit the shot with a little bit of a draw. Really liked the look of it, but I didn't really think it was going to go in the hole. Then my fellow players and caddies are like, ‘Oh, there's a chance of it going in.’ I didn't see it go in, but yeah, it went in and I was pretty happy about it.”

For that ace, CME Group will donate $20,000 to St. Jude Children's Research Hospital, which is leading the way the world understands, treats and defeats childhood cancer and other life-threatening diseases. The 2019 LPGA Tour season saw 32 aces from 31 different players, which more than covers the average cost of $425,000 needed to treat a pediatric cancer patient.

Yan ultimately shot +2 on the day and missed the cut at +2 overall.