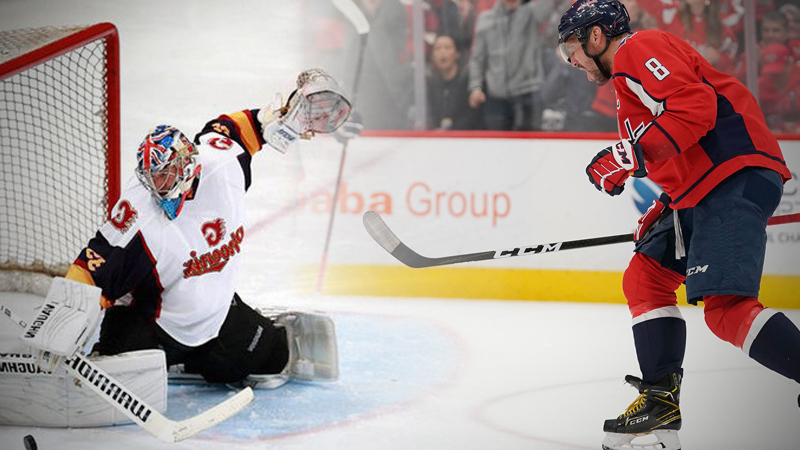 WASHINGTON - Washington Capitals captain Alex Ovechkin is two goals shy of the 700th of his NHL career, and Saturday night for the first time, that feat is achievable in his next game.

After three days of practice since he his first career natural hat trick Tuesday against the Los Angeles Kings, Ovechkin has a chance to become the eighth member of the 700-goal club against the Philadelphia Flyers at Capital One Arena. His next chance would be Monday at home against the New York Islanders and former coach Barry Trotz.

"I know he wants to get it out of the way, so hopefully he gets it done as soon as possible," Nicklas Backstrom said. "It's a nice milestone, and it's been incredible watching him for this many years and hopefully for more years too. I think me personally, I am just happy for him."

If Ovechkin scores twice Saturday, he will become the second-fastest player to reach that 700 mark and also the second-youngest, trailing only Wayne Gretzky. Ovechkin has been on a scoring tear, with 16 goals in 10 games, including three hat tricks. He is on pace for a 61-goal season, which would be the first time he surpasses the 60-goal mark since he getting 61 in 2007-08.

Ovechkin said he would like to be able to hit the milestone in front of the home fans, knowing he has two chances before the Capitals embark on a three-game trip. The Capitals have asked the NHL for permission for his teammates to jump over the boards and onto the ice to congratulate the captain whenever it happens.

"Yeah obviously it is just going to happen sometime, hope it is next game, but if not, that is OK," Ovechkin said. "We have another one."

As for any strategy Saturday against the Flyers, Capitals Coach Todd Reirden said that if Ovechkin got his 699th goal early, he wouldn't shy away from playing him extended minutes to give him a better chance at reaching 700.

"He's a guy that once he gets rolling early in the game, I tend to play him a little more so I don't think I would sway from that theory, especially if we have a chance to do it at home," Reirden said with a laugh.

Another scenario is if Ovechkin is sitting at 699 career goals, but the Capitals are up late and the Flyers pull their goaltender, would Reirden put Ovechkin in, so he could score an empty-netter as his 700th career goal?

"I don't think he'll care," Reirden said. "Right now he's earned that opportunity to be out there because he's making the right decisions defensively. You know, it is not something that you just put him out there because he will score goals. He went after this opportunity, and he's deserved the chances he's getting."

Ovechkin scored an empty-netter Tuesday against the Kings to complete his first career natural hat trick.

"This is part of how his game has evolved . . . we want to win games, and as a byproduct he scores goals," Reirden said.

In his chase to 700, Ovechkin has been keeping pucks, sticks and gloves for his collection. The NHL may be taking some of those items to catalog. Ovechkin has collected so many items over the years, his house in Russia and in Virginia is starting to overflow.

"To be honest, right now I have a lot, and my wife tells me to stop," Ovechkin said. "We don't have any space in our gym, but it is great for my family, kids, grandkids, you know, when I'm going to be dead. My kids are going to look at it and appreciate it."

As for Saturday's game against the Flyers, the team knows not to force things to Ovechkin, even though they share the excitement over the milestone. However, with Saturday's game being against a divisional team against whom they lost to in a poor showing last month, the Capitals can't afford to lose focus.

Backstrom said the team also gets a bit of a boost knowing what is at stake from Saturday onward, and added that Ovechkin's recent tear hasn't surprised anyone.

"He is that talented," Backstrom said. "He has that goal-scoring instinct that no one else has, or a couple guys. It's impressive what he is doing."

As of Friday, Ovechkin has a league-leading 40 goals.

"Now that we are closing in on it, it's becoming a reality," Reirden said. "I think he will be happy to move past it as well and continue to focus on improving our team and do the things he can do to develop as a player and go about it more under the radar more than he has been recently."