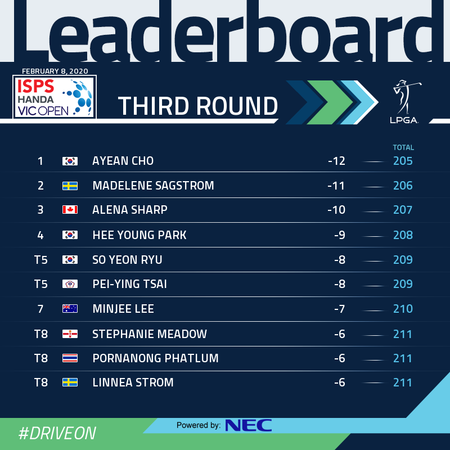 It was a Saturday of survival at the 2020 ISPS Handa Vic Open.

With steady winds all day and gusts to 30 MPH, 19-year-old Ayean Cho returned a 2-under 70, one of just five under-par rounds, and surged to the top of the leaderboard at -12. Cho, the KLPGA Tour’s Rookie of the Year in 2019, carded five birdies and three bogeys in the day’s blustery conditions, including a birdie at No. 18 to pull one stroke clear of the field.

“It was very windy, so my shots were not as good as yesterday,” said Cho through an interpreter. “But my putts were good so I could finish the holes with good putts.”

If Cho emerges victorious on Sunday, she would be eligible for immediate LPGA Tour Membership. She could also defer that Membership to the 2021 season.

Sweden’s Madelene Sagstrom, who held the lead after each of the first two rounds, stumbled to a 2-over 74 on Saturday, but birdied the final hole to stay within one stroke of the leader. She remains in contention to become the first player since Shanshan Feng in 2017 to win consecutive events.

“I think around seven, eight, I was like are we actually going to make it? I was like am I going to get a ball in the hole today?” said Sagstrom, who had one eagle, one birdie, two pars, three bogeys and one double bogey in her first eight holes. “It was definitely a grind out there. It was really, really difficult and then the breeze got so, so hard.”

Canadian Alena Sharp rounds out the top three at -10, joining Cho in the under-par group after shooting 2-under 70 on Saturday. She is aiming for her first career LPGA Tour victory in her 313th start.

“Warming up today I just kept the ball low,” said Sharp. “Very thankful that I had a nice lesson from my coach a few weeks ago. He's actually an Aussie, Brett Saunders, and we worked on keeping the ball down with my wedges and I just did it with every club today. And I think it helped keeping the ball lower, spin control, and I was right around the greens when I missed the greens, so I think it really helped me get a good score today.”

Korea’s Hee Young Park is fourth at -9, with So Yeon Ryu and Pei-Ying Tsai tied for fifth at -8. Ryu took advantage of playing in the morning wave, shooting the round of the day at 4-under 68 in relatively calmer wind conditions.

Sunday’s final round will include one group of players from both the men’s and women’s competitions. The LPGA Tour’s Peiyun Chien will tee it up alongside the European Tour’s Geoff Ogilvy and Sam Horsfield.

At 38 years, 11 months and 1 day of age, Alena Sharp would become the second-oldest first-time winner in LPGA Tour history, behind Fay Crocker, who was 40 years, 6 months and 18 days of age when she won the 1955 Serbin Open

Alena Sharp has come close to victory before. Perhaps this week at the ISPS Handa Vic Open will finally be her time. The 38-year-old Canadian is competing in her 313th career LPGA Tour event and sits two strokes off the lead, tantalizingly close to a breakthrough first victory.

“I don't really think about winning but know that it's there and really just stay in one shot at a time like I did today,” said Sharp. “I didn't get ahead of myself, it was one shot after the next. It wasn't, oh, I've got to hit a good drive on this next hole. No, I've got to make this putt first. Really stay in the present and stick to the process.”

Sharp’s best career LPGA Tour result came at the 2016 CP Women’s Open, where she finished fourth. She has 12 other top-10 finishes, including a tie for sixth at the 2019 ISPS Handa Women’s Australian Open.