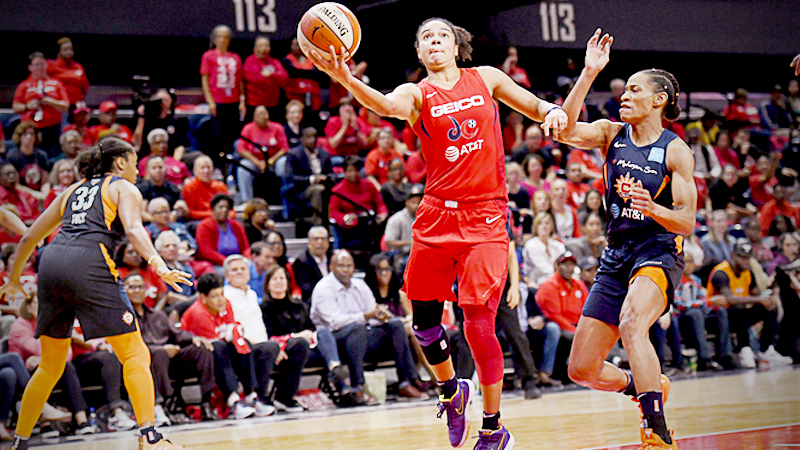 Kristi Toliver helped lead the Washington Mystics to their first WNBA title over the summer. MUST CREDIT: Washington Post photo by Katherine Frey

Months after helping steer the Washington Mystics to their first WNBA championship, Kristi Toliver is leaving the franchise. The point guard signed a three-year free agent deal with the Los Angeles Sparks on Monday in a move that sends her back to the organization with which she spent seven years of her career.

Mystics Coach and General Manager Mike Thibault said in a phone interview that Toliver is the only one of Washington's top three players from last year's championship-winning team he expects to leave. Although both 2019 WNBA MVP Elena Delle Donne and 2019 WNBA Finals MVP Emma Meesseman are unrestricted free agents, Thibault said he has verbal agreements from both players that they will return to the Mystics in 2020.

"The players that were major factors in our team are all going to be here other than Kristi," Thibault said.

Toliver, meanwhile, is returning to the team with which she won the 2016 league title, her first.

"I'm going to miss my teammates and coaches and the fans a ton," Toliver, a three-time WNBA all-star, said in a phone interview. "But, you know, the business of basketball makes you have to make tough decisions. This was certainly one of them. . . . To get to back-to-back Finals and come up with one - winning a championship was the ultimate goal. Obviously very thankful and blessed that I was able to have this experience in D.C. and help bring a winning culture, a championship, to the city and to the organization. I couldn't be happier with the past three years."

Toliver, who signed with the Mystics as a free agent in February 2017, will continue working as an assistant coach for the NBA's Washington Wizards. Come the WNBA season, her departure will leave the Mystics thin at the guard position - but that's nothing new for Washington.

In 2019, Toliver averaged 13 points per game, third most on the team, and 5.9 assists, a team high, but she played just 23 games because of a knee injury suffered in August. Without her, the Mystics got creative, sliding Natasha Cloud to the point guard position and occasionally employing a lineup with three bigs on the floor. They thrived despite the unorthodox situation, posting a 10-1 record and locking up the top seed in the WNBA playoffs in Toliver's absence.

Thibault said Monday that he is trying to bolster the guard position. The team's top draft pick from 2019, Kiara Leslie, missed last season with a knee injury but is expected to return in 2020 and should help beef up the guard spot.

"Our one solution was to play the bigger lineup last year, and that will be a part of our plan going forward," Thibault said. "It was effective. It put our best players on the floor for more minutes. . . . Our team feels good about what we did during that time when Kristi was out. And we'll have to play a little bit differently, but we got some other things that we think will address some of it."

While the terms of Toliver's deal were undisclosed, both Thibault and Toliver said her departure ultimately boiled down to business.

Thibault said his long-term goal is to keep together as much of the Mystics' championship-winning core as he can. But balancing salaries for three of the league's top players while accounting for a handful of talented young players who will hit free agency in the coming years proved impossible.

"We were offering basically the same contract that she was offered somewhere else. The difference ended up being in the last year on the contract, the third year," Thibault said. "I think that there's a couple realities at play here with the new collective bargaining agreement that are the biggest factors. One is that we have four or five other players that are going to become free agents over the next two years. And we needed to make sure that when those things occurred that we can try to keep as many of our good young players here on our team.

"As a GM, you just can't jeopardize the long-term future of your team in that situation. I'm sad that [Toliver] is leaving. I wish we could've put that group out there. But she had to make a decision she was comfortable with for the long term."

Thibault believes the challenge Washington faced could become a common one for teams around the league with the WNBA's new CBA in place. The maximum annual salary for top players increased from just over $100,000 last season to $215,000 in the new deal, which was agreed to last month, while the league's salary cap increased 31%, to $1.3 millionb in the first year of the deal.

Even with the salary cap increase, Thibault believes the new labor deal could make teams skew top-heavy, with a few big talents anchoring each team.

"You're not going to see teams that have nine or 10 long-term, veteran players on them. It just is not going to happen. They'll be [top-heavy] or top and bottom and not a lot in the middle," Thibault said. "The biggest fallacy in all of this new collective bargaining agreement is that the cap went up 31%. The reality is, if you pay two players, your top players, in the range of the individual max, which went up 85%, the reality is paying the rest of your team is not at that 31% raise. A few people get that, and a few people don't get that. Managing that is going to be interesting for several teams."

As for the Mystics' remaining top players, Thibault gave no update on Delle Donne's status as she recovers from what the team called "minor back surgery" on Jan. 24 to repair herniated disks that were pinching a nerve. Delle Donne is expected to be ready for the start of the season, which for the Mystics comes May 16 against Toliver and the Sparks in Washington.

Thibault also said that when Meesseman returns he expects the Belgian national to spend most of the WNBA season in Washington. The forward often spends part of the season playing overseas for her national team and missed 11 games last year. Thibault expects her to miss about five games this year.

"We're looking at, long-term, keeping the rest of our core together," Thibault said. ". . . We're hoping to sign one more player in free agency that will help. I'm not going to talk about it until I know it's done. Then we'll figure it out from there. We're operating from a position of strength, not weakness."