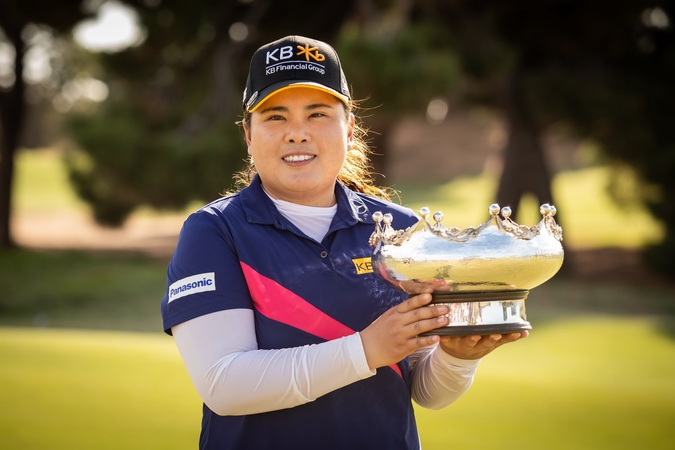 For the 20th time in LPGA Tour history, Inbee Park is a winner. Two years removed from her last victory, the 31-year-old from Seoul captured the 2020 ISPS Handa Women’s Australian Open, finishing at -14 overall for a three-stroke win over American Amy Olson.

For much of the final round, Park looked almost untouchable. After starting the day with a three-stroke advantage over Ayeon Cho and despite an opening bogey, Park extending the lead to as many as six strokes. But the LPGA Hall of Fame Member showed signs of faltering, carding bogeys at holes 9, 14 and 16. Par saves were much of her story, with Park pointing to her up-and-down from a greenside bunker at No. 15 as a turning point in her round.

“Those clutch putts, those par-saving putts have been going in. That’s why I haven’t been losing a lot of shots when I was in trouble,” said Park. “I think that really came down, maybe a couple of strokes every day, that’s 8 at the end of the week.”

Carrying a two-stroke lead to No. 17, Park dropped a 5-foot birdie to pull three shots clear of Olson. After a two-putt par at No. 18, Park raised her arms to the sky in celebration of a hard-earned 20th victory.

“The front nine was a little bit easier for me, but the back nine was probably hard for everyone,” said Park. “The wind was blowing really hard and I made a couple of bogeys, which can happen. I didn’t really have that many birdie opportunities on the back nine. The back nine was playing brutal. It was really hard. I just told myself that if I could just keep making pars it’ll be good enough.”

Olson carded four birdies and one bogey on Sunday to keep Park in her sights but came up just short of her first victory. It was Olson’s second career runner-up finish, after the 2018 Evian Championship.

“I made some adjustments with my putting over the weekend last week and I’m just pleased to have seen that really hold up under pressure,” said Olson. “That was a lot of fun and I’m just looking forward to this year. I think I’ve got some solid fundamentals and good stuff to build on. It’s a good momentum boost.”

France’s Perrine Delacour finished solo third at -10, the best finish of her LPGA Tour career. American Marina Alex and China’s Yu Liu rounded out the top five, tied for fourth at -9. Liu is donating 50% of her earnings so far in 2020 to virus relief efforts in her home country.

Defending champion Nelly Korda shot 3-over 76 on Sunday to finish in a tie for 41st at -2 overall.

ALL ABOUT THE PUTTING FOR INBEE PARK

Take it from the queen of the greens. According to Inbee Park, putting is the most important aspect of the golf game. She is known as one of the best putters ever to play the game. But for the last few years, Park admits that she hasn’t quite been herself with her short game.

“My putter really hasn’t been working the last couple of years,” said Park. “I felt like I was hitting the ball just fine, just like (when) I’ve won before, just like when I was hitting in 2013/14 when I was winning majors. Just the putter was different. So, I was just trying to get that putter back. This week has been a really great putting week.”

CRISTIE KERR STILL HAS A TASTE FOR THE GAME

Now in her 24th season on the LPGA Tour, Cristie Kerr remains a force to reckoned with on the golf course. After opening the ISPS Handa Women’s Australian Open with a disappointing 3-over 76, Kerr played her next 54 holes at a combined 10-under par. Her final round 4-under 69, Sunday’s only sub-70 round, pulled her into a tie for sixth at -8.

“Golf has always been one of my first loves and it’s just really hard.,” said Kerr, who nearly aced the par-3 16th. “When you play well, like I did today and the last couple of days, you just kind of feel invincible. Golf keeps you young. The sport keeps you young and it never gets old.”

Kerr was playing in just her third Women’s Australian Open and notched her career-best finish. She tied for 13th in 2018 at Adelaide’s Kooyonga Golf Club and tied for 51st in 2012 at Royal Melbourne Golf Club.

The CME Group Cares Challenge is a season-long charitable giving program that turns aces into donations. CME Group donated $20,000 for each hole-in-one made on the LPGA Tour in 2019, with a minimum guaranteed donation of $500,000 to St. Jude Children's Research Hospital, which is leading the way in how the world understands, treats and defeats childhood cancer and other life-threatening diseases.

In Friday’s second round, Mel Reid made the fourth hole-in-one of the 2020 LPGA Tour season, acing the 172-yard 12th hole with a 6-iron. It was her eighth career hole-in-one and fifth in a competitive round, and it brought the season total to $80,000 donated.

The 2019 LPGA Tour season saw 32 aces from 31 different players, for a total of $620,000 donated to St. Jude Children’s Research Hospital. This more than covers the average cost of $425,000 needed to treat a pediatric cancer patient.

For the third consecutive year, the LEADERS Top 10 competition will award $100,000 to the player with the most top-10 finishes prior to the CME Group Tour Championship, with Ariya Jutanugarn (2018) and Jin Young Ko (2019) earning the first two awards.