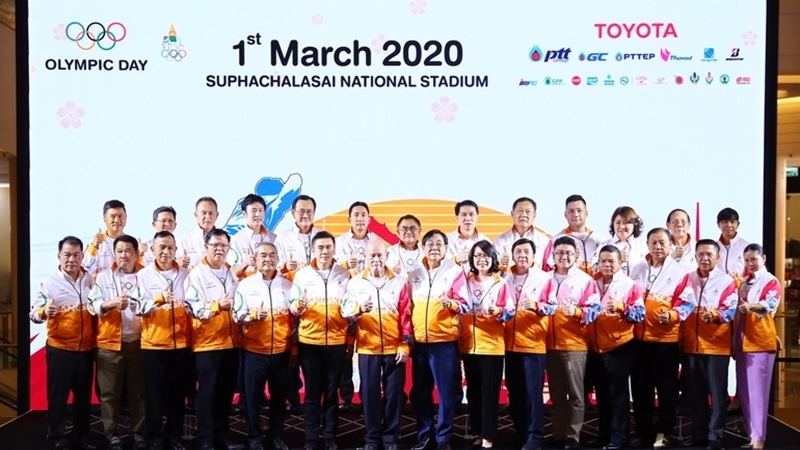 Pichai Chunhavajira, Vice President of the National Olympic Committee of Thailand (IOC), together with representatives from main sponsors, held a press conference for the 2020 Olympic Day Walk & Run scheduled for Sunday (March 1) at Suphachalasai National Stadium.

The event consists of two races: a 5-kilometre Fun Run and a 10-kilometre Mini Marathon and is being organised by BEC-Tero Entertainment. Registration for each race costs Bt370 per runner and the 8,000 places have already sold out.

​The 5-kilometre Fun Run will feature 3,000 runners (without timing chip) and the 10-kilometre Mini Marathon (with timing chip) will include 5,000 runners. Both distances have no age restrictions and the event is sanctioned by the Athletics Association of Thailand and Asian Athletics Association. The 10-kilometre race starts at 5 am while the 5-kilometre race starts at 5.30 am, with runners in both events setting off from Suphachalasai National Stadium. The route takes in Bantadthong Road, Rama 4 Road, Witthayu Road, Rama 1 Road before heading back to the National Stadium. The first three male and female finishers in each race will receive a commemorative plate while the first 100 male and female finishers will also receive a finisher’s T-shirt. The event will be broadcast live on Channel 3 from 5 am to 6 am.

​All participants will receive a T-shirt to run in, a memorial Olympic medal, a certificate from the IOC and the chance to win various awards such as tyres from Bridgestone.

Pichai, in his capacity as the Olympic Day 2020 committee chairman said, “Olympic Day 2020 is a way to promote awareness of the importance of exercising and a healthy lifestyle for people of all genders and ages. I must thank all the sponsors from both the private and public sectors as well as the people involved , making this event possible. More importantly, I thank all the eager participants who took up the challenge quickly as we can see that all places have already been sold out. We only accepted 8,000 runners this year to avoid overcrowding.

​“Last year’s event was a tremendous success. It was high-quality in an accessible location with plenty of parking and facilities. The application fee was not expensive, only Bt370, and the designs for the T-shirts and medals were beautiful. This year’s design has Thai and Japanese landmarks on it to represent the 2020 Olympic Games which will be held in Tokyo.

​“Preparations are 100 per cent on track. There will be many staff along the route to attend to the runners’ needs. After the races, entertainment will be provided by artists from The Voice TV show. Moreover, there will be food, both main courses and dessert, for all participants. This year, we are mindful of the problem of waste that the world is facing and will provide a space for waste management to facilitate recycling. We hope that everyone will have a good time on Sunday, March 1”.