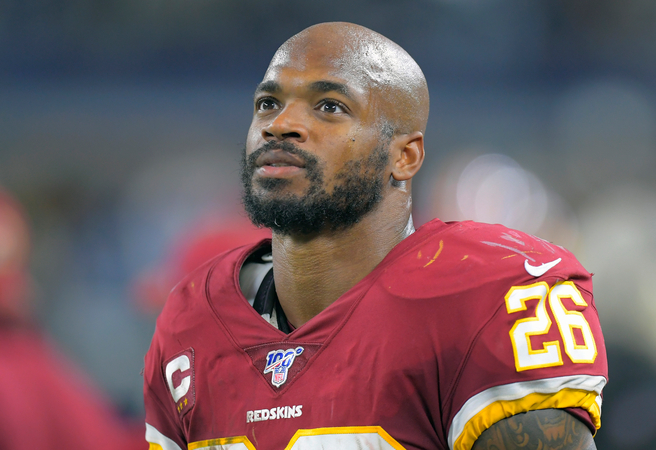 With uncertainty in their offensive backfield and needs to fill elsewhere, the Washington Redskins exercised their option on running back Adrian Peterson's contract for the 2020 season.

Peterson signed a two-year, $5.03 million contract in March that was filled with incentives. The deal calls for Peterson to make $3 million in salary and bonuses this coming season.

Though Peterson is 34, an age when most running backs are in decline, he has been one of Washington's most-dependable offensive players the past two seasons, rushing for 1,940 yards and 12 touchdowns. At the start of last season, former Redskins coach Jay Gruden tried to move away from Peterson, believing second-year back Derrius Guice's versatility was a better fit for the team's offense than the more straightforward Peterson. But Guice wound up missing much of last season because of knee injuries and has played just five games in two years. Third-down back Chris Thompson is a free agent, and Bryce Love, a third-round pick in April's NFL draft, missed all of last season recovering from a torn ACL.

"Adrian Peterson is the epitome of what it means to be a pro in this league," Redskins Coach Ron Rivera said in a statement. "Adrian's leadership and passion towards the game of football will set an example of what is expected of the players in this program moving forward."

Peterson has talked a lot about wanting to break Emmitt Smith's career rushing yards record, a considerable challenge considering that he needs 4,139 more yards. Peterson is fifth on the career rushing list, with 14,216 yards.

By picking up Peterson's option, Rivera continues to shape the Redskins' roster ahead of next month's free agency. On Friday, he released cornerback Josh Norman and receiver Paul Richardson. Rivera still has to decide whether he is going to keep pass rusher Ryan Kerrigan, who is set to make $11.7 million next year, whether to use the franchise tag on guard Brandon Scherff and see whether star left tackle Trent Williams will return after missing last season in a dispute with former team president Bruce Allen.