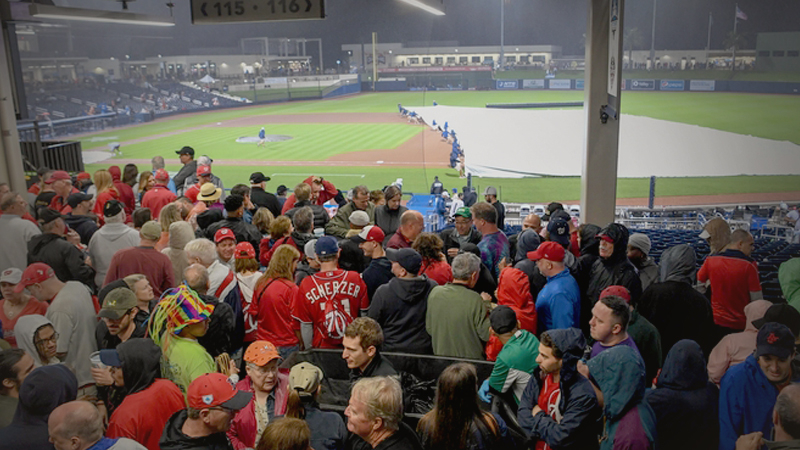 Fans jam the concourse to get out of the rain as the grounds crew puts the tarp on the field during the Washington Nationals' game against the Houston Astros at the Ballpark of the Palm Beaches in West Palm Beach, Florida, on Saturday, Feb. 22, 2020. MUST CREDIT: Washington Post photo by Jonathan Newton

WEST PALM BEACH, Fla. - There was a game here Saturday night, the Houston Astros participated and, in an upset, the world did not explode.

But there was a lot of booing, and a little bit of jeering, and one Washington Nationals fan brought a metal trash-can lid. Then it poured. Welcome to baseball in 2020. And welcome to the next eight months, Astros, because much more of this awaits. 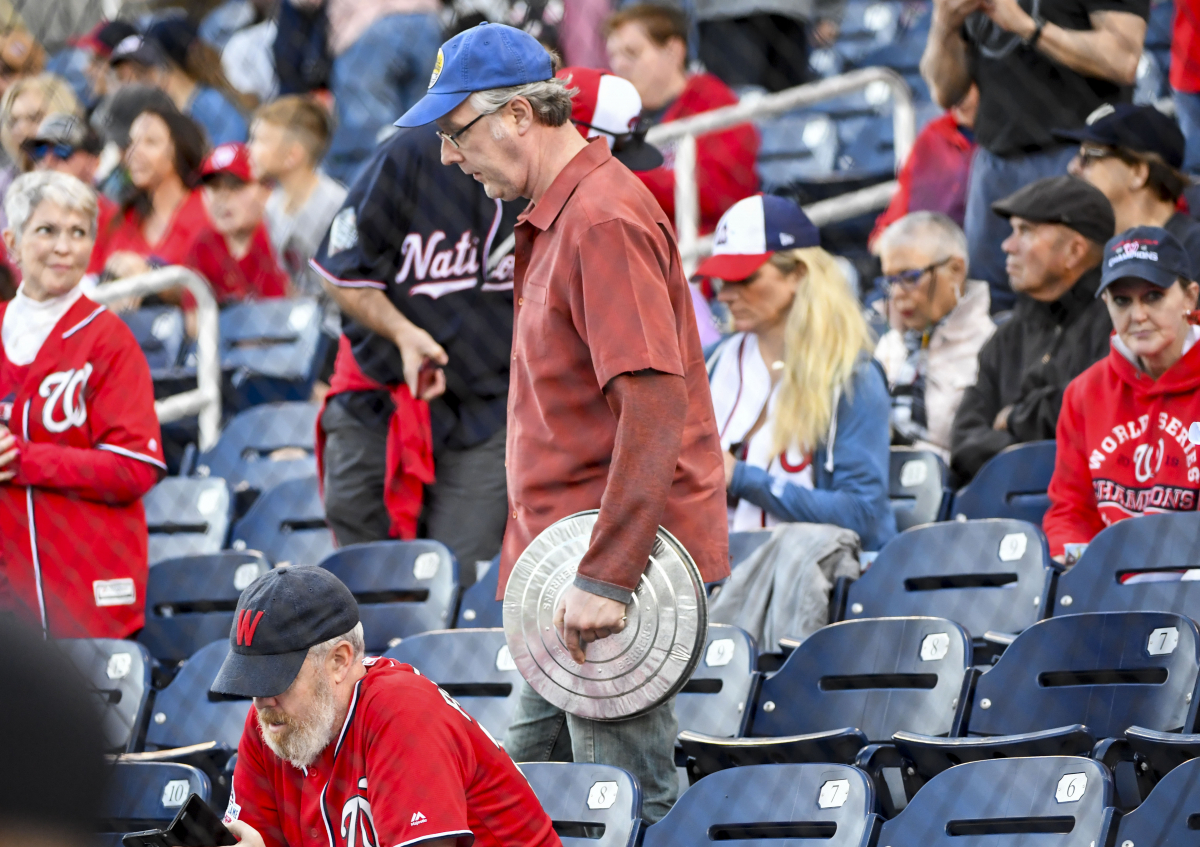 This was Houston's first contest since its illegal sign-stealing scheme was uncovered. It was only a scrimmage, and it only lasted two innings because of weather, but it gave a glimpse of what the Astros will experience this year. They were booed at 5:23 p.m. when introduced as "2019 American League champions." They were booed 20 minutes later. They were booed as a video played to commemorate their AL pennant, booed during player introductions and booed no matter what they did.

"A fastball is coming! It's a fastball!" the fan repeated, over and over, nodding to how the Astros once knew what pitch was coming by gleaning them off in-game video, then banging on trash cans in the dugout to tip off their hitters. "It's a fastball!"

Scherzer pumped in 94-mph heat that Straw watched for strike one.

"What did I tell you, Myles?" the fan continued. "I told you it would be a fastball! You should have swung!"

"I don't know; we won the World Series, so it wasn't like I had a vendetta to hold," Scherzer said after throwing 22 pitches in two innings. "For me, over here, we're just trying to move forward and get ready for our season."

Put the sign-stealing aside, for just a moment, and this spring-opening exhibition had enough layers to it. It was a World Series rematch. It was the first time Dusty Baker, Houston's new manager, was across the field from his former team. There was real action, and real matchups, and a real chance for hopefuls to prove themselves. That meant something.

But back in reality, where this sport resides, it is impossible to ignore the fallout of the scandal. It has been everywhere these past few weeks. It will continue to be everywhere in the coming months. And it was present Saturday evening, in a ballpark the Nationals and Astros share, for a game that was covered as though it counted.

"I'm hoping that, on our side, I can't tell you anything about the Houston Astros or what they are going to do, whatever, but for us we act professional," Nationals Manager Dave Martinez said earlier in the week. "We go about our business and get ready for the season. Go out there and compete, and just get ready to play."

Martinez has deflected all Astros-related questions since spring training began Feb. 13. But by saying he wants Washington to "act professional" and "go about our business," he provided a tiny window into his thinking. A major topic surrounding the Astros is how often and how soon they will face retribution for cheating. Baseball's way of dishing that out is for pitchers to hit batters with very hard fastballs. The Nationals, in theory, were the first team with a shot to act.

Yet it would have been silly for them to do so for a number of reasons: It is February. They beat the Astros for the title in October and can thus take the high road. Baker did not play any of his regulars, meaning Alex Bregman, José Altuve, Carlos Correa and George Springer, the stars who took part in the sign-stealing scheme, will be booed another time.

Their spots were filled by Straw, Jeremy Pena, Taylor Jones, Abraham Toro and so on. And Scherzer used them to condition his 35-year-old body for the season. Scherzer completed his outing as the rain picked up, a white tarp was placed on the field and fans waited like sardines in a packed concourse. The game was canceled after a 93-minute delay. The teams had spent only 29 minutes on the field.

"It was good to get out there, start throwing all my pitches," Scherzer said. "That's all you're looking for, to get out there. I'll get my routine. I've gotten in a five-day rotation here, and off and running."

Last February, in this exact matchup, the biggest story was a new pitch clock that MLB was testing to shorten games. Scherzer paid no attention to it and, after pitching two innings, declared he was "fundamentally against this." But now MLB has much bigger problems.

The Astros are worried about retaliation for past actions. So is the league and the MLB Players Association. Indians pitcher Mike Clevinger has said Astros batters "shouldn't be comfortable" during at-bats. Nick Markakis, an outfielder for the Atlanta Braves, told reporters that "every single guy over there needs a beating." Yet the tricky part will be determining intent.

When Martinez was asked about that gray area - and whether he's worried an honest hit-by-pitch could be construed as retaliation - he sidestepped that question, too. He was interested in how Victor Robles looked in the leadoff spot Saturday, and how Carter Kieboom looked at third base, and whether Scherzer could push through two live innings for the first time since Oct. 30, the night Washington won the World Series. The manager will leave the noise to everyone else.