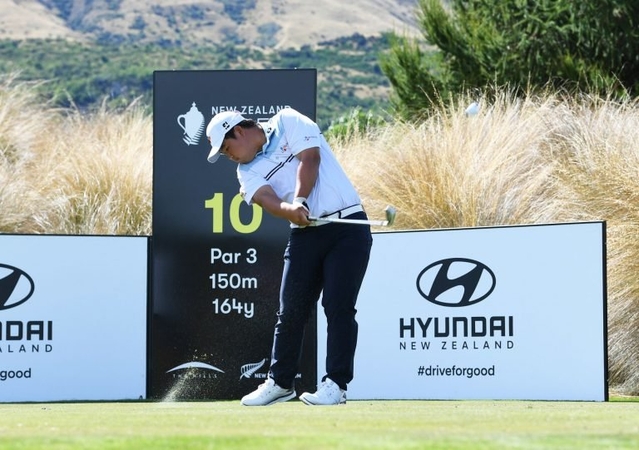 Queenstown - Korean teenage prodigy Joohyung Kim remains the boy to catch as he signed for a four-under-par 68 to take the second round lead at the 101st New Zealand Open presented by Sky Sport on Friday.

Playing at The Hills, the 17-year-old showed why he is fast becoming one of the rising stars from the Asian Tour by continuing to feature prominently on the leaderboard with his two-day total of 11-under-par 132.

Qualifying School graduate Ben Eccles of Australia resumed his whirlwind adventure on the Asian Tour by firing a 68 to trail Kim by one shot in second place while Thailand’s Pavit Tangkamolprasert posted the day’s lowest round with a 64 at The Hills to share third place with Australia’s Lucas Herbert.

Eccles secured his Asian Tour card at Qualifying School in Hua Hin, Thailand last week before receiving a late call up for the tournament, having been on the reserve list.

The Australian opened with a 65 at the Millbrook Resort before his second round 68 put him well on track for his first victory as a professional, having claimed a debut victory in the 2015 NSW Open as an amateur.

Pavit’s game also caught fire as he signed for a bogey-free 64. Having gone five-over in his opening five holes in the first round, the Thai knows his mental strength will be key as he eyes a weekend charge.

The weekend cut was set at even-par.

Simultaneous to the tournament, a Pro-Am competition has also been played with a two-ball-best-ball format this week.

A second cut will then be made in the New Zealand Open Pro-Am Championship after the third round with only the top-10 pro-am teams making it into the fourth round.

I played really well. With the tough conditions, it was not easy. But I managed myself really well and hope I can keep it up at the weekend. I have been working really hard and it is nice the scores have matched the work. I am still not at the top and I am trying to learn every day from the guys who are way more experienced than me. I am very fortunate that the veterans have been very nice to me and tell me how to play golf, how to play my best. My ball striking has been good. On this course if you are not in play, it is really hard to go around. Tomorrow is only the third round to be honest. I am in the halfway lead but there are so many big names just one or two shots away and those guys, when it comes to the intense moments, they always deliver. I just have to bring my A-game, stick to the game plan and play the best I can.

I earned my Asian Tour card last week and we thought we travel anyway, but we got the call on Wednesday morning saying I was in. We were going to have a two-week holiday regardless of what happened so it’s just a bonus to be playing. Yesterday I played awesome, in those conditions as well it just all came together. This morning I got off to a fast start - eagle, birdie, birdie. It awesome, it’s an amazing feeling and hopefully I can keep going. I just wanted to keep enjoying it, that’s been the main thing for me this week. The game still feels pretty strong, particularly the last couple of months. Mentally I’m enjoying it more, I want to be out there playing. The rough is up this year, which is going to make it interesting over the weekend.

I’m very pleased with how I’ve played today especially with my driver as I managed to hit most of the fairways. I love this course as it favours the long hitters like me. I made a lot of putts today too. So overall, I’m very happy. I was five-over after the first five holes yesterday and I told myself I had to forget everything then and try to move on. The weather was so bad yesterday. It was windy, cold and was raining. It was like my win in Sabah last year where I made a strong comeback to win. I just told myself to regain my focus and as long as I can do that, I still have a chance.

Leading scores after round 2 of the New Zealand Open 2020 (am - denotes amateur):