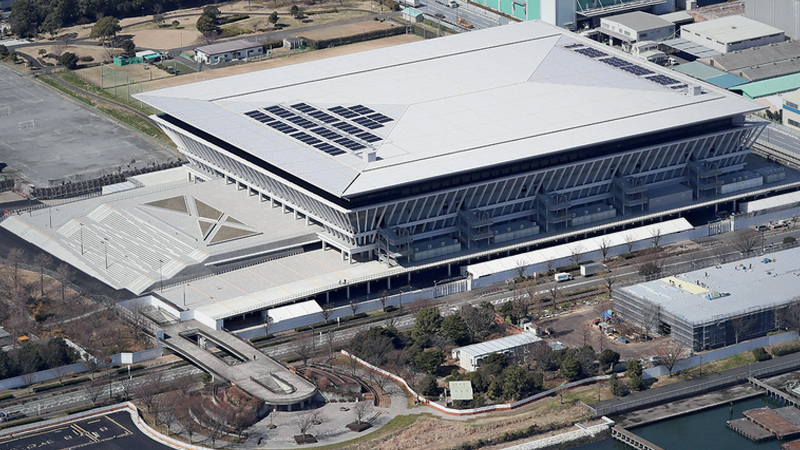 The Tokyo Aquatics Centre is seen from a Yomiuri helicopter on Feb. 28, 2020. MUST CREDIT: Japan News-Yomiuri

Construction for a swimming venue for the Tokyo Olympics and Paralympics called the Tokyo Aquatics Centre has been finished in Koto Ward, Tokyo, bringing all nine new facilities in Tokyo to completion, with a total construction cost of about ¥350 billion. Seven of the facilities are located in the bay area, and were constructed in a way that would prevent ground liquefaction and environmental degradation and took the placement of many nearby condos into consideration.

The Tokyo Aquatics Centre will be used for the diving and artistic swimming events at the Olympics, and the swimming event at both the Olympic and Paralympic Games. The walls and floor of the main swimming pool are movable and its length and depth can be adjusted. Once the events end, the number of seats will be reduced from about 15,000 to about 5,000 to save on maintenance costs.

According to the Tokyo metropolitan government, the facility was built on a reclaimed area that contains a lot of water. A survey conducted prior to construction found that the area could liquefy in the event of an earthquake. For this reason, about 15,000 holes, about 70 centimeters in diameter and about 10 meters deep, were dug into the ground and filled with gravel that will drain well to stabilize the ground.

At the Ariake Arena in Koto Ward, Tokyo, where volleyball games will be held, dealing with the possible environment disruption caused by light shining on nearby high-rise condominiums has become an issue.

If Ariake Arena had been built with a dome-shaped structure, which is common for a sports facility, the sunlight that hit the roof of the facility would have reflected onto the upper floors of the condominiums, causing residents to experience excessive glare. To avoid this problem, the metropolitan government has adopted a structure in which the roof is low in the middle and raised at the ends. Doing so makes it easier for light to gather at the center of the roof, reducing the amount of light reflected.

There are also some facilities that were forced to change their construction plans. The Ariake Gymnastics Centre, in the same ward, was originally scheduled to be demolished after the Games, and was estimated to cost about ¥8.9 billion. However, it turned out that the planned buildings needed to be made more earthquake-resistant, and the construction cost finally amounted to about ¥20.5 billion. The facility will be converted into an exhibition hall for about 10 years after the Games, but there are no plans for the future.