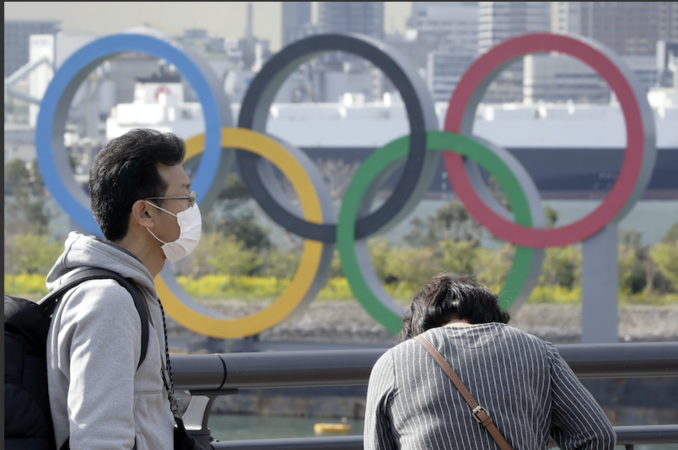 A man wearing a protective mask stands in front of Olympic rings in Tokyo on March 11, 2020. MUST CREDIT: Bloomberg photo by Kiyoshi Ota.

A rising chorus by athletes, the public and even President Donald Trump to delay or cancel the 2020 Tokyo Olympics has paralyzed Japan's politicians and organizers, whose conflicting messages are sowing even more confusion over the fate of the games.

Prime Minister Shinzo Abe has made clear his desire to hold the competition in its "complete form," without reducing its scale or banning spectators, even as the coronavirus pandemic shuts down economies across the globe. Yet just a day before, his deputy called the games "cursed" and the chief of the local organizing committee disclosed that no plans have been made to ensure the safety of competing athletes.

"Japan's leaders are trying to avoid a situation where they will be held accountable," said Kuniyoshi Shirai, a professor of crisis management studies at the Graduate School of Information & Communication. "What they want to do is to be able to say that they followed correct procedures."

The final decision rests with the International Olympic Committee, which said earlier this week that the games will go ahead as planned in an "unprecedented situation." Since then, however, the specter of businesses going bankrupt, borders being closed and people's lives being changed forever has only made it more difficult to hold an opening ceremony on July 24. For many, the angst and parlous communication echoes the stasis that gripped officials when they struggled to come up with confidence-boosting measures to deal with a radiation-leaking nuclear reactor after the massive 2011 Tohoku earthquake.

Thomas Bach, the president of the IOC, told the New York Times on Friday that cancellation wasn't on the agenda and that it was too early to make a decision on postponing the games. "Of course we are considering different scenarios," the newspaper quoted him as saying.

For now, officials are moving forward with the usual pre-games events while taking precautions so that large crowds won't gather and infect each other. Thursday's Olympic torch handover ceremony in Greece, usually a festive affair, was held without spectators. They have taken similar measures for next week's start of the relay in Fukushima, which was chosen because it was the site of the nuclear accident and where the government wants to bring attention to revitalization efforts. Tokyo organizers have asked people who feel ill not to watch from roadsides.

They won't need much encouragement. Earlier this week, 63% of respondents to an Asahi newspaper poll said the Olympics should be postponed, while 9% said the games should be canceled. Only about a quarter said the competition should go ahead.

Sporting events in the U.S., Japan and other countries have been canceled, delayed or held without spectators because of the coronavirus outbreak. Day by day, however, the seriousness of the pandemic is sinking in. The number of deaths in Italy surpassed those in China, with more than 230,000 infected worldwide and 9,800 killed. Markets are gyrating wildly while governments rush to enact stimulus measures.

Conflicting and sometimes tone-deaf communication by Japanese politicians and organizing officials haven't helped. Taro Aso, the finance minister and deputy prime minister, told Parliament Wednesday that these games are cursed: "It's a problem that happens every 40 years." The gaffe-prone politician appeared to be referring to the cancellation of the 1940 Games because of World War Two and the 1980 Moscow boycott. Asked about the risk of the games spreading the illness, it's "a pretty difficult decision," he said.

"What they need is efficient and strategic communication," Shirai said of the messages coming from Japanese officials.

Asked about measures to protect athletes, Toshiro Muto, Tokyo 2020's chief executive officer, said no plans have yet been made. "The situation changes every minute," he said. "Until we know in what circumstances the games will be held, I can't address measures accurately."

All of this has fueled concerns by the stars of the Olympics - the athletes - who have begun to question the safety and preparedness of the event, the biggest stage in sports. Hayley Wickenheiser, an Olympic hockey player and member of the International Olympic Committee said earlier this week that the insistence on going forward with the games was "insensitive and irresponsible." U.K. athletes have called for cancellation, as has the head of Spain's National Olympic committee.

To a certain extent, Japan's politicians and officials are in the same boat as the fans. The decision whether or not to hold the games will be made by the IOC, which has said it will follow the World Health Organization's guidance - and a much higher authority, the Group of Seven economies. And if the Olympics are canceled or postponed, the country may pay a high price. Economists said this week that either scenario would force the economy to shrink for a fourth-straight quarter, the longest stretch since the global financial crisis.

If the Olympic flame ends up being extinguished with no games, the irony of the slogan adopted by top-tier Olympic sponsor Toyota will seem bittersweet indeed: "Start Your Impossible."