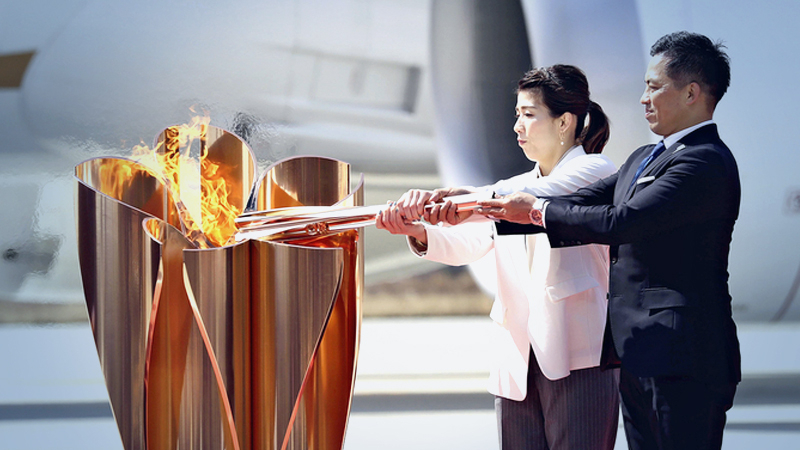 Wrestler Saori Yoshida, left, and judoka Tadahiro Nomura, both three-time Olympic champions, light the torch from the Olympic flame in Higashi-Matsushima, Miyagi Prefecture, on March 20, 2020 after it arrived on a chartered flight from Greece. MUST CREDIT: Japan News-Yomiuri

Postponement of the Tokyo Olympics appeared increasingly inevitable Monday, as a growing number of countries signaled their athletes would not participate if the Games were held as scheduled this summer.

A whirlwind 24-hour period started Sunday with International Olympic Committee President Thomas Bach issuing a letter to Olympic athletes, saying for the first time that the IOC was considering delaying the Summer Games because of the novel coronavirus pandemic. He said canceling the Olympics altogether had been ruled out and said the IOC would consider different scenarios and make a final decision within the next four weeks. 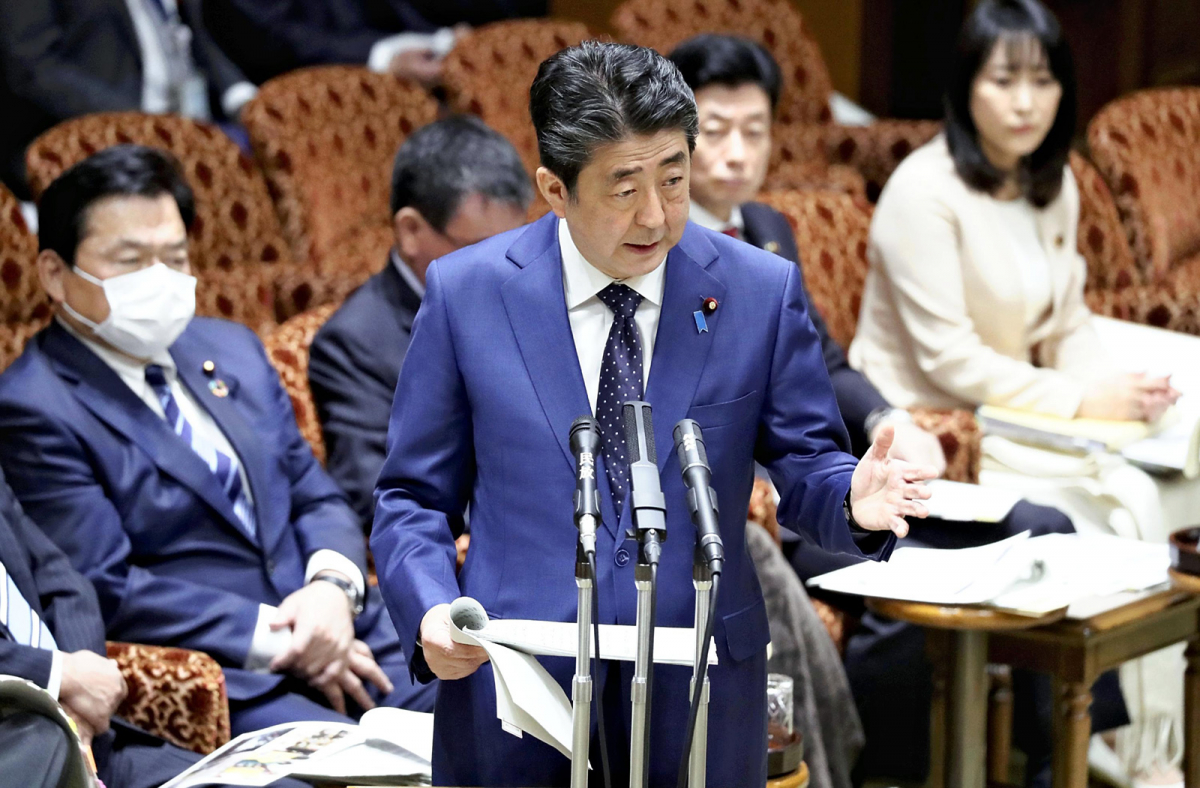 That long timetable led Canada to call for a postponement Sunday night and say it would not send any athletes to Tokyo this summer. Australia and Germany followed with similar announcements Monday, and other countries, such as Brazil, Norway and Slovenia, have either urged a postponement or said conditions must improve if they're to send athletes to Tokyo this summer.

Later Monday, Dick Pound, the longest-serving IOC board member, told USA Today "postponement has been decided," though the IOC gave no indication Monday that a delay was certain. In a request to comment on Pound's assertion, an IOC spokesman said, "It is the right of every IOC Member to interpret the decision of the IOC [executive board] which was announced yesterday."

Pound, who did not return phone messages Monday, is one of 100 IOC members, having joined the committee in 1978 but is not one of the 15 members of the IOC's powerful executive committee, the decision-making body that plays a pivotal role in all important Olympic matters. He did speak to the Canadian Press, striking a less-definitive tone.

"You're looking at a postponement," Pound said. "I think that's out there now.

"We're all reading the tea leaves and so on, but the Japanese themselves are talking about postponing. A lot of National Olympic Committees and countries are calling for a postponement," Pound said.

IOC Executive Board member Nicole Hoevertsz said in an email that the board "discussed and took a decision about" postponement Sunday. She pointed to the portion of IOC's official statement that said the IOC would start discussions about postponement scenarios and was confident those discussions would be completed within four weeks. Postponement of any length has a variety of ramifcations, internationally on various sports calendars and locally on the availability of various venues and facilities in Tokyo, with a full year's delay preferable for some constituents and a shorter duration for others.

On Monday, Japanese authorities acknowledged for the first time that postponement was a real possibility.

"What we are going to do before anything else is to start by simulating about whether we postpone one month, three months, five months, one year," said Yoshiro Mori, president of the Tokyo 2020 Organizing Committee. "We need to make a simulation about the various scenarios."

Japan had insisted until now that the Games must go ahead, although Prime Minister Shinzo Abe said last week the priority must be to hold the Olympics in a "complete manner."

On Monday, he told parliament this might mean the dates would have to change.

"If that is difficult, we would have no choice but to decide to postpone, with athletes as the first priority," Abe said, underlining that an outright cancellation is not an option.

Olympics Minister Seiko Hashimoto said she was "glad to hear" that the IOC did not believe cancellation is an option.

Mori said the IOC and Japan would like to "closely examine" the various scenarios open to them over the next four weeks, adding that they would not start with the assumption the Games would definitely have to be postponed but couldn't avoid discussing that possibility.

For each scenario, organizers would have to work out whether they could still secure the Olympic venues for all 33 sports, as well as for the Paralympics, and what the costs would be.

"We have to go through each of them one by one," Mori said. "Considering just these things alone would take an enormous time."

Mori hinted that organizers would prefer to keep the Olympics within this calendar year when he said: "We are 2020, so that is the direction for now."

But Mori and Tokyo 2020 CEO Toshiro Muto stressed that the cancellation was not in the cards, and they were happy to have heard the same message from the IOC.

"Probably, the IOC was thinking that cancellation would not be desirable for athletes and all the stakeholders," Muto said. "And this is what we have been saying all along. We totally agree with that."

Japan's official budget for the Games is around $12.6 billion, but some estimates suggest the total cost could be twice that amount.

Germany became the latest country on Monday to announce that it would not send athletes to Tokyo this summer. Alfons Hörmann, head of German's Olympic committee, made the determination Monday, said Michael Schirp, a spokesman for the German team.

Schrip said about 200 German athletes participated in teleconference Saturday evening with the country's top Olympic officials to voice their concerns. They were given a survey to complete, gauging their willingness to compete this summer. Their feelings were supposed to guide the German response, Schrip said, but after the IOC said Sunday it could take another four weeks before a decision on postponing the Tokyo Games is made, Hörmann decided he had to act sooner.

Hörmann has indicated to the IOC that he hopes a new date in 2021 could be identified and intends to send a more formal notice to Bach after the athletes have all submitted their surveys later this week.

Postponement would be an enormously complicated undertaking, involving serious residual effects on the global sporting calendar and forcing broadcasters to renegotiate with advertisers.

There are also doubts about the availability of some venues, including the Olympic Village, where hundreds of apartments have been sold by a consortium of real estate developers for occupancy after the Games, as well as the need to secure the planned media headquarters at the Tokyo Big Sight, a tightly booked conference center.

For now, organizers say they will push ahead with the torch relay, which is due to start on Thursday in Fukushima in northeastern Japan and is meant to symbolize Japan's recovery from a 2011 tsunami and nuclear accident in the area. Mori said the prime minister was unsure if he would attend the start of the relay, as the government wanted to discourage crowds forming, although Mori said he himself would attend.

Mori acknowledged the relay route may need to be modified and said organizers were studying how it should be held given the fast-changing situation with the virus.

Tens of thousands of people flocked to a stadium in Sendai north of Tokyo to see the Olympic flame burning in a cauldron over the weekend after it arrived from Greece.

"We had a turnout nearly 10 times that we had estimated," Muto said.

Muto said organizers should be happy with the turnout "in and of itself" but had placed risk as their top priority and has changed arrangements so people simply passed by the flame without a crowd forming.