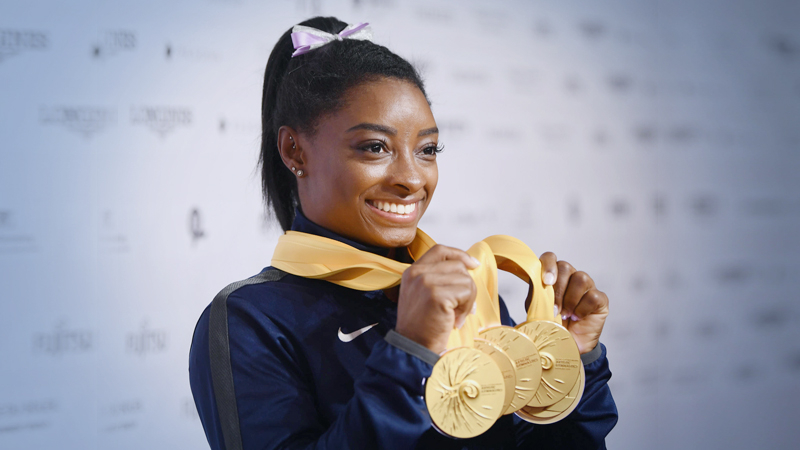 Olympic champion Simone Biles, the world's most dominant gymnast, wept when she learned that the 2020 Tokyo Games would be postponed.

But as Biles explained in an interview on Wednesday's "Today" show, her first public comments about the one-year delay, she quickly realized the decision was correct. And with a broad smile, she expressed every confidence that she'll be in shape and ready to compete when the Games open on July 23, 2021.

"I got a text [that the Games were being postponed}, and I didn't really know what to feel," Biles told hosts Hoda Kotb and Savannah Guthrie via a Skype interview. "I cried. But ultimately it was the right decision. We need to make sure that everyone in the U.S. and around the world is healthy and safe."

At 4-feet-8, Biles is the biggest name among the roughly 11,000 Olympics scheduled to compete in Tokyo -- a five-time Olympic medalist and five-time world all-around champion who has claimed an unprecedented 30 Olympic and world medals.

The one-year postponement will have a unique impact on female gymnasts, whose competitive life span is brief.

With rare exception, obsolescence comes early in sports in which prepubescent bodies have an advantage. Gymnastics' relentless pounding on bones and joints exacts a harsh, painful toll. Young women's center of gravity shifts with puberty. And the most experienced, graceful gymnasts ultimately get crowded out by the next generation of fearless, seemingly weightless teens.

Biles is that exception, the rare female gymnast who has not only maintained her form for two Olympic cycles but has raised the level of difficulty of her skills.

Because Biles hadn't publicly commented on the International Olympic Committee's one-year postponement until Wednesday, her level of commitment to sticking with the sport for another year was an open question. She recently turned 23 and will be 24 when the 2021 Tokyo Games are held.

But she left no doubt Wednesday, flashing her signature smile throughout the interview as she spoke about how she has been spending the time away from the gym at her home in Spring, Texas.

Biles said she is staying in touch with her coaches, Laurent and Cecile Landi, via text and FaceTime, to discuss her at-home workouts and develop a training plan that will prepare her anew once they can return to training in the gym.

As for her self-supervised workouts, they include exercises to maintain her strength in her arms, legs and core muscles; extra dog-walking; and a twerked-style aerobic workout.

Biles likened what she now faces to the year-and-a-half break she took from competition following the 2016 Rio Games, a stretch in which she competed on "Dancing with the Stars." With her coaches' help, she had no troubling regaining her form for her return to competition in 2018.

"I have no doubt my coaches will get me back in shape," Biles said.

But she noted the mental challenge of sustaining the necessary focus and commitment would be as difficult as the physical.

"That's what's going to take the toll on us," Biles said. "We have to stay in shape mentally as well as physically. You have to listen to your body as well as your mind."

Biles has joined other Olympic and pro athletes in donating memorabilia to Athletes for covid-19 relief. In her case, she contributed an autographed leotard.

"In a crisis like this, I feel like everybody wants to jump up to their feet and help," Biles said. "I'm glad I did it."

Like many Americans, adhering to social-distancing distancing guidelines to limit the spread of the virus has meant that Biles hasn't seen her mother in two weeks. That's unusual for her close-knit family, she said. But her mother, Nellie Biles, is maintaining the family's Sunday dinner tradition by preparing meals for her children via curbside pickup.