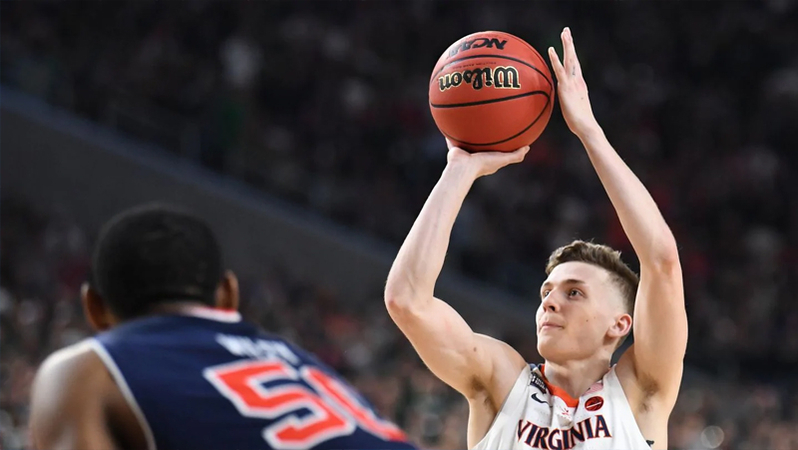 One year after the most memorable weekend of his basketball career, former Virginia star Kyle Guy is dealing with a family tragedy, revealing his grandfather died Friday of the novel coronavirus.

Guy posted the news, along with images of his grandparents, to his Twitter page Saturday afternoon.

"Covid-19 took my grandpa last night," Guy wrote, referencing the disease caused by the coronavirus. "Mortality is a tough pill to swallow. You used to live down the street, now you're with us everyday. I beg you, don't let this be your wake up call. Take this seriously & stay safe."

The death of Guy's grandfather came on what would have been the eve of this year's Final Four. Last season, Guy was selected the most outstanding player in the Final Four after the Cavaliers won the first national championship in program history.

Then a junior, Guy sparked the top-seeded Cavaliers (35-3) with 24 points in the national championship game, an 85-77 overtime win against No. 3 seed Texas Tech in Minneapolis. He made 8 of 15 field goal attempts, including 4 of 9 from three-point range, and added three rebounds and a steal.

In the national semifinals against No. 5 seed Auburn, Guy scored 15 points, none more important than three free throws with sixth-tenths of a second remaining, and Virginia rallied for a 63-62 win. He also made a 3-pointer with 7.4 seconds to play that cut Virginia's deficit to one point.

Several weeks later, Guy announced on social media he was declaring for the NBA draft, where the Sacramento Kings selected him in the second round with the 55th overall pick.

"When I was 7 or 8 my grandpa had me sign a piece of paper saying he'd be my manager (jokingly) if I ever made it to the NBA," Guy wrote Saturday in an Instagram post. "Something as small as that was always on my mind while I tried to make that dream come true. I know he's up there waiting for his cut . . . and one day, I'll give it to him."

Guy played in two January games before the NBA suspended its season March 11 because of the coronavirus pandemic.

In his Instragram post, Guy said of the pandemic: "I urge and beg you all to take this seriously." As of Saturday evening, there have been more than 300,000 confirmed cases and 8,000 deaths from the coronavirus in the United States.

Guy was one of three players on the Cavaliers last season to leave early, joining point guard Ty Jerome and swingman De'Andre Hunter, who was the fourth overall pick by the Atlanta Hawks.