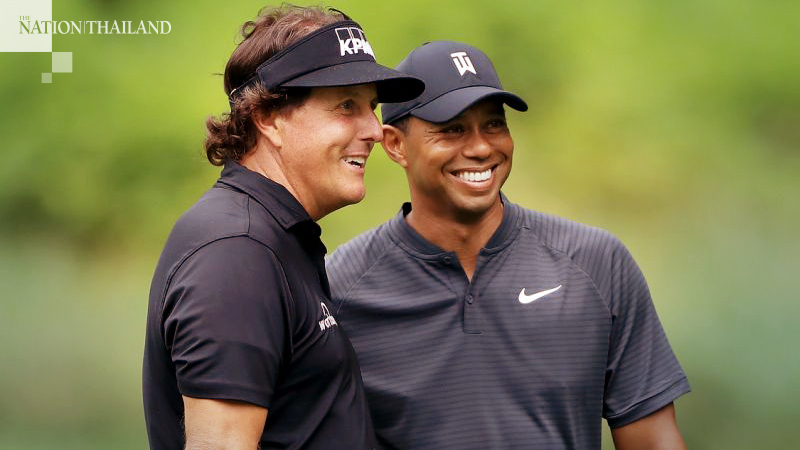 Tiger, Phil . . . plus Brady and Manning? An announced charity golf match might lack some drama if it follows in the footsteps of its 2018 predecessor, but it certainly won't suffer from a shortage of star power.

The upcoming event already has a major edge in potential interest over "The Match," a pay-per-view offering in November 2018 in which Phil Mickelson defeated Tiger Woods head to head for a winner-take-all pot of $9 million. This time, the pair will be joined by two NFL superstars who have had a similarly friendly rivalry.

The addition of Tom Brady, who recently left the New England Patriots after 20 seasons to join the Tampa Bay Buccaneers, and Peyton Manning, who retired in 2016, could draw in an even wider audience. That in turn would boost the amount that goes to novel coronavirus-related relief efforts set to be the match's beneficiaries.

Apart from the parties involved and the designated cause, details were scant in the announcement released Wednesday via Bleacher Report. That platform is owned by Turner Sports, which confirmed it will air the match live on TNT next month.

A spokesman for Turner Sports offered no further comment other than to refer back to the announcement, which stated that details about the date of "The Match: Champions for Charity," its venue and its specific charities will be revealed in the coming weeks.

"Tournament organizers are currently working with state and local government and public health officials on competition and production logistics to ensure the event follows safety and health protocols," the announcement stated.

"The Match," which was held at Shadow Creek in Las Vegas, was widely panned for featuring sloppy golf, less banter and wagering than expected and an anticlimactic finish. Mickelson took the one-one-one showdown with Woods after it went to four playoff holes as darkness set in.

"You know, America, you're watching some really crappy golf," TNT analyst Charles Barkley said on the telecast at the time.

With Brady and Manning joining the event, it becomes a two-on-two match. The teams have yet to be announced, but the Action Network reported that Woods and Manning, who are both Nike endorsers, probably will partner up against Mickelson and Brady.

The PGA Tour, which called off March's Players Championship after one round and canceled subsequent events, said last week that it plans to return in June without fans in attendance but with a rejiggered schedule that includes the PGA Championship, the U.S. Open, the Masters and the Ryder Cup.

ESPN reported Wednesday that people with knowledge of the event indicated the match probably will take place in Florida around Memorial Day weekend. Florida Gov. Ron DeSantis, a Republican, has been pushing to reopen his state's economy, and he recently designated the WWE as an essential business, which exempted it from the state's shelter-in-place order.

"If NASCAR does a race and can televise it, without large crowds, I think that's a good thing," DeSantis said last week (via golf.com). "I'd like to see Woods and Mickelson do the golf or whatever because that's social distance."