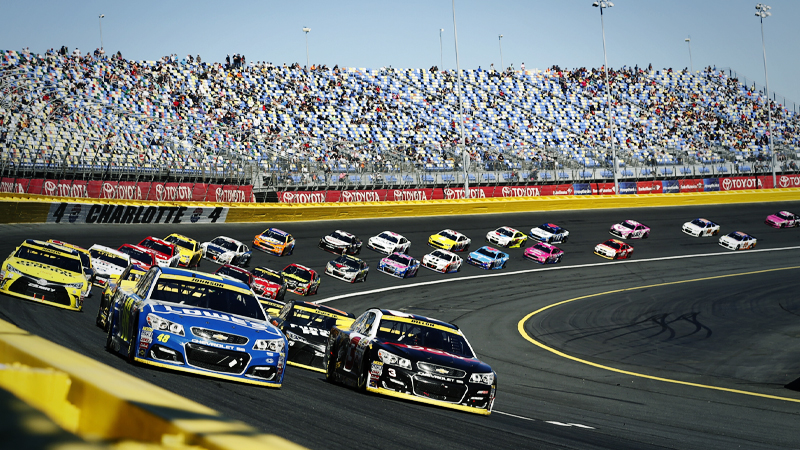 Stock-car racing has always rewarded competitors who push themselves and their cars to the very limit - but not beyond. And with 40 cars racing at nearly 200 mph, nose-to-tail and door-to-door, everyone in the sport lives with the knowledge that one wrong move can have serious, sometimes tragic, consequences.

On Sunday, when NASCAR returns to competition without fans in the grandstands at South Carolina's Darlington Raceway, the best-case scenario is that it captivates a homebound audience that is starved for live sports programming after nearly three months of quarantine because of the novel coronavirus.

The worst-case scenario is that, in becoming the first major U.S. sport to restart, with a vaccine nowhere on the horizon, NASCAR finds that its safety precautions for participants fall short, triggering an outbreak among drivers and essential personnel that jeopardizes lives and sets back the timetable for all sports' return.

After consulting the Centers for Disease Control and federal, state and local health officials, NASCAR is mandating numerous measures to avoid the latter, including barring fans for the foreseeable future. By all accounts, everyone involved in NASCAR's return, from right-rear tire-changers to front-running stars, is on board with the restrictions.

NASCAR President Steve Phelps said that it wasn't NASCAR's primary goal to be the first major sport to return to competition as the country gradually reopens for business. But after consulting with experts, he concluded that stock-car racing could do so safely with proper safeguards.

"It was more about, 'Do we have the plan in place that is going to keep our competitors and those associated with running the race safe?'" Phelps said in a telephone interview. "We would not put the safety of those that will be at the racetrack, in the footprint of Darlington, at risk."

All eyes will be on the sport, including those of other pro leagues expected to have representatives on site to observe NASCAR's safety protocols as they plot their own re-openings.

"We all understand the importance of what we're doing," said Greg Zipadelli, competition director at Stewart-Haas Racing, in an email exchange. "It's about our health and the health of those around us. It's also about doing this right, so that our industry can be a benchmark for how other sports can return to action."

The incentive to resume competition varies by sport, as do the challenges of putting athletes back on the field of play.

Sports that derive the bulk of their revenue from broadcast deals, such as the NFL, have huge incentive to restart with or without fans.

There is less urgency to compete in empty venues for sports that rely more on gate-receipts and on-site sponsorships, such as tennis.

Ticket sales accounted for the bulk of NASCAR's revenue in its boom years, 1995-2005, when souvenir-buying throngs of 180,000 packed speedways in Daytona, Fort Worth and even Bristol, Tenn.

The script flipped, however, as race-day attendance plunged. Today, NASCAR's national broadcast deals drive the sport's revenue, and all stakeholders benefit under a revenue-sharing plan that steers roughly 65 percent to race teams, 25 percent to track owners and 10 percent to NASCAR. That's reason enough to fire up engines for Sunday's Fox broadcast.

It's also easier for NASCAR to be a coronavirus guinea pig than contact sports such as the NFL and NBA, in which sweat and spit fly. Among the broad-strokes precautions NASCAR is taking:

- Restricting the 40 Cup series teams to 16 people at the track, including the driver and crew chief - roughly one-third the typical contingent of a top-funded team.

- Checking participants' temperatures entering the garage and requiring all to wear masks and gloves and maintain social distance, enforced by potential fines of $10,000 to $50,00 or possible ejection.

- Staging its next seven Cup races, through June 10, at tracks within driving distance of most teams' Charlotte-area headquarters, to prevent participants from having to board flights. Moreover, because the standard race weekend is being compressed into a single day, forgoing the customary practice and qualifying sessions in the run-up, no one needs to stay in hotels.

As Phelps notes, social distancing and protective gear are fundamental to motorsports.

"We've got some advantages in that most of our competitors are already wearing protective clothing and gear - helmets, head socks, fire suits, gloves and the like," Phelps said.

Golf shares the inherent benefit of a natural distancing among competitors, and that's partly why the PGA is planning to resume June 11 in Fort Worth. PGA Commissioner Jay Monahan is among the sports executives who has been in touch with NASCAR about its protocol for resuming competition.

To ensure proper spacing, some teams divided the employees who build racecars near year-round into day and night shifts. Other teams, such as Hendrick Motorsports, staggered shifts not by hours but by stretches of days to provide more continuity in the work flow.

But many team employees, including five-time Cup champion crew chief Chad Knaus, worked from home, via computer. In a Zoom call with reporters last week, Knaus said he saw his No. 24 pit crew Thursday for the first time since NASCAR ran its last race, March 8 in Phoenix, watching from inside his car as the team practiced the furious ballet of 20-second pit stops.

As for the No. 24 Camaro that William Byron will race Sunday, Knaus has yet to lay eyes on it - shocking for any crew chief and particularly one as detail-oriented as he.

"I haven't seen the racecar at all," Knaus said, smiling into the Zoom chat. "Nope, haven't seen it or touched it. Nothing."

As race teams readied cars for the season's resumption, many drivers stoked their competitive fire by racing online.

The wisest among them also found ways to maintain cardiovascular fitness, given the sustained G forces and sweltering heat that await in four hours of white-knuckle racing at Darlington.

Sunday's 400-miler will be the first of four NASCAR Cup races in 11 days - two at Darlington, followed by two at Charlotte Motor Speedway. That's a frenzied clip, but it's the best and safest way, in NASCAR's view, to start making up some of the 10 races missed during the hiatus and delivering its promised 36-race schedule to fans, sponsors and broadcasters.

For the foreseeable future, NASCAR will race without spectators, and the media contingent has been slashed.

Fox Sports, which broadcasts the first half of the Cup season, is allowed only a bare-bones staff in Darlington: an on-site director, a fraction of the manned cameras they customarily deploy and only one pit reporter, former NASCAR driver Regan Smith, instead of the usual four.

Veteran Fox announcer Mike Joy will call the race, along with four-time NASCAR champion Jeff Gordon, remotely from the Fox studios in Charlotte, where they'll sit, appropriately spaced, and follow the action via an 85-inch, panoramic screens that enable them to see the full 1.366-mile, egg-shaped oval.

Just four reporters will be allowed in the press box overlooking the track, barred from face-to-face interaction with drivers and crews.

The roughly 640 participants (40 race teams' 16-member contingents) are being required to record their interactions and whereabouts in case they develop coronavirus symptoms and contact-tracing is required.

But under NASCAR's safety protocols, neither drivers nor crew members will be tested for the virus, as contact sports likely will require. In a teleconference with reporters this week, 2014 NASCAR Cup series champion Kevin Harvick said he believes testing NASCAR competitors isn't necessary.

"I'm not gonna get punched in the face by anybody else or be put in a head lock or be directly in contact with any of my other competitors, so I think it's a drastically different situation," said Harvick, who in addition to driving the No. 4 Ford Mustang owns a sports management company that represents other pro athletes, including golfer Vaughn Taylor and UFC fighter Donald "Cowboy" Cerrone. "When you look at the guidelines of entry and exit and temperature checks during the week, and all the logs and things of where people are and who they have interaction with, I think we have done what we need to do from what fits our sport the best."

That said, all Cup drivers will be required to stay in their infield motor homes until it's time to climb in their racecars.

The best-funded teams, such as Hendrick Motorsports No. 24 Chevy, also have arranged for an entire second-string of crew members and relief driver to be medically vetted by NASCAR and within easy range of Darlington in case a key participant gets sick.

And when Sunday's checked flag flies, there won't be any high-fives or group hugs in Victory Lane, per NASCAR's safety rules. Like virtually everything in this time of pandemic, even celebrating will be solitary.

While the decision to restart the season at Darlington Raceway makes sense geographically and politically - the track is two hours from Charlotte, and South Carolina Gov. Henry McMaster is an avid NASCAR booster - it's arguably the most technically difficult, demanding track on the circuit because of its egg-shaped layout and decades-old imperfections.

"Darlington is one of the toughest tracks on the schedule because of the edge you have to push the car to," said Gordon, who won seven Darlington Cup races before retiring in 2016, in a telephone interview. "You're inches away from the wall, the grip starts out high but falls off really, really fast because of the tire wear. There are some bumps that are pretty severe off of Turn 2. And both ends of the track are different."

That challenge will be vastly compounded Sunday, when drivers strap in racecars they have never driven, denied even a single practice lap, after a 10-week hiatus from competition on what's expected to be a sweltering afternoon.

Without benefit of practice, the engineers and mechanics can only guess at the ideal setup of springs and shocks. Mindful of the chaos that may ensue, NASCAR has scheduled a caution flag on Lap 30, so drivers can duck into the pits for adjustments.

Given the high stakes and myriad variables, Zipadelli, the Stewart-Haas competition director, hopes drivers will show restraint - at least at the outset.

"First of all, it's Darlington," Zipadelli noted. "There are more cars that have smacked their right sides at Darlington than anyplace else we race. It's a treacherous, intense, high-speed place. I expect the majority of people will try not to step over that edge in that first run, and then make their adjustments accordingly."

Four decades ago, on the eve of NASCAR's first live, flag-to-flag TV broadcast, the 1979 Daytona 500, a blizzard hammered the East Coast, leaving millions of snowbound Americans eager for the diversion of stock-car racing and minting new fans in the process. Sunday's race could have similar television-audience potential. With even higher stakes off the track, the rest of the U.S. sports world certainly will be paying attention.

"Obviously, our competitors and our crew guys and everybody who is at the racetrack needs to remind themselves when they leave their house [Sunday morning] that the world is watching - and our country, especially, is watching," Harvick said. "We need to make sure that we make all the right moves."