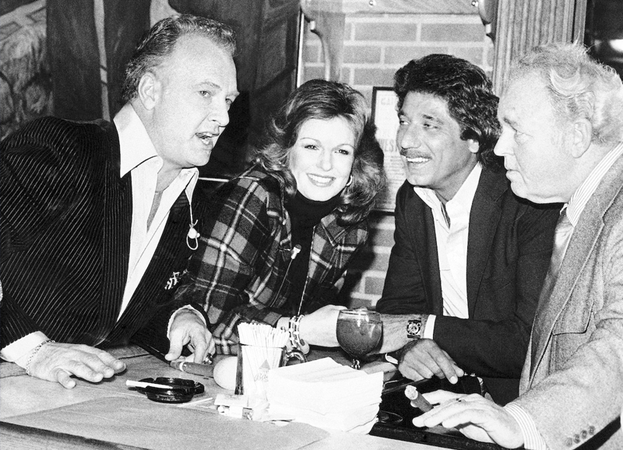 Someone had to do it.

For decades, women were barely represented in sports journalism. In the 1970s, as that and so much more began to change, Phyllis George's moment arrived. A former Miss America, she became a fixture on "The NFL Today" on CBS, providing a strong yet folksy charm that fit the times as the NFL began to take over as the national pastime.

As ESPN's Hannah Storm put it, "someone has to go first" and, in 1975, that was George, who joined Brent Musburger and Irv Cross (and, later, Jimmy "The Greek" Snyder) on "The NFL Today." She was a "true pioneer who approached her job with enthusiasm, empathy and humour," Storm tweeted. "She was herself-charming and funny ... helped her audiences connect with some of the great sports figures of the day."

George, whose family said she died Thursday at age 70 in a Lexington, Kentucky, hospital of a blood disorder, made people comfortable with the idea of a woman's voice on sports broadcasts, and hiring her "changed the face of sports television," Neal Pilson, a former president of CBS Sports, told the Associated Press.

President Donald Trump praised George on Sunday morning, calling her "a great person and a true pioneer for women in television." Pilson said it was "her openness and enthusiasm that made her a valuable contributor."

"She didn't claim to know a tremendous amount about sports, but she knew about people, which is why her interviews resonated," he added. "She could do the best interviews with athletes and family members. She was a warm person, and that came through on the set and in the interviews."

From there, others could take her role and make it their own. It was enough to be in the broadcast seat; as Billie Jean King tweeted, "Visibility matters." Sean McManus, chairman of CBS Sports, called her "an icon in the sports broadcasting industry."

CBS Sports was a fixture when she was hired, but, as Storm said, it was a different time.

"People were uncomfortable with the idea of seeing a woman on TV talking about sports in a prominent role," Storm said, according to the AP. "But someone has to go first. I give her so much respect for truly her courage. She had to put herself out there. Phyllis George did something out of the norm. And I'm forever grateful for her leading the way."

Even if she didn't break down game tape, she did something more important for the profession and for what sports would become: She put a face on players and showed that entertainment was a big part of athleticism. She coaxed a revealing personal nugget from Roger Staubach, getting the Dallas Cowboys Hall of Famer to say he enjoyed sex as much as rival Joe Namath, "only I do it with one girl."

Musburger tweeted that George, a Denton, Texas, native who also was the first lady of Kentucky during a marriage that ended in 1998, "didn't receive nearly enough credit for opening the sports broadcasting door for the dozens of talented women who took her lead and soared. Folks - men and women - were comfortable with Phyllis talking about their favorite sport. And in New York, Philadelphia and Washington, they loved her despite her Dallas Cowboys bias! RIP Phyllis. Irv Cross and I will miss you dearly."

In 2017, ESPN's Beth Mowins became the first woman to call a regular season NFL game in 30 years, and she told TheFootballGirl.com (via ESPN) that it mattered when she turned on a TV and "there was a woman talking about football. That's what I was drawn to. I like sports and like to talk, so the two blended together perfectly."

George spent three seasons on the show, then returned from 1980 to 1983. She also covered horse racing, hosted the entertainment show "People" and co-anchored "CBS Morning News."

For countless women in sports journalism today, it did.

"When you're the first, you're a pioneer," George told USA Today in 1999. "I felt they didn't know who Phyllis George was. They played me up as a former Miss America, a sex symbol. I can't help how I look, but below the surface, I was a hard-working woman. If I hadn't made that work, women eventually would have come into sportscasting, but it would have taken them longer."