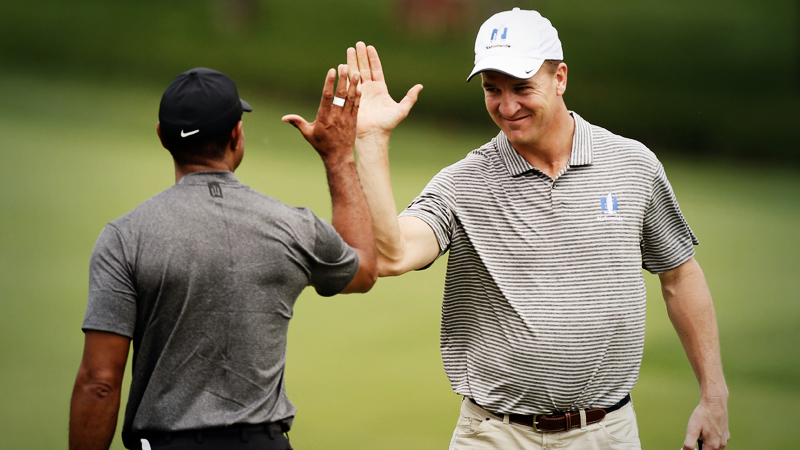 On a rainy day that featured a downpour, entertaining golf and a deluge of trash talk from Charles Barkley among others, Tiger Woods and Peyton Manning held off Phil Mickelson and Tom Brady in The Match II: Champions for Charity, a made-for-TV match-play event to raise money for novel coronavirus relief.

With daylight fading at Medalist Golf Club in Hobe Sound, Florida, the golfers went into what Manning compared to "a two-minute drill," with Woods and Manning holding off Mickelson and Brady over the last four holes to win 1 up on Woods' home course.

After struggling on the front nine to fall 3 down, Mickelson and Brady made it "tasty," to use one of Mickelson's favorite descriptors, on the back nine, starting on the 13th hole when Manning missed a putt in the rain. Mickelson and Brady were rolling, and the pressure was on. Players wore live mics and talked with one another as well as the Turner Sports crew, including Barkley, adding a fresh wrinkle to the sport.

Fading light was just one of the tricky conditions they dealt with; rain fell in buckets starting on the 12th hole, when Brady cracked, "When's the heavy stuff going to come down?" a variation of the classic line from "Caddyshack." At least at that point of the 18-hole competition he could laugh. For most of the front nine, Brady found nothing but frustration and, at times, ridicule from Barkley and others.

But on the back nine, where play changed from best ball to a modified alternate-shot format (all four players teed off on each hole before playing alternate shot after that), things changed and Mickelson and Brady got their footing. Mickelson hit one of the "high, nasty, sweet bombs" he loves. On 11, he crowed: "That is salty! This is where it changes, because that's how I roll." And when Brady made the putt: " 'Cause that's how we roll!"

And so they did, despite coming up short in the end. The name of the game, in one of the first live sports events since the onset of the pandemic, was entertainment and fundraising, and The Match II delivered.

Highlights you may have missed

For the most part, this was the Peyton and Chuck show, with Manning and Barkley yapping away. Woods and Mickelson threw in the occasional dig, with Brady, well, struggling. (You know you're in a bad spot when Barkley is ripping your golf game.)

- A Phil-ly special? As Mickelson and Brady narrowed the lead on the 11th hole, Nick Foles, now the Chicago Bears quarterback, tweeted:

- A late rally? It took Barkley and Brooks Koepka to fire up Brady, finally, with a birdie from the fairway on the seventh hole. Koepka had offered $100,000 if he made par on the front nine; Barkley had chirped and, when Brady's ball went in, he chirped back, "Take a suck on that, Chuck." And Koepka stepped up his game.

Not to be outdone, Woods nearly eagled the hole, but his long putt lipped out. "I willed that one out," Brady cracked.

He was so excited he split his pants from "the torque" in his swing.

- Welcome to the NFC South, Brady. New Orleans Saints Coach Sean Payton seemed to like what he was seeing from Brady, whom he will face twice this season.

And when Brady failed?

"I should have said, if you can just keep it on the planet."

- Woods skewers Brady. The players wore mics, which meant that the trash talk was out on the curb for all to hear. Woods deftly fileted Brady after a shot on the par-5 third hole, "That'll be in the fairway - over on 7."

Brady wasn't having a good day, which J.J. Watt helpfully pointed out. "Tom has to be a couple seconds away from a club toss here..."

- Brain surgeon not needed. At one point, Mickelson explained something to Brady and compared it to a swing pass to a running back. That prompted Barkley to remark, "Phil . . . Everybody who has an annoying friend who's really, really smart and you ask him something simple and he gives you the brain surgery answer."

- A Belichick dig. In a pre-match interview off the tee box, Manning was asked whom he would pick to be Brady's caddie (the players played sans caddie). "It's hard to get to him," Manning admitted. "Do you bring Eli [Manning, who beat Brady twice in Super Bowls]? Could do that. Do you bring Nick Foles [who also beat Brady in a Super Bowl]? Maybe.

"I was thinking maybe [Brady's former coach Bill] Belichick. Bill Belichick caddying for me, just to see how that would have worked. It probably wouldn't have been wouldn't have been good for me, either, because Bill brings out bad things for me as well."