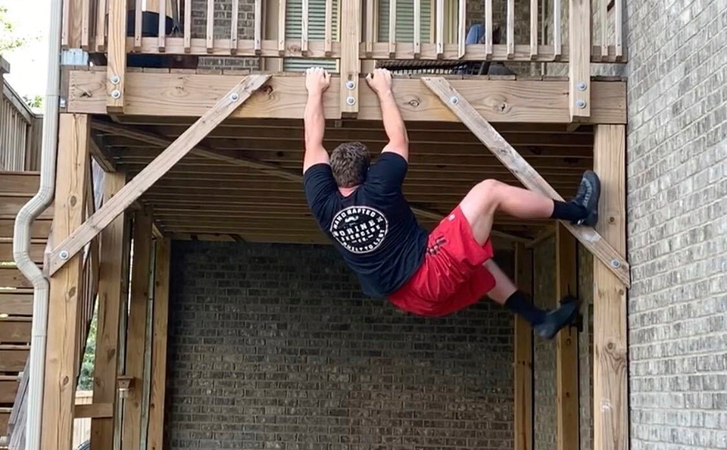 Wes Schweitzer, a new Redskins guard, has one of the NFL's most creative workout programs, and it made him one of the league's best-prepared players for training during quarantine. MUST CREDIT: Photo courtesy of Wes Schweitzer.

In April, Wes Schweitzer decided to scale his backyard deck like a bear. The 6-foot-4, 325-pound Washington Redskins guard planted his feet at the base of one post and grabbed it with his arms fully extended. He began to shimmy up, up, up, focusing on the placement of his feet and hands, in a climb that embodied his offseason.

Of all the creative workout routines taken on by football players during the novel coronavirus pandemic, none stand out quite like Schweitzer's - beyond climbing, the regimen also includes hand-standing, dog-racing and break dancing.

"If you say [my workouts] to someone, they'll say, 'That's ridiculous,'" Schweitzer said. "Then they'll try it, and they'll realize it's really hard."

The unorthodox approach, which Schweitzer adopted three years ago and expanded while confined to his home during the pandemic, was recommended by a former teammate and orchestrated by Austin Einhorn, a Northern California movement guru who studies animals for inspiration and quotes the likes of Albert Einstein.

The program doesn't require big weight plates or machines, so Schweitzer was one of the NFL's best-prepared players to work out during the shutdown, which has forced professional athletes to confront the type of mundane logistical challenges they're accustomed to avoiding. NFL players will eventually return to the field after a longer-than-normal absence from football activities, making their at-home efforts to stay in shape - and perhaps lower risk of injury - essential.

Schweitzer's teammates have found different ways to navigate the challenge. Many players have cranked out push-ups and situps at home - "jail-body workouts," joked safety Sean Davis - while others built out home gyms. Some innovated, including lineman Paul Adams, who helped construct a weight room with felled trees. Edge rusher Ryan Kerrigan replaced a weighted sled by pushing his car, which he claimed was "not that bad" and more of a distance challenge.

Landon Collins, who is training with fellow safety Deshazor Everett and other defensive backs at a facility in Louisiana, noted that players monitor one another's workouts. The subtext: Don't let your fitness level slip.

"Most of us post what we do on Instagram," Collins said, "so I know what everybody is doing."

On Schweitzer's Instagram profile, there's a video titled "Home Movement." He crawls, hangs, contorts, no-hand headstands and pistol squats. He clean-and-presses a large stone. He break dances the windmill. Sometimes, when playing fetch with his dogs, he'll race them to see if he can get to the tennis ball first. From his knees, he folds himself backward like the top of an omelet, and later, when he dead lifts his wife, Shelby, he writes, "Weight confidential," with an emoji wink.

In sum, Schweitzer's simple goal: Move better. He began focusing on such fundamentals when he met Einhorn. The former Stanford volleyball assistant suffered a stress fracture in his back in college, and during his recovery he became obsessed with movement. He tried physical therapy and strength-and-conditioning drills and, eventually, formed a new discipline at Apiros, the practice he founded.

About two years ago, a mentor asked Einhorn about the root of the movements he had studied. In evolution, which are preserved, and which are jettisoned? Einhorn compared the anatomy of different animals and reduced each "organism . . . to a means of locomotion." He believed he had found a skeleton key to conditioning - train the body as it had evolved to be trained - and pointed to humans' most basic state. Babies instinctively understand how to operate against gravity, from crawling to squats.

"They haven't learned it through practice or a celebrity Instagram trainer," Einhorn said. "Those same biological processes have been going on for millions of years."

When Schweitzer and Einhorn began working together, Schweitzer felt worn down with a bulged disc in his back and ankle sprains. They started by correcting his posture, focusing on exertion rather than weight - "a handstand at 10 seconds of max effort is the same as bench-pressing maximum weight," Schweitzer said - and drawing inspiration from "elite movers," such as ice skaters, break dancers and rock climbers. Within two years, Schweitzer's squat increased from 545 pounds to 675 and he felt better, with fewer small, nagging injuries.

"There's not some secret; we're not rewriting movement or anything," Schweitzer said. "It's just a different lens."

This offseason, Schweitzer signed with the Redskins and is expected to compete with Wes Martin to start at left guard. He's focused his workouts on "rotational movement" because, while he maintains a weightlifting baseline, he believes range-of-motion training maximizes athletes. It reduces pain and allows players to be at their best every day in a league that prizes availability. He also said that, as the NFL speeds up every year, the best players are strong and mobile.

Schweitzer, a fifth-year veteran, pointed out that the average NFL player's career lasts about three years. He believes "a lot" of them end early because of injury, some due to unavoidable "bang-bang" plays, but far more to the effects of accumulated ailments. Inefficient movement and "asymmetries" break down the body, Schweitzer said, and he wants to minimize that risk.

"I feel amazing right now," Schweitzer said. "I'm getting close to 330 [pounds] - I'm 325 right now - and I can do all these things. It's great because, growing up, I thought these movements just weren't for bigger people."

Einhorn worries the NFL will experience an injury spike when players return to the facilities and gyms they've been absent from for months. But he doesn't fret about Schweitzer - provided he continues to take the same level of care of his body once practices and games resume.

"How [Schweitzer] recovers during the season," Einhorn said, "will be just as important as what he's doing now."

By June, after Northern Virginia eased into reopening, Schweitzer no longer needed to scale his deck. He and Shelby found a bouldering spot on a nearby trail called Bear's Den. Schweitzer planted his feet, grabbed onto an exposed rock lip and shimmied up, up, up, as high as this quarantine training would take him.