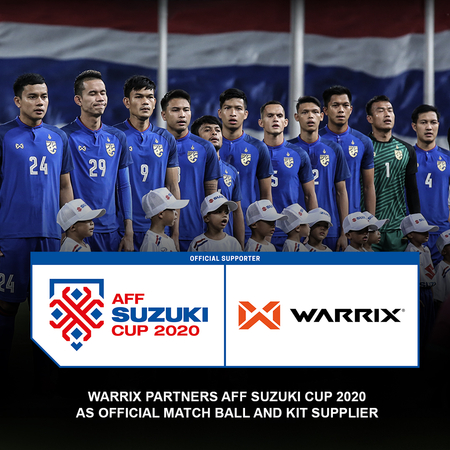 SPORTFIVE announced today that Warrix, one of Asia’s leading sports apparel brands, has been appointed the official football supplier of the AFF Suzuki Cup 2020. This is the first time that Warrix is partnering with South East Asia’s illustrious football championship and underscores the company’s ambition to distinguish its brand in one of the world’s fastest growing economies.

Under the terms of the agreement, Warrix will be the Official Match Ball Supplier for all matches of the AFF Suzuki Cup 2020 and will supply the ball boy kits and referee kits throughout the event. It will also produce apparels, bibs and captain armbands for the tournament.

As an official football supplier of the region’s most highly-anticipated football tournament, Warrix can look forward to receiving unprecedented levels of exposure and engagement opportunities with football fans across the region. The Warrix logo will be prominently displayed on multiple platforms, including the official tournament website, event backdrops, in-stadia TV commercials and other official tournament print collaterals. The brand will also have the opportunity to display its ball and products at the event, and organise fan activities and promotions around the matches.

In addition, the partnership grants Warrix the rights to use the official tournament logo across its marketing platforms as well as sell co-branded merchandise and products during the tournament.

Mr Wisan Wanasaksrisakul, Managing Director, Warrix Sport Co., Ltd., said, “We have continuously strived for innovation in our products using the latest technology as we believe in providing quality sportswear and equipment to enhance athlete performance across all sporting levels. Having sponsored various national football teams and major football clubs in South East Asia, this latest partnership with the AFF Suzuki Cup further underlines our commitment to grow and develop one of the most popular sports in the region.”

Malcolm Thorpe, Managing Director, South East Asia at SPORTFIVE, said, “The AFF Suzuki Cup is the most important showcase of South East Asia’s greatest football talents, and we are delighted to facilitate this strategic partnership with Warrix. We are confident that Warrix’s high-quality sport apparel and equipment will greatly enhance the tournament experience for players, volunteers, officials and fans, and elevate the tournament to a new level.”

Warrix previously supported the Myanmar Football Federation (MFF) at the MFF Warrix Futsal Open Cup held in Mandalay last year and was most recently the Official Sportwear for the 2020 Buriram Marathon in Thailand.

Scheduled from November to December, the AFF Suzuki Cup 2020 will once again unite the passion of football fans in the whole region and an increase in viewership is expected as the event continues the home and away group stage format, which drew fan attendance of more than 750,000 for the 2018 edition.