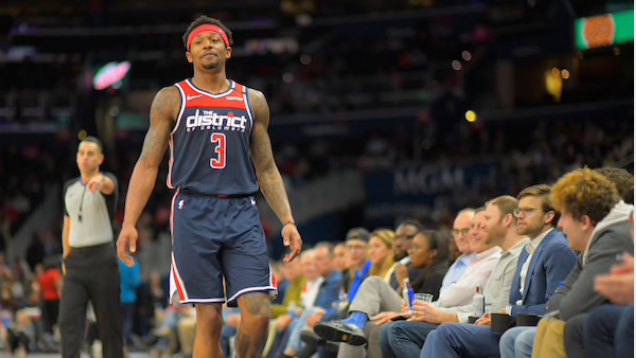 Bradley Beal has not yet reached a decision about returning to play in a modified continuation of the 2019-20 season. MUST CREDIT: Washington Post photo by John McDonnell

WASHINGTON - Bradley Beal has not yet made a decision about joining the Washington Wizards when the NBA season resumes near Orlando, Fla., at the end of the month.

Washington's all-star guard cited concerns over potential injuries as the primary reason for his hesitation.

"I'm still working my tail off every single day as if I am playing. Definitely, it's more or less going to be a decision that comes down to the medical staff and I, just because of our precautions and coming back from being 0 to 100, then I have some nagging stuff at the end of the year we're trying to clean up," Beal said Wednesday in a virtual news conference. "We're looking at it from all angles, but I'm definitely working out every single day here, and it's good to be back in our facility. But I'm not swayed one way or another."

Not having Beal in Florida would make an already tough road to the playoffs nearly impossible for the Wizards (24-40) during the eight-game regular season that begins July 30. Washington will already be without forward Davis Bertans, the team's best three-point shooter, who has opted to sit out. Beal's absence would have an even bigger impact - the guard led the team with 30.5 points per game this year and became the sixth player in NBA history to compile 50 or more points on consecutive nights.

Beal said he spoke with Bertans before the sharpshooter made his decision to sit out the rest of the season public.

"I didn't feel any type of way about Bertans's decision," Beal said. "He actually contacted me before he officially announced it and I actually kind of - I don't want to say forced him to not play - but I supported him in every way, he explained it and just seeing where he comes from, seeing his situation and understanding what's at stake for him in his future, 100% I understand it. On top of that, he has a family, he has a wife and a daughter he has to look after, and they're back home in Latvia. . . . I have nothing but respect for his decision."

As for Beal, having the proper amount of time to get into basketball shape before playing eight pressure-packed games in 14 days wasn't his only hesitation with retaking the court. The 27-year-old father of two was forthcoming about his trepidation with the quality of off-court life in the NBA's so-called "bubble" at the ESPN Wide World of Sports Complex.

Another Washington athlete - Mystics guard Natasha Cloud - has opted to sit out the rest of her season, planning to instead use the time to focus on social justice concerns. On that issue, Beal feels as though NBA players will be able to speak out on issues and compete without one distracting from the other.

"I feel like we can still raise that awareness, we can still bring attention to what's going on in the world by using our platform, by utilizing names on the back of the jerseys, doing it until people get pissed off and tired of seeing it," Beal said.

But concerns about mental health and what daily life will look like inside the bubble - a bubble that's located in a coronavirus hot spot - lingered.

Inside the bubble, Beal wondered whether days would be more than playing basketball and sleeping.

"I think that's what a lot of guys are concerned about, that we can't just leave," Beal said. "We can't just order whatever food we want, we can't just do activities we would want to do, we can't go to our teammates' room. There's a lot of [stuff] that we can't do. It's tough. I get you on a mental awareness standpoint of, you're so used to doing this, that and the third on the road, and now you're constrained.

"It's almost like, what kind of situation can we create in a perfect world? We want to be safe, but we want to come back and hoop, we want to make money, we want to make a statement. There's so much that we're trying to grab with just basketball."

Should Beal decide to sit out the rest of the season, he would be the highest profile player without an extenuating medical situation to opt out. Players coming back from injury such as Beal's teammate John Wall and the Brooklyn Nets's Kevin Durant and Kyrie Irving won't be on court in Florida, and other players - including DeAndre Jordan, Trevor Ariza and Avery Bradley - have decided to sit out. But thus far, no player of Beal's stature - nor individual importance to his team - has opted against playing.