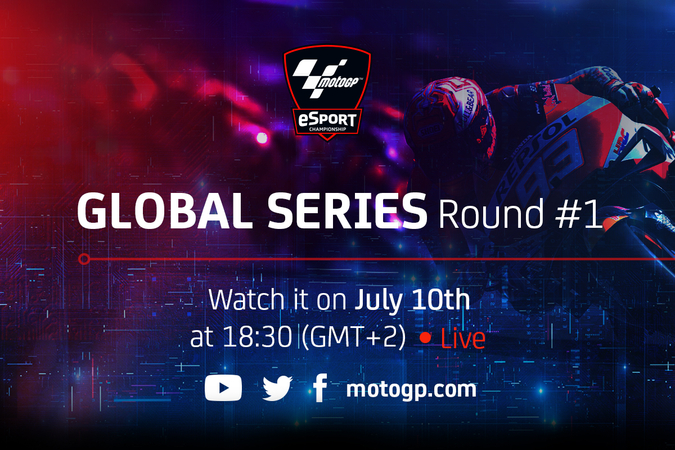 After an incredible set of Online Challenges and an exciting Draft Selection, it’s almost time for the first MotoGP™ eSport Championship Global Series event of the year. Dorna Sports’ eSport projects continue going from strength to strength this season, with Virtual Races and two Virtual Grands Prix initially taking centre stage as on-track competition was on hold – the events generating 331 million impressions and gaining 52 million views – and the dawn of a new Talent Promotion programme, the WINDTRE Rising Stars Series. Meanwhile, the 2020 MotoGP™ eSport Championship has been underway since March, going from thousands of entrants in the Online Challenges to the final 11 now set to race it out for the crown in the four-round Global Series.

A total of 22 gamers (16 from Europe, 6 from the Rest of the World) were entered into the Draft Selection phase, with that then whittled down to the 11 riders who have been chosen by the MotoGP™ teams as their competitors in the Global Series. The 11 hail from Australia, Brazil, Indonesia, Italy and Spain, and each rider was selected after some stellar time-attack performances in the Online Challenges – creating an incredibly strong Global Series entry list. They’re fighting it out for the crown, and there are also some incredible prizes at stake: first place takes home a BMW M235i xDrive Gran Coupé, second an Aprilia RS 125 GP Replica and third a new Lenovo Legion Y730 Laptop – and there are Red Bull and MotoGP™ VIP Experiences up for grabs too, as well as a pole position prize from partner TISSOT.

All that’s left to do now is race, and the time is upon us. Round 1 of the hotly-anticipated Global Series is now ready for lift off, and will be broadcast on the 10th of July at 18:30 (GMT +2). The first event will take place online, whereas the further three will be announced at a later date and take place later in the season – with the format depending on the situation regarding the Covid-19 pandemic.

Presenters Jack Appleyard and Jack Gorst will host the hour-long show, which will begin with highlights of qualifying before the 11 riders take on two races. The first is eight laps of the Autodromo del Mugello, before Race 2 sees them take on the Circuito de Jerez-Angel Nieto for nine laps. The riders will again be playing on the new official MotoGP™20 Videogame from videogame developer, publisher and longstanding partner Milestone – which is available to buy now – with race direction and the event powered by Lenovo PCs. The points system for Round 1 will mirror the MotoGP™ World Championship, with 25 points for a win, before Rounds 2-4 award double points.

Who will start their campaign on top? Find out on Friday the 10th of July at 18:30 (GMT +2) as the 2020 MotoGP™ eSport Championship Global Series gets in gear!