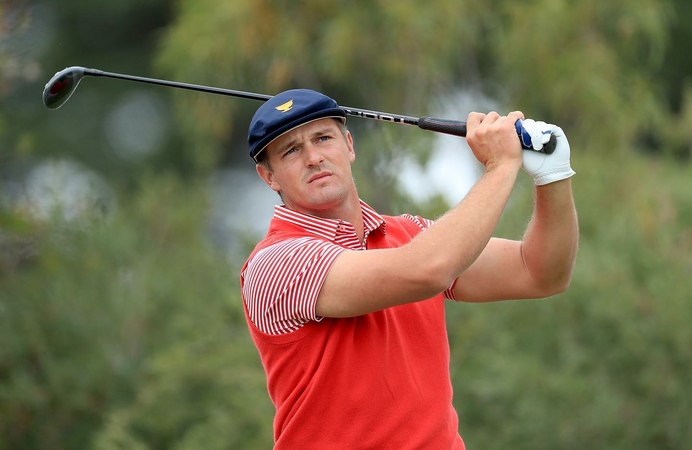 He’d packed on 40 pounds of muscle, and now Bryson DeChambeau kept saying he wanted to be the house, as in the casino, because the house always wins. Or often wins. Or something like that.

Still, there was a sliver of doubt. Would outdriving everyone by 30-50 yards a hole inevitably yield trophies? Well, not inevitably, but, you know, would it work? Could it work?

It could, and it has.

“It’s a little emotional for me,” DeChambeau said after firing a 7-under 65 to beat Matthew Wolff (71) by three at the Rocket Mortgage Classic at sun-splashed Detroit Golf Club on Sunday. “Because I did do something a little different, I changed my body, I changed my mindset in the game, and was able to accomplish a win while playing a completely different style of golf.”

For the fourth week in a row the tournament was played in front of no fans due to the ongoing coronavirus pandemic, but that’s not to say there wasn’t a crowd. A large group of Black Lives Matters demonstrators could be heard marching outside the club gates as the golfers played on.

“I love that everybody is voicing their opinion,” DeChambeau said. “And they deserve to do so.”

The soundtrack was a stark contrast to the telltale twinkle of the Mr. Softee ice cream truck, which Wolff had credited for his stellar play Saturday. He will try to quickly forget his ghastly front nine in the final round, and almost rendered it moot with an array of fine shots on the back.

Wolff birdied 12, 13 and 15 to cut the lead to one, but DeChambeau birdied his last three holes to leave no doubt.

“I’ve shown people that there’s another way to do it,” he said.

It was his sixth career PGA TOUR win and seventh straight top-10 finish. He led the field in Strokes Gained: Off the Tee, and not only led in driving distance, too, but his 350.6-yard average for two measured holes was the highest number by a winner in the ShotLink era. DeChambeau is playing such a different game he had the honour at the 399-yard 13th hole but had to wait for the green to clear – he let playing partner Troy Merritt hit first, instead.

Wolff is another disrupter with his unorthodox swing, and he was all smiles for the first three rounds, when his 25 birdies and eagles were the most of any player at any tournament this season. But it took him too long to find his game in the final round, by which time DeChambeau could sense the finish line.

“Yeah, it was definitely a grind out there,” Wolff said after birdies on four of his last seven holes. “Didn't start off really well at all, wasn't hitting it how I was the beginning of the week, and feel like I was really getting some bad breaks as well, which was pretty unfortunate.”

Still, it was his first top-10 finish since his maiden TOUR win at the 3M Open a year ago.

“Bryson played great,” he said. “Seven under, you know – it’s not like I gave it to him. He definitely earned it. Kudos to him.”

Said DeChambeau, “I was kind of in my own world today.”

Wolff’s back-nine surge got more interesting when DeChambeau got in trouble off the tee and pitched out into the hazard at the par-5 14th, leading to bogey. But in the end, there was too much front-nine damage to undue even for the explosive Wolff, and in the winner’s press conference DeChambeau, cradling the round, red Rocket Mortgage trophy, said he planned to work out in the morning. (Of course.)

Still, questions remain. With DeChambeau, they always do. How will his new style translate in the majors? Will scarfing down steaks and potatoes and protein shakes, and pumping iron feverishly, hold up over the long haul? Is he still getting better? What happens if and when he dials in his short irons? Will anyone stand a chance? And what about imitators? Will others on TOUR try to mimic the DeChambeau way?

“I hope it's an inspiration to a lot of people that if they set their mind to it, you can accomplish it,” said DeChambeau, who moved up to fourth place on the FedExCup points list. “It just takes a lot of hard work, a lot of figuring out things that you may not know and understand yet. But if you keep … working on it, figuring stuff out, eventually you'll get a little bit better each and every day, and hopefully that leads to something great in the end.”