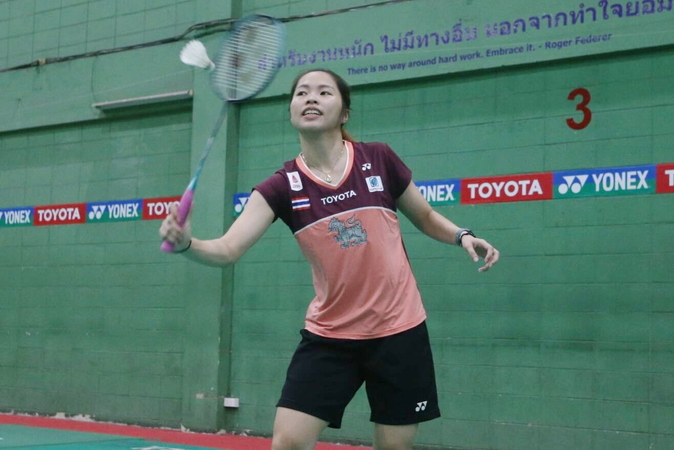 Former world No 1 Ratchanok Intanon has her eyes firmly fixed on an Olympic medal as the Thai badminton body targets two more slots for the 2021 Tokyo Games.

Ratchanok, middle, during a practice session.

The 2013 world champion, along with her fellow national players, resumed group training yesterday after the government eased the lockdown measures to contain the Covid-19 outbreak.

It’s been almost four months since the country’s ace last played in a competition -- the All England, where she made it to the quarter-finals. Like any other athlete, Ratchanok has no tournament to enter due to the pandemic.

“I still keep practising although no one is certain when tournaments will really be organised again,” said Ratchanok, currently No 5 in the world. “We still have to stick to our routine regardless of the ongoing circumstances,” she added.

A series of world tour circuits have been either suspended or cancelled, including the Thailand Open which has been rescheduled for December. However, as the number of coronavirus cases is still growing at an alarming rate, there is no guarantee that a world tour level event can resume anytime soon.

“As events could be cancelled again, I may either return to the circuit at the end of this year or start it again next year,” Ratchanok said.

The Thai badminton queen, nevertheless, is keeping her fingers crossed that the Tokyo Olympics, originally due this month, will really take place next year. It will be her third attempt in the quadrennial sports extravaganza. Her best result was the quarter-final in London eight years ago.

“As I’m already 26, I hope that the Olympics will really take place next year. I will put all efforts to prepare myself for the Games. I hope to win a medal in Tokyo,” said Ratchanok, one of the six Thais who have already qualified for the Games.

“The race to Tokyo [Olympics] is no longer so competitive with 3-4 [Olympic qualifying] tournaments scheduled next year. I will have to maintain my level and at the same time try to strengthen some aspects of my game.

The Badminton Association of Thailand, under the administration of president Khunying Patama Leeswadtrakul, expects two more berths, for women’s singles and men’s singles, before the Olympiad starts in August next year.

“We still have enough time before the Olympic cut-off date [April 2021]. Once the qualifying events start, we will send our athletes to take part and try to win two more quotas,” Patama said.