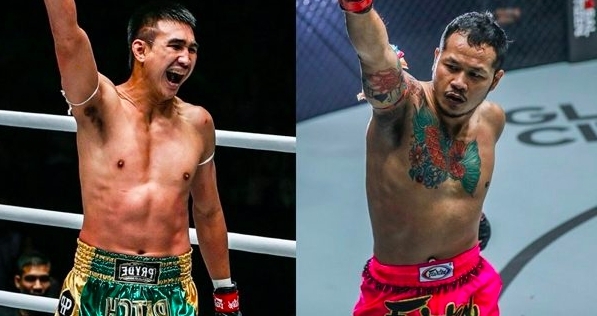 Reigning ONE Featherweight Muay Thai World Champion Petchmorakot Petchyindee Academy is ready to put his title on the line against the legendary Yodsanklai IWE Fairtex in what is sure to be an instant classic.

The two Nak Muay will go head-to-head in the co-main event of ONE: NO SURRENDER, set for Friday, 31 July in Bangkok, in ONE Championship’s first event back after announcing resumption of its flagship event schedule.

As such, both Petchmorakot and Yodsanklai have been working hard in the gym, preparing for the toughest match of their respective careers.

“I am ready to rock the world,” Petchmorakot said in a short clip shared to his Instagram page.

The clip depicted Petchmorakot in intense training, as he showcased the speed and power of his kicks. After sucking down some oxygen from a tank, Petchmorakot proceeded to rail off 21 consecutive high-impact kicks, the last one delivered with dramatic impact.

Petchmorakot captured the inaugural ONE Featherweight Muay Thai World Championship with a unanimous decision victory over Pongsiri P.K. Saenchaimuaythaigym last February, before Covid-19 ravaged the globe and caused lockdowns in nearly every country.

He’s currently on a three bout win streak, and is staring at perhaps the biggest victory of his career should he defeat Yodsanklai.

On the other side of the spectrum, the challenger Yodsanklai also took to Instagram to show himself getting ready for another war. In contrast to Petchmorakot’s kicks, Yodsanklai instead worked the pads and displayed his powerful boxing combinations.

Yodsanklai, conversely, has not had an ideal start to his ONE Super Series run.

The Thai legend brought a 32-bout win streak into ONE Championship, but was met with adversity early on, dropping a shocking unanimous decision loss to Samy Sana in just his fourth outing for the promotion.

He was then knocked out in the second round by Jamal Yusupov in late 2019.

The bout against Petchmorakot represents a chance for redemption for Yodsanklai, and another opportunity to put a world championship up on his mantle, should he be able to rise to the occasion.

At 35 years of age and a veteran of many memorable ring campaigns, Yodsanklai still has speed and pop in his punches. He will, however, need to be in the best shape of his career if he wants to upset the much younger champion in the 26-year-old Petchmorakot.

ONE Championship returns on Friday, 31 July, with ONE: NO SURRENDER. The main event features ONE Flyweight Muay Thai World Champion Rodtang “The Iron Man” Jitmuangnon defending his title against the phenom, Petchdam “The Baby Shark” Petchyindee Academy.

Tags:
ONE Championship ONE: NO SURRENDER