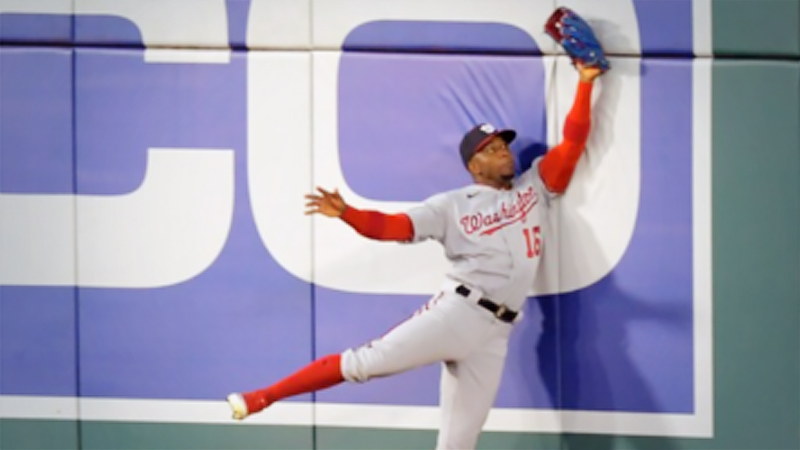 WASHINGTON - A bullpen combination of Ryne Harper, Sam Freeman, Javy Guerra, Tanner Rainey and Daniel Hudson doesn't sound, at first mention, like a winning bingo card. But that's who relieved for the Washington Nationals on Thursday, and the Nationals held on to beat the Toronto Blue Jays, 6-4, in another road game in their own park.

The Blue Jays, shunned from Canada for 2020, had their upcoming weekend series against the Philadelphia Phillies postponed. Word officially came in the third inning, right as the Nationals' bullpen was beginning to stretch. The Nationals are familiar with shifting circumstances, having had an upcoming trip to Miami entirely wiped out. 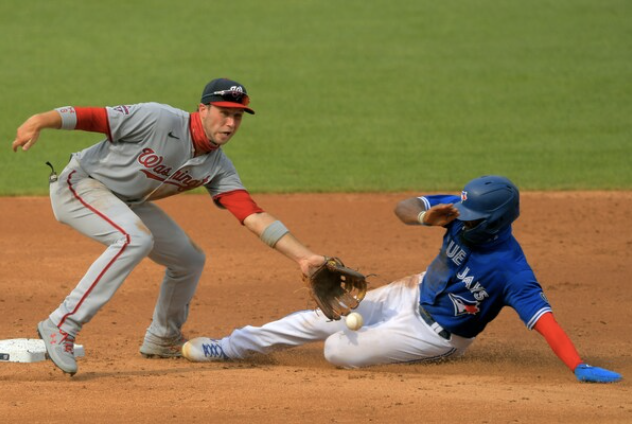 That's life in baseball during a pandemic: an ever-evolving schedule and odd winning formulas. Erick Fedde was lifted after 3 1/3 innings, then had his shaky outing erased by the patchwork bullpen and the Nationals' bats. The offense collected 13 hits and was keyed by Starlin Castro and Carter Kieboom. It all helped the Nationals improve to 3-4.

"I always say that I believe in these guys," Nationals Manager Dave Maritnez said, nodding to the offense's slow start to the summer. "They'll get it. They'll start hitting the ball."

Because the Miami Marlins are shut down for the rest of this week and the Nationals won't travel to face them, Washington's next game will be against the New York Mets on Tuesday. Martinez is calling it a "mini all-star break." They will simulate innings this weekend, hoping to stay fresh by hitting and pitching against each other.

But what Martinez really wants is for his club to get healthy. Juan Soto is expected to work out Saturday after testing positive for the novel coronavirus July 23. The District of Columbia will clear him only after he stays isolated for at least 10 days, a Centers for Disease Control and Prevention guideline for anyone who contracts the virus. And beyond Soto, who has yet to play this season, the Nationals have been without first baseman Howie Kendrick, starter Stephen Strasburg and reliever Wander Suero.

Suero went on the injured list for undisclosed reasons July 13. He has been throwing in Fredericksburg, Va., with the other alternate players, but his cutter velocity has yet to tick up. Martinez also revealed that reliever Will Harris is dealing with groin soreness, something the Nationals hope to fix while their schedule is paused.

In the meantime, the Nationals had to wrestle Thursday with Blue Jays starter Hyun-jin Ryu. The left-hander leaned on his change-up and slider, an attempt to keep the Nationals off-balance and guessing. But they were able to juice his pitch count in the early innings, starting with Castro's 12-pitch at-bat in the first. Then they jumped on Ryu throughout.

"I would love to play another game tomorrow. We've had some success the last couple days" Kieboom said. "I know we would all like to kind of build off of that and keep going, because we're heading in the right direction."

The early support was needed - Kurt Suzuki's two-run double in the third and Michael A. Taylor's two-run homer in the fourth to give the Nationals a 4-1 lead - once Fedde's start took a sharp nosedive. His command wavered in the fourth when, in the span of three batters, he yielded a solo homer, a single and a walk. That led Martinez to come get Fedde, who threw just 57 pitches before Harper jogged in.

Harper, acquired in a trade with the Minnesota Twins this offseason, has been equally durable and efficient. This was already his fourth appearance in seven games. After he stranded Fedde's last two runners, the Nationals stretched their lead back to three runs on Asdrúbal Cabrera's RBI double. Castro, who finished with three singles and a double in five at-bats, scored on the hit. Kieboom, in his second start at third base, added two singles and two walks. He has reached base in six consecutive plate appearances.

Harper soon polished off his second multi-inning effort of the young season. He says he can throw every day thanks to a shoulder program that keeps his right arm perpetually loose. He uses a curveball about 50% of the time. He can also make it move in a half-dozen directions, giving him multiple pitches for the price of one.

To end his outing in the fifth, he elevated an 88-mph fastball that Vladimir Guerrero Jr. bounced to short for a double play. That the pitch was well over the plate, and right where Guerrero should handle it, showed the deception of Harper's stuff. Not one for theater, he clapped once into his glove while exiting. He has allowed no runs in five innings and struck out a third of the batters he has faced. Only two relievers in baseball have shouldered a heavier workload.

"His ability to mix up pitches and throw strikes," Martinez said of what's impressed him most with Harper. "He very seldom gets behind on a hitter."

After Harper came two journeymen in Freeman and Guerra. And after Guerra, who pitched around a solo homer in the seventh, came Rainey and Hudson for the finish. The pair have already emerged as the manager's most-trusted relievers this season, even with Will Harris and Sean Doolittle in the bullpen.

Rainey allowed a homer to Teoscar Hernández, his fourth of the series, but settled down to avoid more danger. Then Hudson entered, Victor Robles crashed into the wall to make a leaping catch behind him, and, soon, a double-edged break began.