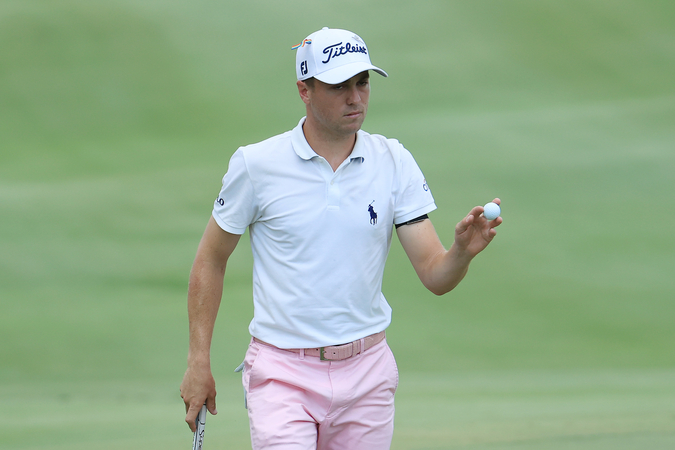 Losses are often learning experiences, and that was the case for Justin Thomas at the World Golf Championships-FedEx St. Jude Invitational.

Losing a three-stroke lead three weeks ago helped him make an unprecedented comeback at TPC Southwind. Thomas now has 13 PGA TOUR victories, but he won this latest one in a way that he never had.

He started Sunday in fifth place. Never before has he won after starting the final round so low on the leaderboard. He also trailed by four, matching the largest final-round deficit he’s overcome on the PGA TOUR.

The victory kept him on an elite pace. Since 1960, only Jack Nicklaus and Tiger Woods have reached 13 wins at a younger age. Thomas is 27 years, 3 months and 4 days old.

Thomas got into position with a stellar 31 on the front nine. He missed just one green (he hit the fringe) and had birdie putts within 25 feet on all nine holes. He bogeyed the 12th hole but birdies on 15 and 16, the former made possible by a fortuitous bounce, were the difference.

This was Thomas’ third win of the season, and first since the Sentry Tournament of Champions in January. He increased his lead in the FedExCup to more than 700 points and retook the top spot in the Official World Golf Ranking. This was his second World Golf Championships win, as well.

“It was a hard-fought day, but it meant a lot … how we did it, being four behind to start the day.” Thomas said. “I haven't exactly played well coming from behind in the past and I feel like I learned a lot from that.”

The margin of victory implies an easy victory, but it was anything but. At one point on the back nine, there were five players tied for the lead. A resurgent Koepka, who seems to have regained the form that’s netted him four majors, put pressure on Thomas until the final hole.

Thomas described it as a “grind.”

He spent most of the round unaware of how things stood, though. That was intentional. He didn’t see a leaderboard until accidentally staring at one on the 13th hole.

Thomas parred those two holes before hitting a poor tee shot on the 15th, a short par-4 with a creek that runs down the left side and in front of the green. His ball was headed toward the water, but it hit the cart path and bounced safely over the penalty area. Good breaks aren’t worth much if you don’t convert, though, and Thomas did by knocking his 51-yard wedge shot to 6 feet.

He birdied the next hole with another nifty wedge that carried a bunker before checking up and stopping 3 feet from the hole.

Thomas and Koepka, the past two winners of this event, had separated themselves from the field at that point, but Thomas appeared to have the tournament in hand when Koepka’s own pitch to the 16th rolled over the green. The bogey gave Thomas a two-shot lead.

Koepka has a knack for summoning his best golf in crucial moments, and he did that again Sunday, holing a 40-foot birdie putt from the fringe on 17 to pull back within a shot.

Thomas pushed his drive and approach well right on the 18th hole to ensure he missed the water. A bogey seemed possible, but Koepka drove into the water while Thomas was saving par with a chip he described as “pretty sick.”

This was just Thomas’ second win when trailing by more than two shots entering the final round. He’s held the 54-hole lead in eight of his 13 victories.

He also trailed by four entering the final round of the 2016 CIMB Classic, his second win on TOUR.

“I remember that day kind of being just at ease and just not worried about Anirban (Lahiri, the 54-hole leader) and other guys that were ahead of me,” Thomas said. “I was just strictly trying to make as many birdies as I could because I can't control what everybody else does.

“And that's what I tried to do today.”

Three weeks ago, he paid the price for letting his mind wander. He had a three-shot lead with three holes remaining at the Workday Charity Open, but bogeyed two of the final three holes and lost to Collin Morikawa in a playoff. He used that experience Sunday.

“I just didn't get ahead of myself anytime those last two, three holes, where I felt like my mind was kind of wandering and maybe thinking about winning,” Thomas said. “I basically just told myself to shut up and figure out what you're doing because I could lose that tournament just as easily as I won it today. I was really, really proud of myself to stay in the moment and get it done.”