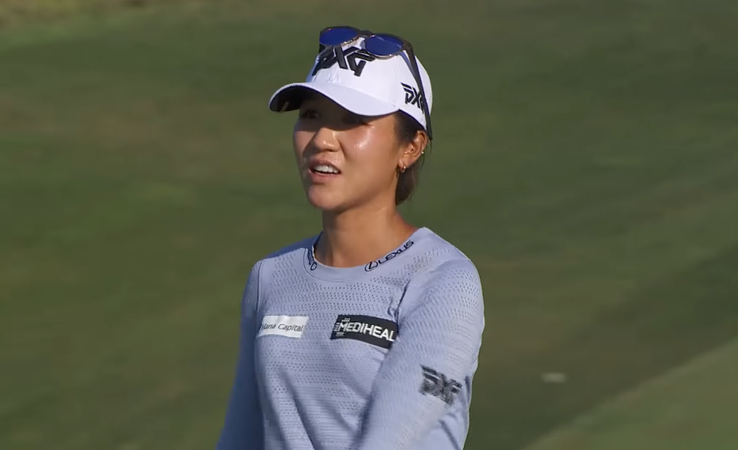 New Zealand’s Lydia Ko birdied two of her final three holes on Saturday, carding a third-round 3-under 68 and holds a large lead heading into Sunday’s final round at the Marathon LPGA Classic.

Ko, who won at Highland Meadows Golf Club in 2014 and 2016, sits at -16, four strokes ahead of American Danielle Kang and six strokes clear of Australian Minjee Lee and England’s Jodi Ewart Shadoff.

Ko nearly aced the par-3 second hole, leaving her tee shot just 6 inches short of the hole. She gave the stroke back with a bogey on the third hole, but that was the day’s only scorecard blemish. Ko cruised home with birdies at holes 6, 16 and 17, and now finds herself just 18 holes away from earning her third Marathon LPGA Classic title.

“I hit the ball really solid on the back nine. Like even the one fairway that I missed I felt like it was a really solid shot and I just pulled it a touch,” said Ko. “That's kind of the thought I need to take into tomorrow.”

Playing one group ahead of Ko, Kang had three birdies and two bogeys in her round of 1-under 70. Kang took the title at last week’s LPGA Drive On Championship and could become the LPGA Tour’s first back-to-back winner since Shanshan Feng in 2017.

“Some days your game is all there and some days you just kind of have to make it work and you have new challenges every day,” said Kang. “Today my challenge was to get it on the golf course and somehow shoot under par. I think that was my goal, and I think walking away without as big of a damage as I thought I could have made today as a win for me today.”

Ewart Shadoff struggled on Saturday, following her second-round 63 with a 2-over 73. Her round featured three bogeys to one lone birdie on the par-4 ninth, which was moved up to just 257 yards, more than 100 yards shorter than it played on Friday. Lee holed out for eagle from a greenside bunker at No. 18 to jump into a tie for third.

American Lindsey Weaver shot a 4-under 67 on Saturday and moved into solo fifth. The third-year player from Ohio is looking for her first career top-10 finish, having never finished better than 21st after being sidelined for much of 2018 with an injury.

Lydia Ko would earn the 16th victory of her LPGA Tour career and first since the 2018 LPGA MEDIHEAL Championship (April 29, 2018)

Just a year ago, Lindsey Weaver wasn’t sure if a career as a professional golfer was still in her future. Eight starts into her 2018 rookie campaign, the Ohio native was sidelined for 10 months due to injury. She made just six cuts in 2019 and had to head to Q Series to maintain her LPGA Tour status.

“I wasn't sure if I was going to go to Q-School last year and my mom was like, please just go,” said Weaver. “Give it one more shot. I was just like mentally and like emotionally just not there.”

As fate would have it, she finished fifth at Q Series, a showing good enough to convince Weaver to give the game another chance. Now, she heads into the final round of the Marathon LPGA Classic in fifth, just seven strokes behind Lydia Ko. After spending the unexpected break in play moving into a new Dallas-area home with her fiancé, Korn Ferry Tour player Zach Wright, Weaver feels she is finally in a good place with her life and her game.

“I feel like it kind of helped me to just kind of be like, Whatever,” said Weaver, who played collegiately at Arizona. “It's all going to like work out. I didn't have to put so much stress on myself and everything.”

Maria Torres said she felt the struggle when she returned to LPGA Tour action last week at Inverness Club. After missing the cut at the LPGA Drive On Championship, Torres said she went through some changes in her bag, making the back of her trunk feel like a golf shop with the number of clubs she was trying. But by Wednesday at Highland Meadows, she settled on a new driver and an older set of woods, setting the tone for this week at the Marathon LPGA Classic.

“I'm super happy with the changes,” said the 25-year-old Puerto Rican, who shot a third-round 67 and sits in solo sixth heading into the final day in Sylvania. “Just trying to keep the rhythm. I'm finding the rhythm after so many -- like a lot of time practicing and not playing like tournaments, so now I'm trying to find rhythm.”

Torres is playing the Marathon LPGA Classic for the second time in her career, missing the cut in 2019. Her 67 ties her lowest 18-hole score of 2020. Her best finish is a tie for fourth at the 2019 Indy Women in Tech Championship, but she said she’s looking forward to a the 18-holes in front of her rather than the result.

“Just go out there and play, and then we will see,” said Torres.

There are 10 spots available this week at the Marathon LPGA Classic presented by Dana for the 2020 AIG Women’s Open, to be held Aug. 20-23 at Royal Troon in Scotland. The 10 spots will be determined by the players with the 10 lowest scores after 72 holes at this week’s Marathon LPGA Classic. In the case of a tie for 10th, a series of tiebreakers have been set to determine the final qualifier. If one of the qualifiers elects to not play in the AIG Women’s Open, the spot will not go down to the next available player. Any unused spots will be allocated to the qualifier at the Aberdeen Standard Investments Ladies Scottish Open.

The qualifying leaderboard through the third round is as follows: