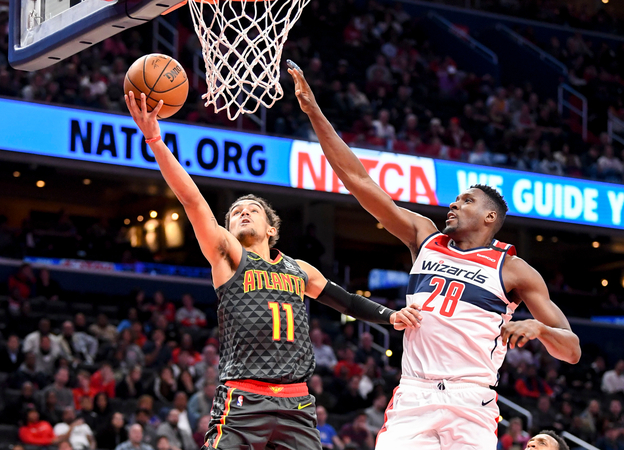 Official word came in from Scott Brooks sometime last week: Ian Mahinmi, the Washington Wizards' oft-injured, handsomely paid center, would probably not be playing during any of the Wizards' eight regular season games in the NBA bubble in Kissimmee, Fla.

The declaration came as little surprise to those familiar with both Washington's goals during the league's restart - to develop and test its young players with an eye on next season - and Mahinmi's history with the Wizards. The 33-year-old French national has struggled with injures since just about the day he signed his four-year, $64 million contract in 2016. He's appeared in 180 of a possible 314 games since then, or about 57 percent. He's used to his role as bench cheerleader and practice-session confidant.

Still, Brooks's statement raised the question. What is Mahinmi doing while he's in the bubble?

Mahinmi isn't preparing bubble delicacies, but he is cooking up conversation. In Florida, the young Wizards (24-44) are eating together as a team more than they have, and the dining room is Mahinmi's domain. Without Bradley Beal, John Wall and Davis Bertans present, the center has inherited a leadership role the likes of which he's never had in his 13 years in the NBA. He leads long, in-depth conversations about politics and relationships and life. He discovered that one teammate wasn't registered to vote and saw to it that he did.

For the past few months, Mahinmi has been one of the leading voices providing input as the Wizards' ownership group formed initiatives to increase voter participation and backed a Juneteenth march downtown. In the bubble, he's backing up that work by continuing the conversation among teammates and, in the final weeks of his contract with the Wizards, quietly crafting a legacy within the organization that has little to do with his on-court play.

"Just him building confidence, talking, encouraging us, talking about nutrition, talking about politics, voting, relationships, just laughing - whatever the case is, Ian just brings a veteran presence, and we all appreciate it," Ish Smith said. "We have some really deep talks that I can't get into. But he's been special just being here."

Mahinmi knows how important those free-flowing discussions are to laying a strong organizational foundation. He's found himself often thinking back to his time in San Antonio lately, both because this is one of the more global Wizards roster Mahinmi has been apart of and because the Spurs ate together. A lot.

"At lunch, it's a round table. And check this out: today, you have Moe [Wagner] and Isaac [Bonga], German and German-Congolese. You have Jerian Grant, Ish Smith representing America. You have Jerome [Robinson], who is American but also has a little Italian background," Mahinmi said. "And then you have me. And we're going back-and-forth, back-and-forth, back-and-forth. Those conversations turn into big-time exchanges. This, to me, is the benefit of being in the bubble.

"I feel like this is why the Spurs have been such a winning franchise, they understand that diversity is key. They allow the guys to get to know each other, to be themselves and to grow together. It's not about, 'You need to become like someone else.' It is, 'We're adding you to the pot.'"

In nearly four years with the Wizards and more than a decade in the league, Mahinmi had never felt pulled to speak up as much as he does now.

It's not just that he has room to do so with Beal and Wall's contributions relegated to text messages and Zoom chats. It's that Mahinmi made a decision this summer in the wake of George Floyd's death to talk about heavier issues than basketball with his friends and teammates. It had been easy for the big man to distance himself from the country's warts in the past by retreating into his French identity. But with three American-born daughters at home, Mahinmi made a commitment to learn about civil rights and social issues in this country.

He read, watched documentaries and had a family friend who is a judge over at his offseason home in Texas. She took Mahinmi and his extended family through details as granular as why term limits for local officials are the way they are and drilled home the importance of voting - especially voting locally.

Getting out the vote became Mahinmi's crusade, even though he can't cast a ballot in the United States.

"If we're going to move forward in this democracy, I understand that the first thing is for us to be heard," Mahinmi said. "We did that. We were in the streets. The second step, you have to vote, and I can't stress enough the local vote. Because that's what impacts the everyday life."

Mahinmi, alongside Beal, Smith and the Mystics' Natasha Cloud, was one of the louder player voices pushing the teams' ownership group toward increasing voter participation as a pet cause; Monumental Sports and Entertainment partnered with the nonprofit When We All Vote last month. The organization is also in discussions with the DC Board of Elections about the possibility of using Capital One Arena as a potential polling place this November.

As his contract nears its end, Mahinmi would be happy if it's the off-court work he's done that makes a difference in the Wizards' organization the most.