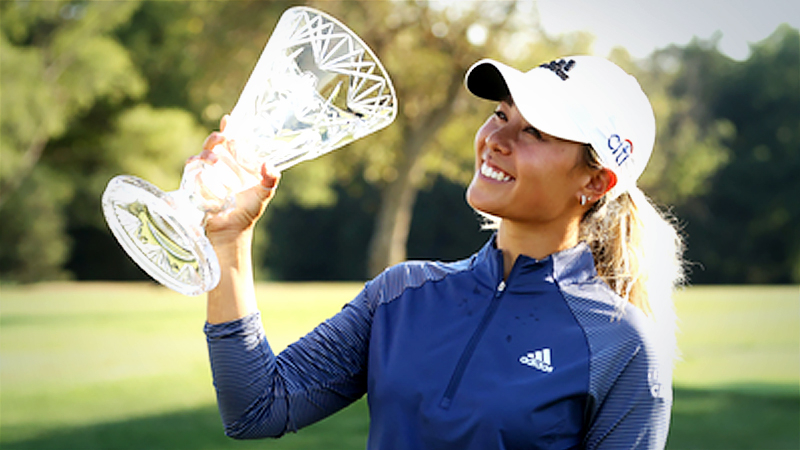 When Lydia Ko stepped to the 13th tee at the Marathon LPGA Classic presented by Dana, she had a five-stroke lead over Danielle Kang and appeared to have a third tournament title firmly in her grasp.

Six holes later, it was Kang hoisting the trophy after Ko fell apart down the stretch at Highland Meadows Golf Club.

“Definitely, it was a lot of up and downs going on. I made some little mistakes here and there, but I definitely answered with some birdies, which was good, and kept me in my momentum,” said Kang. The back nine, I just had six holes to play and all of a sudden I was five shots back. That three-putt was a bit much, and I just said to my caddie, ‘Man, that's too costly.’ He said, ‘You got six holes left, five down.’ That put me in a little bit of a match play mentality, and hit some great shots coming in. I think that was crucial.”

Kang converted long birdie putts at 13 and 14 while Ko bogeyed 14, cutting Ko’s advantage to two strokes with four holes to go. After Ko bogeyed the 16th, she took a one-stroke advantage to the final hole.

On the par-5 closing hole, things truly came undone for Ko. Her approach sprayed far right of the green and after taking relief from a cart path and deliberating between clubs, she skulled her third shot across the green and into the greenside rough. Kang’s approach found a left greenside bunker, but she successfully got up and down for par. Ko’s fourth shot hit the fringe and trickled back into a bunker, leading to a catastrophic double bogey that handed the title to her close friend Kang.

“I was trying to bump it there. It was in a pretty fluffy lie,” said Ko of her shot from the bunker at 18. “It was probably going to be a tough one for me to hit a high one. And with how the greens are reacting, I think if I had hit a high one, I was probably going to end up on the other side of the hill. So I just don't think I hit it as hard as I should have maybe into the bank, but it's, you know, very like minimal things. Even my first chip. If I had hit it 4 feet shorter, then maybe it would've stayed on the green. Who knows?”

England’s Jodi Ewart Shadoff recovered from a third-round 73 to shoot a bogey-free 67 on Sunday and tied for second with Ko at -14. Australian Minjee Lee holed out for eagle from the rough at No. 17 and then birdied the closing hole to finish alone in fourth at -13. A trio of Americans rounded out the top five in a tie for fifth – Andrea Lee, Marina Alex and Emma Talley.

The Marathon LPGA Classic is always a joyous week for 12-time LPGA Tour winner Stacy Lewis, who was born in Toledo and enjoys her annual visit with extended family. While the COVID-19 pandemic put a damper on the full festivities, Lewis is extra thankful for this week’s tournament, just the Tour’s second competition since February.

“Doesn't feel like you're on the road as a normal tournament site,” said Lewis of her time in Toledo. “So it was a fun week again. Even though the crew didn't get to come out every day, still a lot of fun off the golf course.”

Lewis tied for third at the 2019 Marathon LPGA Classic, the high point of her first season returning to competition after giving birth in 2018. With a toddler at home, the five-month break due to the pandemic was perhaps a blessing in disguise. A final-round 65, a bogey-free walk around Highland Meadows, sends a well-rested Lewis off to two weeks in Scotland in very good spirits.

MARINA ALEX HAPPY TO BACK ON THE COURSE

After the long break, a final-round 67 at the Marathon LPGA Classic put a big smile on Marina Alex’s face. Her unexpected offseason was made even longer when she tested positive for COVID-19 prior to traveling to Ohio, even though she never showed any symptoms. With a clean bill of health after the required quarantine period, Alex finished T5 at Highland Meadows Golf Club.

“First couple days were tough. Just been ages since competing, as I'm sure everyone has said that, especially last week and this week,” said Alex after her round. “But it was good. I felt like today it finally was a little bit more of how it felt to compete before we had a stop. Good to get a little momentum.”

This is by far her best finish at the Marathon LPGA Classic, never finishing better than 25th in her previous five appearances. For someone who admits to being slow to return to competitive form after an extended break, Alex feels this is a good sign for the rest of her season.

“I've always felt like I struggle the first few events back at the start of every year because I can't quite get the switch from practice to tournament,” said Alex, who earned her second consecutive top-five finish, joining a tie for fourth at the ISPS Handa Women’s Australian Open. “I think it comes easier or harder for some people, so to get off to a good start out of the gate like this was actually really refreshing. I didn't have a lot expectation for myself, so this was a good week.”

The LPGA Tour wrapped up its pre-charter testing on Sunday ahead of next week’s Aberdeen Standard Investments Ladies Scottish Open. A total of 120 players and caddies were tested in advance of their travel to Scotland and all of the tests came back negative.

There were 10 spots available this week at the Marathon LPGA Classic presented by Dana for the 2020 AIG Women’s Open, to be held Aug. 20-23 at Royal Troon in Scotland. The 10 spots were determined by the players with the 10 lowest scores after 72 holes at this week’s Marathon LPGA Classic. In the case of a tie for 10th, a series of tiebreakers have been set to determine the final qualifier. If one of the qualifiers elects to not play in the AIG Women’s Open, the spot will not go down to the next available player. Any unused spots will be allocated to the qualifier at the Aberdeen Standard Investments Ladies Scottish Open.

The following 10 players qualified for the AIG Women’s Open:

The CME Group Cares Challenge is a season-long charitable giving program that turns aces into donations. CME Group donated $20,000 for each hole-in-one made on the LPGA Tour in 2019, with a minimum guaranteed donation of $500,000 to St. Jude Children's Research Hospital, which is leading the way in how the world understands, treats and defeats childhood cancer and other life-threatening diseases.

Louise Ridderstrom made the fifth hole-in-one of the 2020 LPGA Tour season on Friday, acing the 135-yard eighth hole with an 8-iron. It was her fifth career hole-in-one. The 2020 season has seen five aces, for a total of $100,000 donated to St. Jude Children’s Research Hospital.