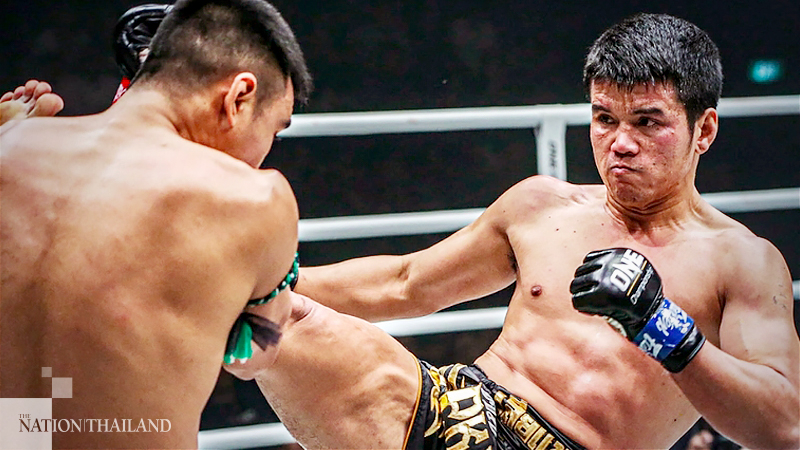 Four-time Muay Thai World Champion Pongsiri PK.Saenchaimuaythaigym believes a resounding victory in his next bout will be enough to earn him another shot at the ONE World Title, if all goes according to plan.

The elite featherweight talent is scheduled to face countryman Sorgraw Petchyindee Academy in a three-round Muay Thai contest at ONE: NO SURRENDER II, a closed-door, audience free event set for broadcast on  August 14 in Bangkok.

The stipulated four-ounce gloves will certainly make for an extra-exciting contest between the two explosive strikers. Pongsiri knows what he’s up against, and he’s confident he has the right game plan heading into their much-anticipated showdown.

“He (Sorgraw) is a big boxer. He is very skillful and has a defensive style. His main weapon will be his kicks,” said Pongsiri.

“[I think he will use] his jab, kicks, and maybe knee techniques – maybe the flying knee because he is taller than me, and my style needs to approach him first. So, he could use this to counter my style.”

Pongsiri has spent the bulk of his career competing in Bangkok’s most prestigious arenas, winning World Championships at the Lumpinee and Channel 7 boxing stadiums.

Known for his aggressive, never-back-down style and for always moving forward in the ring, Pongsiri joined ONE Super Series earlier this year, being thrust directly into an opportunity for the inaugural ONE Featherweight Muay Thai World Championship against Sorgraw’s teammate, Petchmorakot.

Although Pongsiri fell short, and Petchmorakot eventually captured the title, the rising young stalwart feels a victory over Sorgraw is all he needs to secure a rematch.

Against Sorgraw, Pongsiri is giving up over 10cm in height. However, this hasn’t deterred Pongsiri from taking up the challenge of facing a bigger and taller opponent. He will enter the contest laser-focused on executing a careful strategy that he believes will ensure his success.

“He is taller than me, so he can use this as part of his advantage for high kicking, and I must be aware of that. Also, I must be aware when I approach him because his elbow strikes can hit my head easily,” said Pongsiri.

“My fighting style is aggressive – it’s a never-back-down style. I have kicks and elbows as my trump cards. My kicking can stop my competitors, and my elbows can cause damage. They should be afraid of it.”

ONE: NO SURRENDER II is ONE Championship’s second event in Bangkok since resuming its flagship event schedule. The headline bout features a bantamweight Muay Thai showdown between former ONE World Title challenger Saemapetch Fairtex and countryman Rodlek PK.Saenchaimuaythaigym.

After the huge success of ONE: NO SURRENDER last July, Pongsiri wants to seize the moment and swing the momentum in his favor. An impressive victory here, the Thai warrior believes, will punch his ticket to another crack at the ONE World Title.

“If I win this fight, I will be ready for the belt. I need it. I need it as the glory for myself, for the camp, and for Thailand,” said Pongsiri.