Thai ONE Championship strawweight contender Pongsiri “The Smiling Assassin” Mitsatit is on the comeback trail, looking to bounce back strong after starting the year off on the wrong foot. Despite a recent skid which has seen him drop three straight, Mitsatit continues to pound away hard at the gym with his team at Tiger Muay Thai and believes his improved skills will carry him to victory in his next bout.

Mitsatit is scheduled to face ONE Warrior Series product Akihiro “Superjap” Fujisawa in a three-round catchweight contest at ONE: NO SURRENDER II, a closed-door, audience free event set for broadcast on Friday, 14 August in Bangkok, Thailand.

Knowing he needs to come well-prepared for his next outing, Mitsatit took the time out to study Fujisawa in order to craft a viable strategy.

“At first, when I knew that I had to fight Fujisawa, I didn’t know much about him. I heard his name, but I didn’t follow his fights before. So, I tried to search for his previous fights and study him as much as possible,” Mitsatit said.

“After I studied his fights, I can see that he has a good ground game, but not as good as some of the fighters I met before in ONE Championship. I think my striking is better than his, and that is my strong point.”

Mitsatit’s confidence in his striking abilities is well-placed. The 24-year-old has 10 victories to his name, 8 of which have come by knockout. 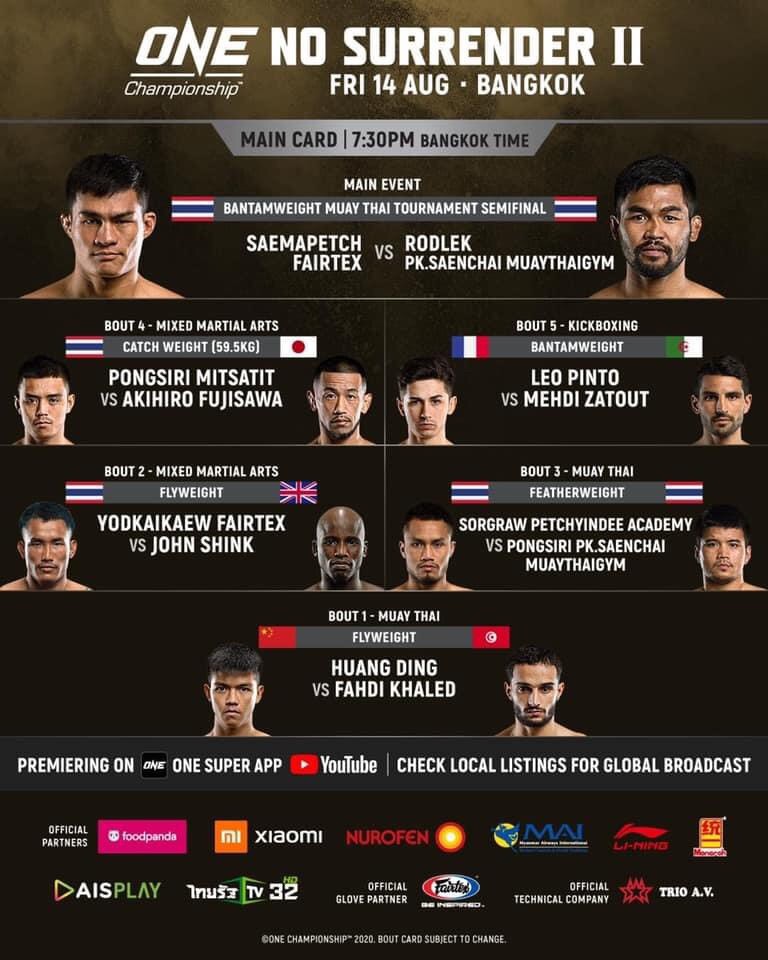 Against Fujisawa, however, Mitsatit must be prepared to grapple if necessary. Fujisawa has expressed interest in taking Mitsatit to the ground and testing his skills there. That being said, “The Smiling Assassin” feels he is ready should the action hit the mats.

“I prepared for this fight around a month ago with my coach George Hickman at Tiger Muay Thai,” Mitsatit says.

“I concentrated on attacking and defending by training Brazilian Jiu-Jitsu, wrestling, and also Muay Thai. I tried hard to develop my ground game together with my striking to make both stronger, especially my knee strikes and flying knees.”

ONE: NO SURRENDER II is ONE Championship’s second event in Bangkok since resuming its flagship event schedule. The headline bout features a bantamweight Muay Thai showdown between former ONE World Title challenger Saemapetch Fairtex and countryman Rodlek PK.Saenchaimuaythaigym.

A victory here would bring Mitsatit out of his slump, and put him back in the winner’s circle where he feels he belongs. Mitsatit’s ultimate goal remains to become a ONE World Champion, and he hasn’t taken his eyes off the prize.

“This win is really important to me because it will help me climb the ladder to a championship,” Mitsatit said.