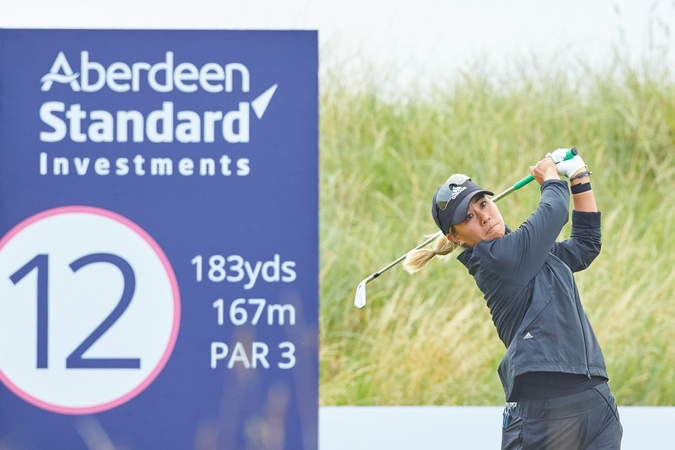 Danielle Kang took the LPGA Tour’s resumption of play by storm, claiming back-to-back victories at the LPGA Drive On Championship and the Marathon LPGA Classic presented by Dana. But that doesn’t mean she’s getting complacent.

The California native is still working hard on her game and walked off the course after today’s practice round at the Aberdeen Standard Investments Ladies Scottish Open still trying to figure out the links-style layout at The Renaissance Club.

“I'm actually having a lot of thoughts on the golf course. It's not something that I'm used to, at all. So it's bringing a lot of difficult parts of my games into play, so I'm a little bit uncomfortable to be quite honest, but always got to learn to be comfortable being uncomfortable,” said Kang, who is making her tournament debut. “So yeah, the golf course, it's tough for me, so it's going to be definitely a test in every aspect of my game and I think that will be interesting.”

If Kang takes the victory this week, she would become the first player since Ariya Jutanugarn in 2016 to win at least three consecutive events. The list of other players to accomplish that feat is a who’s-who of some of the best names in the game – Lorena Ochoa, Inbee Park, Annika Sorenstam, Kathy Whitworth and Mickey Wright. For Kang to join that elite group, she’ll need to decipher this week’s challenge, and she’s more than up to that challenge.

“I've worked on a lot of different types of golf during this time, this off-time and I worked quite a bit playing in cold weather, trying to figure out how to play with layers on and I've been testing different things and trying to play different shots for links golf and all. But I think this golf course is a bit different from links golf, as well. It's a bit American-style links golf, a little exaggerated here and there. So that's the difficult part,” said Kang. “But like I said, I think I've just got to trust my game. I'm playing well and it's going to bring me a lot of challenges and I'm going to have to make a lot of up-and-downs for pars out here, it just seems like it, no matter how great of an iron player you are, you're going to have some up-and-downs you're going to have to make. So I'm excited to see what this golf course hands me.”

As one of the seven Scottish players in the Aberdeen Standard Investments Ladies Scottish Open, Gemma Dryburgh would love nothing more than to hoist the trophy come Sunday at The Renaissance Club. Thanks to the Rose Ladies Series, a tour organized by Justin and Kate Rose following the pandemic-related shutdown, Dryburgh comes into the week in some of the best playing shape of her career.

Dryburgh won back-to-back Rose Series Ladies events at Buckinghamshire Golf Club and Royal St. George’s, the latter hosting its first women’s professional event after hosting The Open on 14 occasions. After completing a 14-day quarantine upon her return to the United States, Dryburgh tied for sixth at the LPGA Drive On Championship, the best result of her three-year LPGA Tour career.

“Obviously getting into competition again after lockdown, getting me sharp and just getting my game in good nick,” said Dryburgh, who played collegiately at Tulane University. “I think that really helped me going into the LPGA Drive on Tournament, and just had a really strong start.”

Dryburgh now sets her sights on The Renaissance Club, hosting its second consecutive Ladies Scottish Open. While she has yet to make a cut in the tournament, Dryburgh feels that this could finally be her year. She also gets the honor of striking the tournament’s opening ball, teeing off Thursday at 6:30 a.m. alongside Julia Engstrom and Azahara Munoz.

“It's looking really good. The rough's up compared to last year,” said Dryburgh. “It's looking a lot narrower, which hopefully will suit me and the greens are much firmer than last year, so hopefully it stays that way. I quite like that.”

Everyone likes a tournament where she can just drive to the venue. It took eight hours for 2018 AIG Women’s Open champion Georgia Hall to drive from her home in Bournemouth, England, up to The Renaissance Club in Scotland. But it was definitely better than having to get on an airplane.

“I'm so happy to be in Scotland and to only just drive up for my first event,” said Hall with a laugh. “It's great for me.”

This week marks Hall’s first LPGA Tour competition since February’s ISPS Handa Women’s Australian Open, as she opted to remain in England rather than fly to the United States for the two resumption events in Ohio. She kept her game honed through England’s strict quarantine by working out and practicing in her backyard and worked her way back into competitive form thanks for the Rose Ladies Series, where she won twice. Now she’s ready to resume her LPGA Tour season at one of her favorite events.

“Everyone always targets majors, but this is one of my favorite events of the year because it's so close to home and I love playing links golf. So I don't really treat it as like a warmup for next week. Both are just as important,” said Hall, who tied for 24th here in 2019. “This is my first kind of main event back, so I do want to get off to a good start but I'm not putting any pressure on myself. I'll just go out there and stay calm and let kind of all my practice do the work.”

CHARLEY HULL COMES TO #ASILSO ON A ROLL

Charley Hull arrived at The Renaissance Club as one of the hottest golfers in the women’s game. The English player competed in all eight Rose Ladies Series events, capturing Order of Merit honors after taking two victories and five other top-10 finishes.

“It was a really, really good thing to play in,” said Hull, who also competed on the Clutch Pro Tour, a mini tour for both men and women. “It was on some really good golf courses as well because you never really get to play all the heathland golf courses in England. So it was nice to play them, and just a good warmup for the season.”

It’s now back to LPGA Tour competition for Hull, who last teed it up in January at the Gainbridge LPGA at Boca Rio, where she tied for 11th. The Renaissance Club is a links-style course, running along the Firth of Forth and just next to Muirfield. Links courses are not necessarily Hull’s favorite layout, but the return to competition means that Hull wouldn’t rather be anywhere else. She’s even the rare golfer who is actually praying for a little rain to hit the course, as opposed to Wednesday’s perfectly sunny day.

Minjee Lee has played some spectacular golf since the Tour’s restart in Toledo in July, earning a third-place finish at the LPGA Drive On Championship and placing fourth at the Marathon LPGA Classic presented by Dana. After flying across the sea for the Aberdeen Standard Investments Ladies Scottish Open, Lee said she’s been waiting for this week’s event on her calendar for some time.

The Australian is confident in her play, especially after recording two eagles at last week’s Marathon LPGA Classic. During the Tour’s hiatus, Lee said she focused on her swing, working hard at her ball-striking and driving abilities. She believes her hard work and improvement will continue to show as she adjusts to links golf in Scotland.

The following statistics were compiled by Amy Mills, the LPGA’s senior manager of statistical research.

For the second consecutive year, The Renaissance Club will host the Aberdeen Standard Investments Ladies Scottish Open. The event was previously played in Scotland at Dundonald Links (2017) and Gullane Golf Club (2018). Since the event debuted on the LPGA Tour in 2017, there have been only five players whose combined score to par has exceeded -15, and just three more players in double digits (Carlota Ciganda, Yu Liu and Elizabeth Szokol at -11).

Over the previous three editions, Mi Jung Hur has averaged the most holes scored under par per round at 4.4 followed by Mi Hyang Lee at 4.3. Last year at The Renaissance Club, players who competed on the weekend had a 3.66 birdie or better average for the event.

Jodi Ewart Shadoff recorded a second-place finish last week at the Marathon LPGA Classic to continue her streak of top 10s on the season with three, her career-best on the LPGA Tour. Ewart Shadoff previously finished fifth at the LPGA Drive On Championship and in a tie for 10th place at the ISPS Handa Women’s Australian Open earlier this year. Her accuracy off the tee (79%) along with putting have contributed to her performance.

Ewart Shadoff has averaged 1.74 putts per green in regulation and is making an average of 4.13 birdies per round, which ranks ninth on Tour. This will be her first playing at The Renaissance Club. Her best scoring performance in Scotland was at the 2017 AIG Women’s Open at Kingsbarns, where she finished second at -16.

PAST CHAMPIONS AND RUNNERS-UP