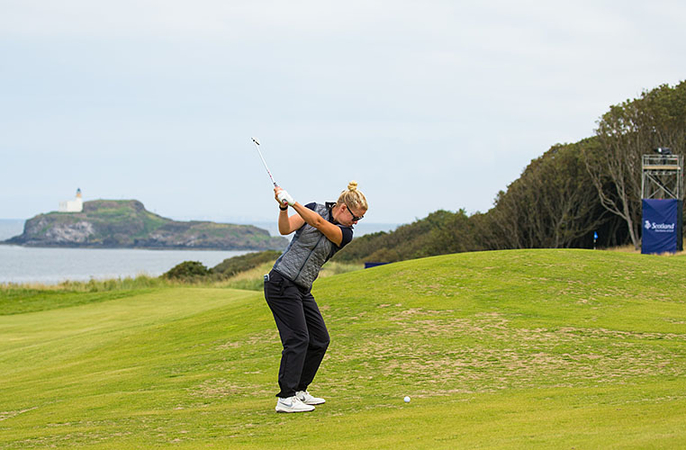 Playing in her first LPGA Tour event since February, Denmark’s Nicole Broch Larsen returned a 4-under 67, including a tap-in birdie after a spectacular approach at No. 18, and sits stop the leaderboard at the Aberdeen Standard Investments Ladies Scottish Open.

“I had 26 putts, so that helps a lot. I didn't hit it like super close but I made a couple of long ones, and I just tried to keep it in play,” said Broch Larsen, who played in the day’s second group and enjoyed relatively calm breezes compared to the afternoon’s steady winds. “I feel like that's kind of the secret to links golf. Like you've got to just play the round and then you make your putt here and there, and yeah, I mean, then it's 4-under.”

Heavy fog blanketed The Renaissance Club on Thursday morning, pushing back tee times by two hours. Play was suspended at 8:35 p.m. due to darkness, with 27 players (nine groups) yet to finish. The first round will resume at 8 a.m. on Friday, with the second round beginning on time at 6:30 a.m.

Broch Larsen has a one-stroke lead over five players, including her countrywoman Emily Kristine Pedersen. Pedersen opened with five birdies over her opening seven holes but lost her momentum with a double bogey at No. 8. She then parred her way in to finish at -3, where she is joined by Americans Jennifer Song and Amy Olson, Germany’s Olivia Cowan and Spain’s Azahara Munoz.

Danielle Kang, who came to Scotland having won the LPGA Tour’s last two events in Ohio, shot even-par 71 on Thursday and is tied for 22nd after 18 holes. 2017 Ladies Scottish Open winner Mi Hyang Lee opened with a 3-over 74 and is tied for 65th, while 2018 champion Ariya Jutanugarn did not finish her round, sitting +3 through 12 holes.

2019 AIG Women’s Open champion Hinako Shibuno, playing in Europe for the first time since winning at Woburn, struggled on Thursday. Her opening-round 8-over 79 included six bogeys and a double bogey, putting the Japanese star into a tie for 126th going to Friday.

The Aberdeen Standard Investments Ladies Scottish Open is the first of two consecutive events in Scotland. Next week, the Tour heads to Royal Troon for the season’s first major, the AIG Women’s Open.

Nicole Broch Larsen made the game look easy on the 18th green at The Renaissance Club. The 27-year-old from Denmark rolled her approach shot at the par-4 closing hole to just inches short of the hole, tapping in for -4 and earning the lead with 27 players left to complete the first round of the Aberdeen Standard Investments Ladies Scottish Open.

This is just Broch Larsen’s second LPGA Tour competition of 2020, joining February’s ISPS Handa Women’s Australian Open. She used the pandemic-related break in the season to enjoy the most family time in Denmark that she can remember for a long time, and also worked hard on her putting and short game. That time at home? It certainly paid off today on the golf course.

“I'm a home person and I love being home. So to me, it's definitely been a good period, even though I of course wanted to play tournament golf,” said Broch Larsen, who got engaged to boyfriend Kasper Estrup over the break. “For me personally, it's been really good, and it's not a different Nicole, but I feel like I'm in a better place and I felt that on the course today. I was more relaxed and whenever I hit a bad shot, I kind of moved on faster than normally.”

It’s not like she spent the break in a tropical paradise. In fact, it snowed in Fargo, North Dakota, in May. But that didn’t deter or even dampen Amy Olson’s spirit. Nothing ever does. The 28-year-old, in her seventh season on the LPGA Tour, is still looking for her first career victory but remains the consummate happy warrior, a player who is universally kind and almost always upbeat.

She has also put together some stellar rounds in 2020 while adapting to a whirlwind of change.

She finished second at the ISPS Handa Women’s Australian Open back in February, her best finish since September 2018 when she led the Evian Championship until the final hole and finished tied for second behind Angela Stanford. But after four great rounds Down Under earlier this year, Olson, along with everyone else in golf, hit the pause button. She went home to the frigid Midwest where she and her husband Grant (a football coach at North Dakota State University) weathered the unknown with grace and confidence.

“At first, I took (the hiatus) as being like a second offseason,” Olson said after opening with a 3-under 68 in the Aberdeen Standard Investment Ladies Scottish Open on Thursday. “It was probably five weeks without touching a club after things got canceled. So then once the weather started getting better in May, I started practicing again.”

Then she paused and said, “Honestly I was just playing more than practicing. I think that was good for me, not spending too much time working on technical stuff.”

The honor of striking the first tee shot went to Gemma Dryburgh, one of seven Scots in the field. However, due to a two-hour delay due to heavy fog that blanketed The Renaissance Club, that tee shot cracked through the sky at 8:30 a.m. rather than the regularly scheduled 6:30 a.m.

“There was a few people that came to the first tee, Aberdeen Standard staff, which was nice, just to have someone there,” said Dryburgh. “I did feel nervous. It's always an honor to hit the first tee shot. I got to do it a couple years ago at Gullane, and that was about 6:45, or 6:30, as well. It was 8:30 today but felt like 6:30. I was nervous but I like feeling a bit of nerves. I think it focuses you, as long as you manage them well, which I think I can do now.”

Once Dryburgh finally hit the course, any trace of nerves or sleepiness quickly wore away. She bounced back from a bogey on No. 2 with four consecutive birdies at 5-8, and despite an unfortunate double bogey at No. 11, the 27-year-old from Aberdeen finished at -2 and is the low Scot heading into Friday’s second round in a tie for seventh. Playing early certainly gave Dryburgh a weather advantage, getting most of her round in before the afternoon winds picked up.

“The sun came out on 13, and it's really nice now,” said Dryburgh. “The wind's gotten up a bit, so I think it will play a bit tougher this afternoon. Our back nine definitely played tougher into the wind and stuff. But the last three holes are downwind, so there's a few chances there, as well.”

In 2019, Sandra Gal was not able to play the Aberdeen Standard Investments Ladies Scottish Open, taking a medical leave before the event’s start. She took a break from playing once diagnosed with dormant Lyme Disease after fevers, headaches and fatigue filled most of her season. Gal planned to return to the LPGA Tour in March 2020 until the coronavirus pandemic kept her at bay and is now thankful to be able to compete this week in Scotland.

“I think it's a bit unusual as a pro golfer to take such a long time off. We don't do it unless we are forced to, right and I think I did so many different things in this off time that were not golf related and I really found a different perspective on my job and it really helps me I think right now to just appreciate it,” said Gal, who recorded a first-round 69 to sit in a tie for seventh.

Gal came out swinging in her first event in nearly a year. The butterflies in her stomach didn’t faze her as she went about the tournament like any other.

“I was nervous but it kind of felt good in a way to know, like it was a familiar feeling, and you don't unlearn it to kind of deal with it I think, but I really, I was like, I don't know how today is going to go and how this week is going to go,” said Gal. “I had a bit of wrist issues the last couple months and I couldn't practice as much as I wanted to. So it was nice to just play well today and ease into it.”