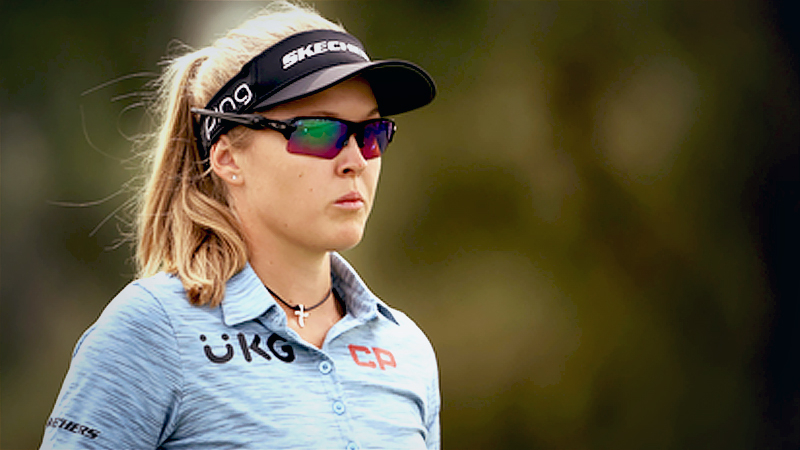 The leaderboard at the ANA Inspiration is absolutely packed with power names and inspiring stories heading into Sunday’s final round. Young stars 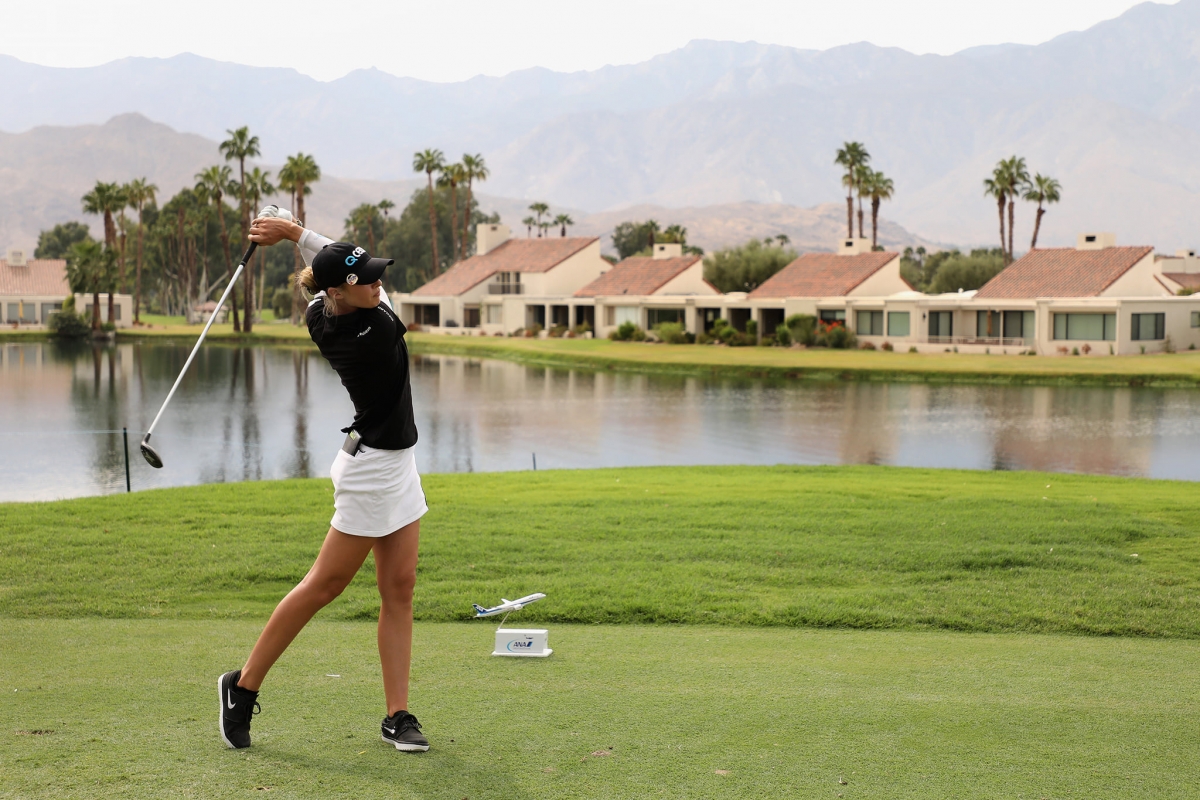 Brooke Henderson and Nelly Korda are tied for the lead at -12 with one round to go. Lexi Thompson, seemingly always in contention on the Dinah Shore Tournament Course, is tied for second at -10 with LPGA Tour veterans Katherine Kirk and Mirim Lee, both looking for the first major victory of their careers.

Henderson started the day six strokes off Korda’s lead but made a 15-foot eagle putt at the par-5 second to begin her charge. She added in six birdies and one bogey en route to a 7-under 65, her lowest ANA 18-hole round by two strokes.

“Being a major championship, you've really got to stay patient and know bogeys are going to happen,” said Henderson, a nine-time LPGA Tour winner. “The rough out there is very thick and you're just praying it's sitting up if you hit it in there. You just have to go with what the course gives you and just expect bogeys and try to make a lot of birdies to counter them.”

Henderson has never missed the cut in her five previous ANA Inspiration appearances but only has one top-10 to her name, a tie for 10th in 2016.

After blitzing her way around the course on Thursday and Friday, Korda came back to Earth on Saturday. A bogey at No. 5 was her first scorecard blemish since her fourth hole in Thursday’s first round. She then found the water at No. 6 en route to a double bogey, leaving the American phenom looking vulnerable and trailing for the first time since Thursday. But she bounced back with three birdies on the back nine for a 71 and put herself back into contention for her first major title.

“It was a disappointing front nine, but I was really proud of the way I fought on the back nine,” said Korda. “Never gave up and there's still 18 more holes to be played, so much golf.”

Kirk, a 17-year LPGA Tour veteran, will join Henderson and Korda in Sunday’s final grouping. The Australian player, who has three career victories, returned an even-par 72 on Saturday and would absolutely relish the opportunity to make the famed leap into Poppie’s Pond come Sunday afternoon.

“I've played out here, I don't know how many years now but certainly being a veteran, got a lot of good rounds here under my belt and good memories, and it's going to be a nerve-wracking day,” said Kirk, whose best finish in her 12 ANA Inspiration appearances in a tie for eighth in 2009. “But I've just got to go out there and try and execute as best I can and try and stick to what I've been doing because it's been pretty solid so far.”

Thompson’s rollercoaster round of 2-under 70 included five birdies, two bogeys and one double bogey, while Lee carded four birdies and three bogeys in her 1-under 71. They will play in Sunday’s penultimate group alongside Carlota Ciganda, who shot up the leaderboard with a 5-under 67 on Saturday.

Lexi Thompson would become the eighth player to win the ANA Inspiration at least twice, joining her victory in 2014

A 5-under 67 on Moving Day at Mission Hills Country Club has Katherine Kirk just two strokes off the lead at -10. The three-time LPGA Tour champion will round out the final grouping in the ANA Inspiration final round.

Between what it would mean as her first career major championship title, to a refreshing dip to beat the SoCal heat, Kirk can think of nothing better than jumping into Poppie’s Pond come tomorrow afternoon.

“Doubly good because it's so stinking hot out here and it would be great to cool off,” Kirk said with a smile. “There are a lot of great players on the leaderboard. I’m probably going to have to go low and it's going to take a really good number. Anything is possible in this game; have to stay patient and positive.”

With only one bogey over her last 43 holes, Kirk is sticking to her game plan and believes she has the formula to give herself a chance at hoisting the Dinah Shore Trophy on Sunday.

“I pretty much executed my game plan and hopefully I can be a little bit sharper tomorrow, maybe make a few more putts but overall, I'm pretty happy,” said Kirk. “There are some leaderboards on the back and I did take a quick glance a few times. This golf course is not easy, and you must hit fairways to have a chance of making any birdies. That was the quickest way to get me focused, was to realize I've got tough shots ahead of me. I've got to go hit good shots, forget about the leaderboard and just go play golf.”

Lexi Thompson already has one ANA Inspiration title to her name, making the jump into Poppie’s Pond in 2014 at age 19. With an amazing track record at Mission Hills and four other top-10 finishes, she can never be counted out. Heading into Sunday’s final round, Thompson sits just two strokes off the lead.

The rest of the field? They had better watch out. Thompson is not going to let this title go without a fight.

“It would mean the world to me to win another major, especially on this golf course as it's one of my favorites we play all year,” said Thompson, who has won at least once for the last seven years. “Just going to go out tomorrow and keep hitting good shots and hopefully a few more putts will fall on the back nine.”

Amateurs Rose Zhang and Gabriela Ruffels are certainly making the most of their exemptions into the 2020 ANA Inspiration. Zhang, who won last month’s U.S. Women’s Amateur over Ruffels, holed out from 150 yards for eagle at the par-4 fourth on Saturday and heads to the final round at -8 overall, tied for seventh.

“I'm super satisfied with how I played. Starting in the front, I wasn't exactly hitting the ball where I wanted to, so I had to make a lot of clutch par putts,” said Zhang, who tied for 60th in the 2018 ANA Inspiration after winning the ANA Junior Inspiration. “After the eagle hole-out, which I didn't expect, I started getting a little bit of momentum and overall, I'm just super satisfied with how I played.”

Ruffels captured the 2019 U.S. Women’s Amateur title and came so close to successfully defending before falling to Zhang. The University of Southern California senior, who heads to Sunday’s final round in a tie for 14th at -6, knows that she’s showed her best at the amateur level, and now this is her chance to learn so much more playing alongside the world’s best professionals.

“It was a great experience at the U.S. Am, all the pressure and expectation, and I handled it pretty well,” said Ruffels, who hails from Australia but currently lives just 20 miles from Mission Hills in Indian Wells, Calif. “This is a different stage, best in the world out here, so it's just a great experience and I'm always trying to learn as much as I can.”

Linnea Strom made the sixth hole-in-one of the 2020 LPGA Tour season, acing the 161-yard eighth hole with an 8-iron.

“I had just had (a double bogey) and a bogey and my caddie just told me, okay, let's restart and start over,” said Strom. “I was just trying to hit a good shot and it was actually a perfect shot. Hit it right at the pin and just landed a little short of it and rolled in. I couldn't see it. But Cristie (Kerr) saw it, she said it went in, so that was nice.”

“That was actually the first thing I thought of when I made a hole-in-one. I was like, oh, my God, I'm going to raise some money,” said Strom. “So that's very nice, and obviously feels very good to do something good for them.”