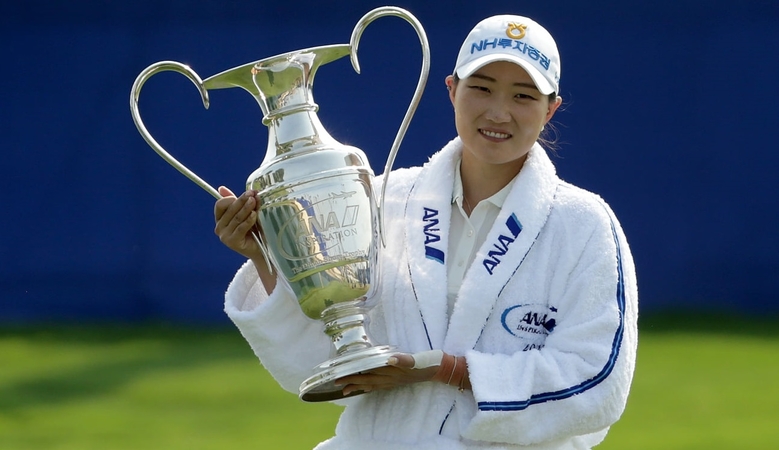 The Republic of Korea’s Mirim Lee made the famed leap into Poppie’s Pond, nailing a birdie on the first playoff hole at the 2020 ANA Inspiration to beat Canadian Brooke Henderson and the USA’s Nelly Korda, all tied at -15.

Lee shot a final-round 67, sparked by birdie chip-ins at 6 and 16 and an eagle chip at the final hole to jump to the top of the leaderboard.

“I can't really believe it right now,” said Lee, who earned her first major title and her first victory since the 2017 Kia Classic. “To be honest, I feel like I must be a little crazy for winning and for having won this, and I think I'll be able to feel it once I meet my family and reunite with them.”

Playing in the penultimate group, Lee stepped to the 18th tee two strokes behind Korda after a bogey at No. 17. After reaching the green in two, Lee chipped in from off the back of the green to tie for the lead.

“It was a bit disappointing having the bogey on 17, so my plan for 18 was just to have a birdie and do what I have to do to keep my head up,” said Lee. “When the shot went in, I think I was really surprised. It must have been a bit of luck that helped me.”

Playing together in the final group, Korda made par and Henderson birdied 18 to force the three-way playoff. On the first hole of sudden death, Henderson and Lee reached the green in two, but Korda’s tee shot found the left rough and she was forced to lay up. Henderson’s birdie putt just squeaked by the hole and Korda’s attempt came up well short. Lee’s birdie putt found the center of the hole, giving her the title.

“I played solid today. Had a couple bogeys kind of starting on the back nine, but I kept my calm,” said Korda, who became the fourth player to lead after the first three rounds but not take the title. “Didn't hit a really good shot on 18 off the tee both times, so that's what kind of got me in trouble there.”

Rose Zhang earned low-amateur honors by finishing tied for 11th at -8. Her 280 is the lowest 72-hole score by an amateur in ANA inspiration history, besting the 281 shot by Caroline Keggi in 1988 and Michelle Wie in 2004.

After missing the cut at the AIG Women’s Open three weeks ago (the first missed cut of her career in a major championship), nine-time LPGA Tour winner Brooke Henderson bounced back in a big way with a tie for second at the ANA Inspiration.

Henderson recorded five final-round birdies around the Dinah Shore Tournament Course at Mission Hills Country Club en route to a 3-under 69. Even a double bogey at the par-4 13th didn’t slow Henderson, who forced a three-way sudden-death playoff with birdie on the 72nd hole.

“I definitely played really well this week, which is a really nice feeling and it gives me confidence moving forward,” Henderson said after par on the first playoff hole. “Mirim [Lee] played great today and so did Nelly [Korda]. It was fun. You are playing against the best in the world out there.

“It was tough to lose that way. I felt like I missed a lot of putts, especially the final round where I feel like maybe it could have been a different story. Mirim and Nelly played great and I fought my way around, so I am happy.”

After leading the three previous rounds of the ANA Inspiration, Nelly Korda came just short of her first career major title after losing in a three-way playoff with Brooke Henderson to Mirim Lee. She had traded the lead with Henderson most of the day, but Korda was up two strokes after a birdie on 14. As she walked up the 18 green, she had no clue Lee had tied her after an eagle chip on her 72nd hole.

“No idea, no,” said Korda. “She must have played amazing golf coming in, so props to her.”

Korda said she felt she played solid today, and is proud of keeping calm after overcoming three bogeys on Nos. 8, 10 and 12. She said her tee shot on 18 “kind of got me in trouble,” but no matter what was happy to have her family to support her throughout the final round with parents Petr and Regina, and older sister and five-time LPGA Tour winner Jessica, all walking along outside the ropes.

“I'm just going to take positives from this week, know my game is trending upward,” said Korda, who will appear in next week’s Cambia Portland Classic. “I'm just going to continue working hard and see where that takes me.”

If Rose Zhang thought 2020 couldn’t get any better for her, she proved herself wrong today. A month after winning the 2020 U.S. Women’s Amateur, Zhang earned low-amateur honors at the ANA Inspiration after finishing in a tie for 11th at -8, thanks in part to birdies on her final two holes. Her 280 is the lowest 72-hole score ever by an amateur, breaking the mark of 281 set by Caroline Keggi (1988) and Michelle Wie (2004).

“Honestly I just feel so incredibly blessed to play such a prestigious event, especially in this LPGA major,” said Zhang, who lives two hours away and even volunteered here in 2017. “Ever since I started golf, I watched the ANA Inspiration and I watched Lydia Ko and Jin-Young Ko jump into Poppie’s Pond and Pernilla Lindberg. To be able to be on this venue is truly an honor.”

The high-school senior and Stanford University commit played in the 2018 major after winning the ANA Junior Inspiration, where she took her own dive into Poppie’s Pond. Zhang made the cut and finished in a tie for 60th and credits the changes she’s made since her leap to the player she is today.

“I think everything changed so much. Two years is a huge difference, and I feel like I've grown physically and mentally,” said Zhang. “I just still kept the same mindset as I had two years ago about just doing my own thing and trying to improve each step of the way. I'm just extremely honored

Pajaree Anannarukarn made the seventh hole-in-one of the 2020 LPGA Tour season, acing the 121-yard 14th hole with a pitching wedge.

“Just choked down a little bit and just punched that pitching wedge,” said Anannarukarn. “Actually, that's my favorite club, so it's really cool to be able to make it and it went pretty straight, so I'm really happy about it.”

The CME Group Cares Challenge is a season-long charitable giving program that turns aces into donations. For that ace, CME Group will donate $20,000 to St. Jude Children's Research Hospital, which is leading the way the world understands, treats and defeats childhood cancer and other life-threatening diseases. The 2020 season has now seen seven aces, for a total of $140,000 donated to St. Jude Children’s Research Hospital.

Anannarukarn ultimately shot a 2-under 70 on the day and tied for 32nd at -2.