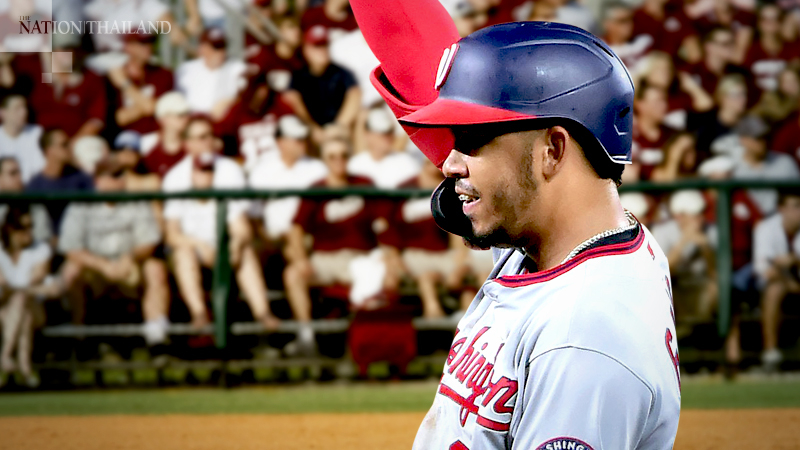 TAMPA, Fla. - The automatic runner at second, that pesky new rule for 2020, has led to a breathless conversation about extra-inning strategy. Is it best to bunt the man to third to set up a sacrifice fly? Is that worth it on the road when the home team can easily do the same in the bottom of the inning? Or is a bunt ever worth it when the analytics say, no, it's never good to give away outs, especially with the game on the line.

But that all gets thrown out when your rookie second baseman sits on a first-pitch fastball, crushes it off the other team's best reliever, then stands a foot outside the batter's box, almost posing, while a game-winning, two-run homer sails way over the right-field wall. That's what happened for the Washington Nationals on Wednesday, once Luis García, at 20 the youngest player in the majors, delivered a 4-2 win over the first-place Tampa Bay Rays.

Daniel Hudson had blown his second consecutive save opportunity just minutes earlier. But García took Carter Kieboom, the automatic runner, and told him to jog home. García was right behind him, drifting toward the plate, the dugout, into a small celebration with his teammates before Kyle McGowin struck out the side in the bottom of the 10th.

The Nationals are now 18-29 because of García's bat. They left Tampa with a glimpse into their future.

"What a great kid," Manager Dave Martinez said of García, who debuted in mid-August after Starlin Castro broke his wrist. "I'll tell you right now, he has no fear. He's going to give you everything he's got. He goes out there and has fun playing the game."

Before the game reached extras, and gave García his shot, Austin Voth bent an issue that's plagued him all summer. The starter hadn't completed five innings since Aug. 8, six starts and many earned runs ago. He had a 10.72 ERA in that span, inviting questions of whether he should be in the rotation at all. Martinez, though, wanted to keep watching Voth. He wanted to see if the 28-year-old could fix himself on the fly. And finally, with next to no shot at the playoffs now, something clicked.

Voth hit trouble when he plucked Randy Arozarena with two outs in the first. The next batter, Nate Lowe, punched a double to right and Arozarena wheeled around from first. It hinted at more of the same from Voth, who's too often left the Nationals behind in his starts. But this time he recovered quickly, leaning on heavily on his four-seam fastball.

The pitch brought 28 swings, 10 whiffs and four called strikes. He spotted it on the low-and-outside and ran it up in the zone. When Voth's at his best - a form the Nationals have seen in quick flashes - he throws his fastball at will and lets his curve play off it. On Wednesday, five of his season-high six strikeouts came with a batter swinging through his fastball. The other was on his cutter, another pitch that improves when his fastball is commanded well.

So Voth showed Martinez what he'd yearned to see: some length, steady velocity, even a few 94-mph throws on the radar before he exited after 88 pitches. In his second trip through the order, what has been a nightmare for him, Voth allowed one hit, one walk and issued an intentional pass to the red-hot Lowe. He then finished his outing by stranding runners on first and third.

"It was huge," Voth said of trending in the right direction. "Just to be able to come out here and throw the way I did today, I've been working hard week in and week out and it seemed like I hadn't been getting progress for the longest time."

"The main thing for me I was using my legs properly," he added of the success with his fastball. "I felt like I still had energy and stuff left in the tank in the fifth inning."

That was enough to hand the bullpen a slim lead. And while most of it excelled - with scoreless innings from Wander Suero, Kyle Finnegan and Will Harris - Hudson kept struggling. He allowed the tying homer to Lowe with two outs and two strikes on the scoreboard. It was off an inside slider that Hudson left too high around Lowe's thighs. This was five days after Hudson blew a three-run save against the Atlanta Braves, and he'd also recorded the first two outs of the ninth.

But, just like in that game, the Nationals endured in extras. This time, Hudson had García to thank. García met a 5-for-30 slump in late August after a solid start. Since, he'd been mostly average, learning to face major league pitchers and adjusting in the field. But he had four hits in seven at-bats heading into this one, leading him to a matchup with closer Nick Anderson. And that's when his lack of fear kicked in.

"One thing my dad and I always talked about is that players always seemed afraid, a little bit, when the game got too, too big for them, once they first got to the big leagues," García said in Spanish through a team interpreter. "And we would talk about how it was weird, that that's where you want to be and yet at the same time you're a little afraid of that moment. And it shouldn't be that way."

Anderson entered the game with a 0.00 ERA in 12 innings. He left it with one earned run on his season line, put there by the second homer of García's young career. He may never return to the minors beyond this year. But on Wednesday, once McGowin worked a spotless 10th, in the twilight of a season short on bright spots, it only mattered that García was here right now.