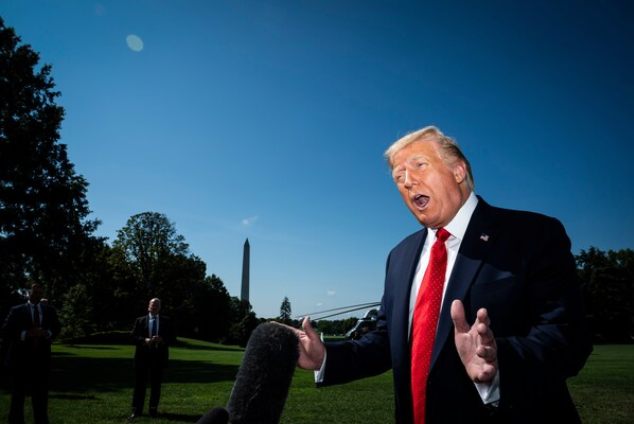 Five weeks after postponing its football season over safety concerns, the Big Ten Conference reversed course Wednesday, saying it would play this fall even as its colleges and surrounding communities struggle to contain the coronavirus.

The decision was cheered on not only by fans but by President Donald Trump, who has used the conference's decision to seek an edge in Midwestern battleground states where Big Ten football reigns. But it raised immediate questions, including from students, about the role politics and economics played in changing the minds of university presidents.

Trump quickly took credit for helping save the seasons of some of college football's most popular teams. But while White House officials implied it had made federal resources available to the Big Ten, one person familiar with the process said the conference hasn't been given, nor has it requested, federal assistance. And the conference's university presidents insisted the decision was not political, crediting instead their evolving understanding of the virus and access to more and better testing.

"Medical advice I relied on when I voted five weeks ago said virtually no chance we could do it safely," Northwestern University President Morton Schapiro said Wednesday. "For me, it was, OK, we're going to postpone the season and let's hope we have that in place the first weekend of January. And then the medical opinion changed."

Reviving the Big Ten season, which is now scheduled to start Oct. 23, will have major financial ramifications for all 14 conference schools, which include Ohio State University, the University of Michigan, the University of Maryland and other premier public universities. With state budgets and other revenue already devastated by the pandemic, the universities were bracing for a huge economic hit. Michigan Athletic Director Warde Manuel has estimated his school alone would lose $100 million without fall sports.

The rescheduled football games will be contested without paying fans in attendance, but the conference and schools will get a chance to recoup other revenue, including broadcast fees and sponsorship money.

Testing 14 football teams will require processing about 150,000 tests between Sept. 30 and Dec. 19, the conference's final weekend. Big Ten officials have not disclosed some key details around its testing plan, although Commissioner Kevin Warren said Wednesday that the conference would pay for the tests.

"We are so much better and so much more prepared today than we were 43 days ago," Warren said.

Conference officials say the medical advice and testing capabilities have changed dramatically in the past month, which swayed the school presidents and chancellors, who unanimously agreed to resume play.

"Our ability to test consistently and uniformly amongst the conference and provide that was really important," Ohio State head team physician James Borchers, co-chair of the conference's Return to Competition Task Force medical subcommittee, said on a video conference with reporters. "I think we have been very comfortable with the idea that we'll be able to provide daily rapid testing, which will give us great surveillance of our student-athletes and those individuals involved in those competitions."

The sudden availability of testing raised immediate questions about the fairness of testing athletes and not other students. The virus, which has killed more than 193,000 people in the United States, has thrived on college campuses. In the Big Ten, the counties of five schools - Penn State, Indiana, Wisconsin, Michigan State and Nebraska - are averaging more than 30 new cases per 100,000 people per day, according to Washington Post data. And nine of the counties where Big Ten campuses are located are currently experiencing more weekly cases than they were on Aug. 11.

While the NCAA and other college officials routinely liken scholarship athletes to the rest of the student body, the Big Ten's decision means football players will now be afforded medical care not available to other students. A Northwestern student journalist pressed Jim Phillips, the Northwestern athletic director, on that issue Wednesday.

"In the end, this is something that the Big Ten is administering, and obviously we're one of the institutions in the Big Ten, and so it's a fair question," Phillips said, "and I don't know if I have an answer."

Dan Alpert, the student body president at the University of Maryland, said in an interview that the student government has been pushing for greater testing capacity on campus. He would still like to see more of the Big Ten's resources "being devoted to schools overall and not just athletics."

"One thing that frustrated me and other student body presidents from across the Big Ten [is that] resources are being devoted to bring football back, but not for the rest of the school," Alpert said. "I think it's important that if you're going to try to bring something back, you also then enhance the academic experience of other students as well."

As the NFL and some other college conferences pressed ahead this summer, the Big Ten postponed its season on Aug. 11, with 11 of the 14 university leaders reportedly voting not to play. The backlash was swift. Parents held a rally outside the conference's headquarters near Chicago. Ohio State quarterback Justin Fields urged the Big Ten to reverse its decision with a petition that received more than 300,000 signatures. Some Big Ten coaches publicly criticized the conference and voiced their desire to play, and families at the University of Nebraska sued the conference.

Politicians and pundits seized on the discord, looking for leverage in key battleground states where Big Ten football rules, including Wisconsin, Michigan and Pennsylvania. Former vice president Joe Biden, the Democratic presidential nominee, ran ads in the Midwest featuring pictures of empty football stadiums, while Trump and his surrogates went on talk radio to blame liberals' cautiousness for a fall without Big Ten football.

Within minutes of the Big Ten's announcement, the White House had mobilized to claim victory.

Trump tweeted: "Great News: BIG TEN FOOTBALL IS BACK. All teams to participate. Thank you to the players, coaches, parents, and all school representatives. Have a FANTASTIC SEASON! It is my great honor to have helped!!!"

Trump spoke with Warren, the Big Ten commissioner, on Sept. 1, offering federal government assistance. Both Trump and the Big Ten described the call as a "productive conversation," though one person familiar with the process said Wednesday it had little bearing on the conference's final decision.

A senior administration official, who spoke to reporters on the condition of anonymity to describe the president's role, said Wednesday that the White House was heavily involved in discussions in the past month, which the official claimed included more than 300 phone calls. In addition to the president's call with Warren, the official said Trump also spoke with Big Ten coaches, athletic directors and parents, who the official declined to name.

"All I can tell you is that the president within 48 hours of that call [with Warren] had what the Big Ten was asking for in order to allow them to play," the White House official said. "He fulfilled what they're looking for."

A conference spokesman did not immediately respond to a request for comment Wednesday, but a person familiar with the process said the conference wasn't relying on any White House assistance in restarting its season.

It's unclear how the return of football might alter the electoral landscape in those states where Big Ten football is popular. A YouGov poll of more than 7,000 adults found 59 percent of respondents approved of the Big Ten's decision to postpone college sports. Republicans were closely split; 41 percent supported the decision while 36 percent were opposed.

"I don't think it's going to benefit President Trump any more than it was going to benefit Biden before," said Nick Everhart, a national GOP consultant based in the Midwest. "But what is impactful is you do have two to three weekends of conference games, particularly in Ohio, Pennsylvania and Wisconsin, where you will have large ceilings for audiences for running ads."

On a video conference call with reporters Wednesday, conference and university officials stressed that the decision to resume the football season was made solely because health and safety concerns had been addressed.

Added Penn State Athletic Director Sandy Barbour: "If it was possible to get there safely, we were gonna find a way. And that's what happened."