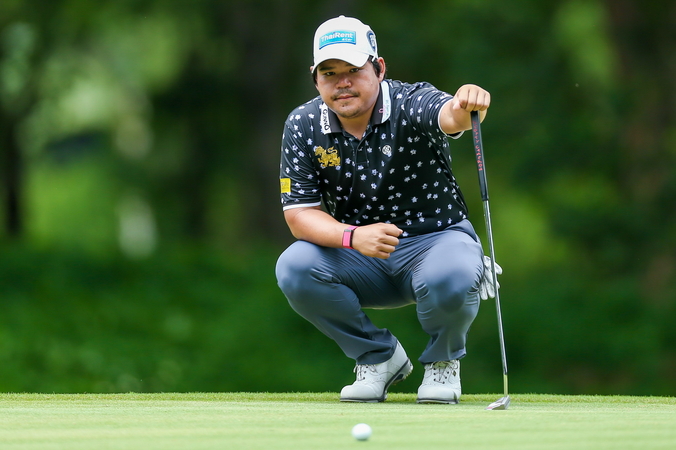 The in-form Panuphol Pittayarat will have to put two back-to-back play-off defeats behind him, as he eyes his season’s first win in Sunday’s final of the Bt5-million Singha Thailand Masters at the Santiburi Country Club in Chiang Rai province.

The 27-year-old, who endured two straight defeats to Thanyakorn Krongpha and Suradit Yongcharoenchai on the Thai PGA Tour in extra time, carded an even par 72 to lead alongside two unfancied rivals -- Sarun Sirithon and Ratchapol Jantavara -- on 13-under-par 203.

“You cannot let what happened in the past bother you,” said the 2017 champion who after seven play-offs finally surrendered to Suradit two weeks ago in Kanchanaburi. “You have to look ahead and try to relax out there.”

Despite his experience and familiarity with the course where he triumphed three years ago for his first and only All Thailand Golf Tour victory, Panuphol, or “Coconut” as his family calls him, never views himself as the favourite going up against Sarun and Ratchapol. The two are still looking for first career wins.

“What happened before cannot be taken into account in the final. Only the best player wins,” he added.

Ratchapol, 33, was up and down all day before settling for a 71. The Nonthaburi-based player is looking for a breakthrough victory after finishing second in the All Thailand Golf Tour in Rayong last year.

“This is the first time that I’m playing well after having poor results in five tournaments. I will give my all in the final round and hope to make some good putts,” added Ratchapol.

Sarun, 24, from Khon Kaen province has never been in the lead before. But he hopes to cause some stir as he tees off in the final group on Sunday.

“The key is to hit good tee shots. As long as you hit the fairways, you can create opportunities and try to make putts. However, I will give my all in the final and won’t regret whatever the outcome,” Sarun said.

Falling a shot behind is former world top-50 player Thongchai Jaidee, who picked up his golf clubs just four days ago. His unblemished round of 67 saw him land at fourth on 204.

“I just want to catch up with my fellow players and have fun. I barely play golf these days because of Covid-19,” said the 50-year-old, who despite his wide range of victories and extensive experience, has never won on this course before.

“I hardly played this tournament because I was on overseas tours most of the time. Having this score for a guy my age is beyond expectations. I just hope to have more fun time with the guys tomorrow,” added the former Thai No 1.