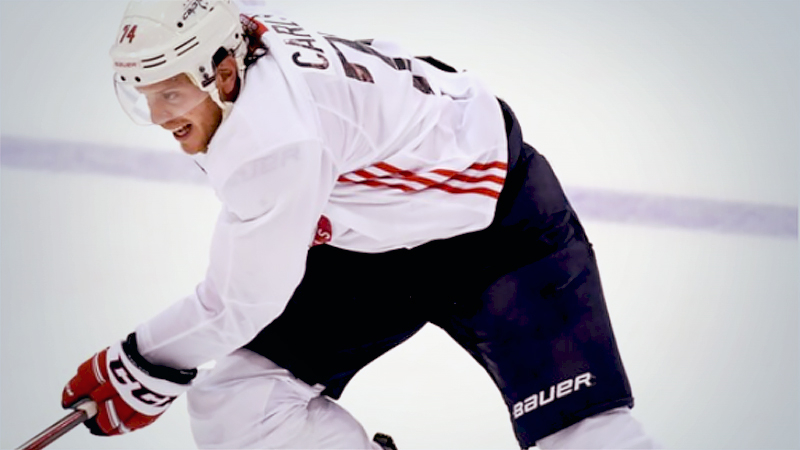 Capitals' defenseman John Carlson had a career season but lost out to Nashville's Roman Josi in Norris Trophy voting. Carlson is shown here chasing the puck down ice during an intrasquad scrimmage at the MedStar Capitals Iceplex in Arlington, Va., on Friday, July 24, 2020. MUST CREDIT: Washington Post photo by Toni L. Sandys.

Carlson was considered the favorite after a career year in offensive production, breaking numerous franchise and league records. The 11-year veteran led all defensemen in points (75) and assists (60) and set or tied career highs in every offensive category. Josi was second to Carlson in points with 65. Tampa Bay's Victor Hedman, who finished third in voting, was third in points among defenseman with 55.

The announcement came during an unconventional NHL Awards show broadcast from the NHL's bubble in Edmonton before Game 2 of the Stanley Cup finals. Hall of Famer Paul Coffey virtually presented the Norris Trophy to Josi.

Josi had 16 goals and 49 assists, franchise records for a defenseman. He also scored the most points in a season by any Predators player since 2009 and had the eighth-best scoring season in team history.

Carlson was a finalist for the first time in his career after finishing fourth in voting after the 2018-19 season and fifth in 2017-18. Even after his scoring pace slowed in the weeks before the NHL was forced to shut down in March because of the novel coronavirus pandemic, Carlson averaged 1.09 points per game, the most by a defenseman since Ray Bourque, Sergei Zubov and Al MacInnis (Calgary Flames) each matched or eclipsed that mark in the 1993-94 season.

Carlson was named an alternate captain for the Capitals for the first time this season and had a blazing offensive start to the season. After Carlson recorded five goals and 15 assists in his first 11 games, teammates started openly campaigning for him, with Capitals captain Alex Ovechkin starting a "JohnnyforNorris" hashtag on Twitter.

Carlson earned the NHL's First Star of the Week on Dec. 9, posting three goals and three assists in three games. By Dec. 31, Carlson had 50 points through 41 games, putting him on pace for 100 points if the season was to be completed as scheduled and earning him some lofty comparisons. There have only been 14 100-point seasons by defensemen in NHL history, and Coffey and Bobby Orr have 11 of them. No defenseman has finished a season with 100 points since Brian Leetch in 1991-92.

"To see him mentioned with those kind of people, it is crazy," Carlson's dad, Dick, said in mid-December as he watched John practice in Tampa during the Capitals' mentors trip. "You kind of have to knock yourself in the head and say, 'Holy cow, is this your kid?'"

Former Capitals star defenseman Calle Johansson said in a phone interview from his native Sweden over the weekend that he felt Carlson's game was the most consistent of the three finalists and he was deserving of the award.

Carlson became the Capitals' all-time leader in points by a defenseman in late February, passing Johansson's mark of 474. Carlson, who debuted during the 2009-10 season, has 478 career points. He is under contract with the Capitals through 2025-26.

However, regardless of the honor going to Josi, Johansson believes that Carlson could be a Norris Trophy finalist for years to come. Johansson said the blue-liner has the "opportunity to be the best defensive defenseman because of his skating, size and strength."

Johansson expects this won't be the first time Carlson is named a finalist.

"This is not a one-time deal," Johansson said. "If you look around the league and you take out all the defenseman, there are three, four guys, maybe, that have the skill, the strength, the skating, the size, the age. He's got everything going for him. If he wants to and his mind is with him and gets his head wrapped around it, he could be a finalist for the next five to six years, absolutely."

Carlson would have been second player in Capitals history to win the Norris. Rod Langway won it twice, in 1983 and 1984. Mike Green was named a finalist in both 2009 and 2010 but did not win in either season.

"He was just outstanding this year," Johansson said. "I know he's been good for a lot of years, but this year he took it to a whole other level and got a lot of backup. . . . What he did is tough. You can play 35, 40 games and be successful, but he did it. He just kept on going and going and going all the way through.

"He has it all. I think what people see now is what you get right now, but I can almost expect more from him. I don't want it to sound negative; it should be a really positive thing. He's so good now, but he can be so much better."