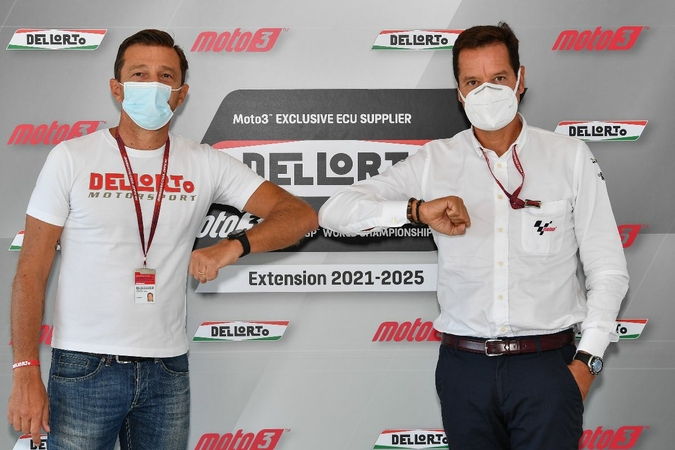 Dorna Sports is delighted to announce a five-year contract extension with Dell’Orto, confirming the Italian company will continue as the exclusive ECU supplier to the FIM Moto3™ World Championship until 2025. Headquartered in Lombardy, Dell’Orto has been the sole ECU supplier for the lightweight class of Grand Prix racing since 2012 and is a long term partner of MotoGP™.

Moto3™ guarantees incredible racing, showcasing the best of close competition as well as creating an invaluable step on the ladder to the premier class, MotoGP™. The technical regulations – such as having a sole ECU supplier – contribute to creating one of the closest shows on Earth, something Dell’Orto has been an invaluable part of since the inception of Moto3™ in 2012. The company is also an important partner of the FIM Enel MotoE™ World Cup, having come on board as Official Data Acquisition partner of the project in 2020.

Andrea Dell’Orto, DELL’ORTO S.p.A. Executive Vice President: "In a competitive sector such as motorsport, being reconfirmed for the fourth consecutive time as ‘Moto3 exclusive ECU supplier’ makes me proud of the great job we have done. The trust placed in DELLORTO since 2012 for the Moto3 championship and since 2019 for the FIM Enel MotoE World Cup, beyond the source of pride, is an incentive for investing in motorsport. An investment that converts into know-how to be transferred to the two- and four-wheels products that we drive every day and which reinforces the redemption policy of our brand. "

Pau Serracanta, Managing Director at Dorna Sports: “We are very happy to announce that Dell’Orto will continue as the exclusive Moto3 ECU supplier until 2025. A trusted partner since Moto3 began in 2012, and since having also become an invaluable contributor to MotoE, Dell’Orto are an important part of our sport and it’s fantastic news to have them on board in the lightweight class for another five years.”