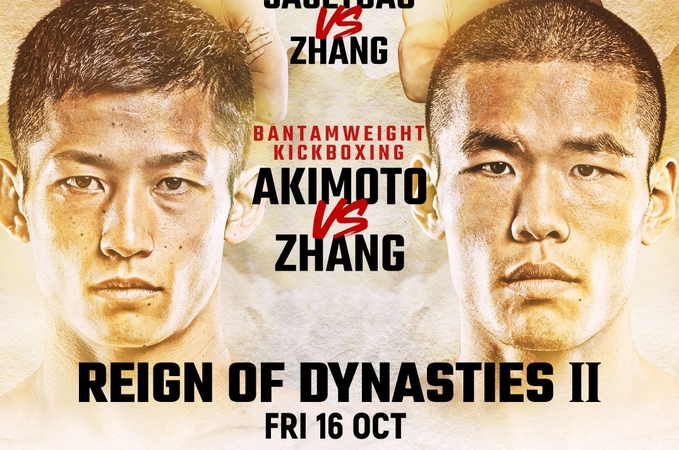 Japanese former WFKO Kyokushin Karate World Champion Hiroki Akimoto knows what he wants, and that’s a shot at a ONE World Title. The increasingly confident striker from Evolve MMA understands his next bout could be a huge leap forward for him, if he can win convincingly.

Akimoto is set to face former ONE World Title Challenger “Muay Thai Boy” Zhang Chenglong of China in the main event of ONE: REIGN OF DYNASTIES II, a previously-recorded event in Singapore set for global broadcast on Friday, 16 October. The bout is a kickboxing showdown in 8-ounce gloves.

He’s been working very hard in the gym, sharpening his tools to prepare for Zhang’s vaunted power. Akimoto is determined to put together a thrilling performance and wants to make his way up the bantamweight rankings.

“I want to win, earn a spot in the rankings, and be a top-level contender to challenge for the World Title. I think I am prepared well. My coaches say my kicks and punches have become heavier,” said Akimoto.

“I thought he was a powerful athlete, so I was not sure how it was going to be. I had the impression that he was a tough athlete with strong punches. He has a strong chin and stamina.”

Zhang is a former Top King Muay Thai World Champion and no doubt a formidable foe for Akimoto.

Although Zhang fell just short of victory against Alaverdi Ramazanov, losing by decision in a bout for the inaugural ONE Bantamweight Kickboxing World Title, Akimoto was greatly impressed by the Chinese star’s performance.

Akimoto was most impressed by Zhang’s fearlessness, which caught him by surprise.

“In the World Title match, his way of fighting was different from normal athletes. He was knocked down, and I think he got some damage. Some athletes try to buy time in that kind of situation, but he kept going forward. Besides, I saw that he was even aiming for a counter-attack. With those characteristics, I think he is a difficult one,” said Akimoto.

“I think his punches are strong, but I think I have advantages in kicks and at long range. I think he will close the distance of my kicks, but when it happens, I will counter with punches and kicks.”

ONE: REIGN OF DYNASTIES II is a previously-recorded global broadcast featuring the absolute best in local and international martial arts talent. The audience-free, behind-closed-doors event took place at the Singapore Indoor Stadium, with strict Covid-19 protocols in place. Zhang and Akimoto will headline what is expected to be an exciting card.

Akimoto believes he already knows how the fight will play out. Though Zhang is looking to knock Akimoto out, the Japanese warrior declares he’s ready to do the same, and that fans should get excited for what he says will be an all out war.

“I think in the opening stanza, as far as I saw from his past bouts, he looks like he aims to knock out while checking out how the opponent goes. At that moment, I will strike a lot here and there and look for a good weapon that works for him. From the second round, I think he will close the distance, so I want to aim for a counter-attack to defeat him,” said Akimoto.

“I mainly used kicks in matches in ONE, but this time, I am thinking I am going to use punches against the punching specialist. This is something I want audiences to pay attention to. I built up my body firmly and gained power. So, of course, I have my sights set on knocking him down to win by KO.”

A victory over a former ONE World Title Challenger would no doubt take Akimoto further up the rankings, and perhaps, eventually to a shot at the belt.

“To aim to be a World Champion means I have someone to look up to. I want to be a ONE World Champion, defend the belt, and be a person who is looked up to,” said Akimoto.