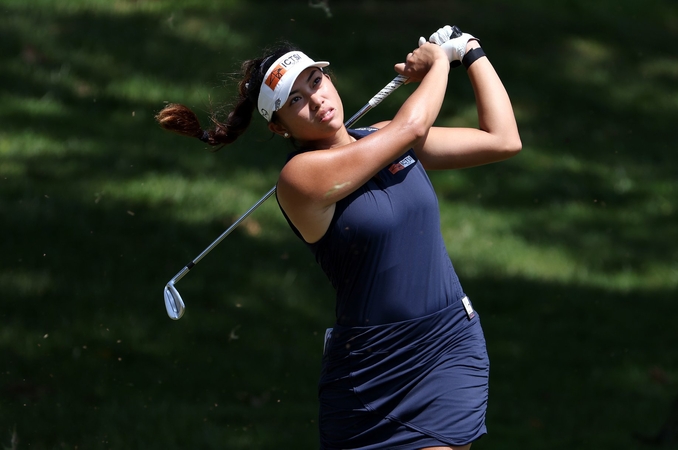 Following a week off after the KPMG Women’s PGA Championship, the LPGA Tour returns to action with the LPGA Drive On Championship – Reynolds Lake Oconee, the first time the Tour makes its way to Greensboro, Ga.

Highlighting this week’s field is Rolex Rankings No. 5 Danielle Kang, who won the first LPGA Drive On Championship event back in July at Inverness Club. Minjee Lee (No. 9) and Lexi Thompson (No. 10) round out those competing this week within the Rolex Rankings top 10.

2020 LPGA Tour rookie Bianca Pagdanganan and her driver have dominated the headlines recently. From finishing in a tie for ninth at her first-career major two weeks ago at the KPMG Women’s PGA Championship to currently ranking first in average driving distance on Tour (286.206 yards), the 22-year-old is making big waves in her first year.

“Obviously not the year we were all hoping for. I think this whole year has been a learning process.  As a rookie, you just try to soak in all of the experiences, try to take things from events you played in, and that you are about to play,” said Pagdanganan, who is playing in her sixth event this season this week. “It makes you feel very excited to play more events and just knowing that you get to live your dream.”

Though the recent University of Arizona graduate has a lot to think about already in terms of reaching her own goals, Pagdanganan said one of them is inspiring young girls all over the world to play golf, especially in her native country of the Philippines. “The support has been pretty crazy,” said Pagdanganan. “I see it a lot on Facebook. I get tagged in all these posts, and sometimes I get to read the comments. You can tell people are getting excited knowing that more Filipinos are getting on tour.

“Hopefully we just get to inspire younger girls to pick up the sport. I think that's one of my goals as a professional golfer, is to encourage younger kids to take up the sport. It's really fun. You get to learn so much. It's not about just the competition. It's more of learning about yourself and just developing your own character.”

This week is a blast from the past for Gerina Piller. The last time Piller visited Lake Reynolds Oconee, she was a participant in Golf Channel’s Big Break Invitational at Great Waters in 2014. She came in a tie for fifth, but remembers taking on the Jack Nicklaus design before its extensive renovation in 2018 and 2019.

“I just think the first things that comes to mind is hospitality. They welcomed us with open arms and it was just awesome. The course was great. I think we might have played some different tees. I know the greens were different. They had redone them. To be back at a tournament with past Big Breakers, that was kind of fun,” said Piller, who played alongside fellow Tour players Ryann O’Toole and Jackie Stoelting, as well as PGA Tour pro Tony Finau.

With one practice round to go, Piller looks to recount her best memories of Great Waters, anything that might be of advantage. “[I] played 18 this morning. It's tough. It's definitely playing a lot longer than I remember. The greens are firm and they have a lot of undulations. It's definitely a second-shot golf course,” said Piller after playing 18 holes on Tuesday. “You got to position yourself off the tee to get a better angle into the greens, more accessible pins. It's going to be a great test. It's in phenomenal shape. Just excited to get started.”

The Drive On campaign by the LPGA Tour is a powerful platform on which the stories of diversity and determination among its players are told in personal detail. In this year of COVID-19, Drive On has also served as an essential bridge in a disrupted season, providing opportunities to compete during trying times.

In July, the Drive On Championship at Inverness Club in Toledo, Ohio, brought the Tour back from the five-month pandemic shutdown, kicking off a run of 14 tournaments that at one time seemed like an impossibility. It was a welcome return for both LPGA Tour players and their fans.

It is a crucial island of opportunity.

After Drive On, the Tour returns at the Pelican Women’s Championship presented by DEX Imaging in Belleair, Fla., the week before Thanksgiving, followed by the Volunteers of America Classic at The Colony, Texas Dec. 3-6; the U.S. Women’s Open at Champions Club in Houston Dec. 10-13 and the CME Group Tour Championship in Naples, Fla., Dec. 17-20.