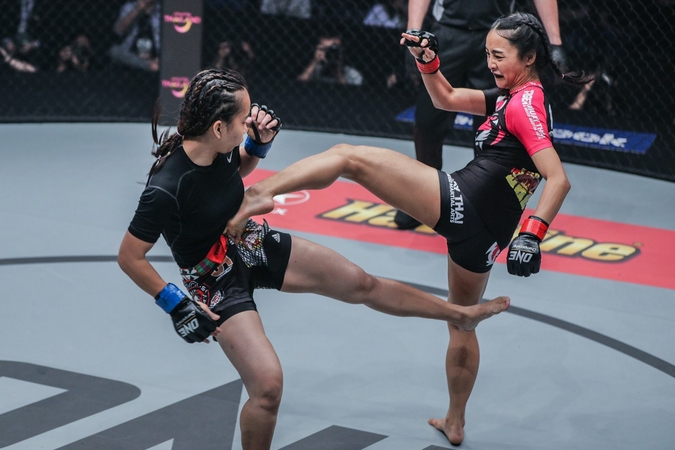 After a blistering start to her One Championship career, Thai atomweight superstar Rika “Tiny Doll” Ishige has sort of hit a snag as of late, dropping three of her last four contests.

The 31-year-old grappling ace suffered heartbreaking losses to Nou Srey Pov, Itsuki Hirata and countrywoman Sunisa Srisen, all in the past two years. The last time she tasted victory was a first-round technical knockout over Bozhena Antoniyar back in 2018. Needless to say, things have been rough as of late for Tiny Doll.

Naturally, fans are wondering what is currently going through her mind.

Rika wants to assure her supporters that all’s well, that she has gotten through a difficult patch in her life and that she is extra motivated to return to her true form.

“I try my best in every fight, but sometimes I’m unable to show all that I’ve got. My mind hasn’t been in the right place for my last few fights, and the pressure affected my performance. I did try my best, regardless,” she said.

“For my last fight, I trained on my own. I did all the preparations myself until my last week, when I trained with my new coach. I’m not making excuses, but there was an adjustment period. As a result, I wasn’t able to perform the way I expected.”

Rika isn’t expected to see action for the remainder of the year. After six straight event broadcasts from Bangkok during the height of the Covid-19 pandemic, One Championship has no confirmed events in Thailand at the moment.

Fans aren’t likely to see her until 2021 at the earliest.

Still, Tiny Doll wants to tell everyone that she remains committed to furthering her career, and that she has not lost her passion for competition.

“I know I’m getting older every day, and the window of opportunity is closing, but I don’t want my fans to get confused. I still want to prove myself. I still want to see how far I can go in this sport,” she said.

“I am still passionate about martial arts. I’m eager to learn. Every time I’m in the circle, I am happy I can inspire people to try martial arts. I am very happy to be a role model for the sport. I just want to do everything for the Thai martial arts ecosystem. This is my main motivation to keep fighting.”

By the time she steps back inside the circle, Ishige wants to be able to showcase the best version of herself. She continues to work very hard to achieve her goals and is thankful for the fans who have stuck with her despite her recent setbacks.

“I have so many areas where I need to improve, both physically and mentally. I want to improve in all areas of striking and grappling. There’s so much to learn. Mentally, I want to build my confidence. Sometimes I also hesitate to finish when I know I can. This is something I need to fix and improve,” she said.

“I want to thank all my fans around the world. I know I’ve lost a few recently, and I’ve discovered my weaknesses. But I want to thank everyone for always supporting me and wanting to see me succeed. It means a lot,” she added.

One Championship is returning with One: Inside the Matrix, scheduled for live global broadcast on October 30 from the Singapore Indoor Stadium. The event features four world title bouts – a total of six compelling contests.