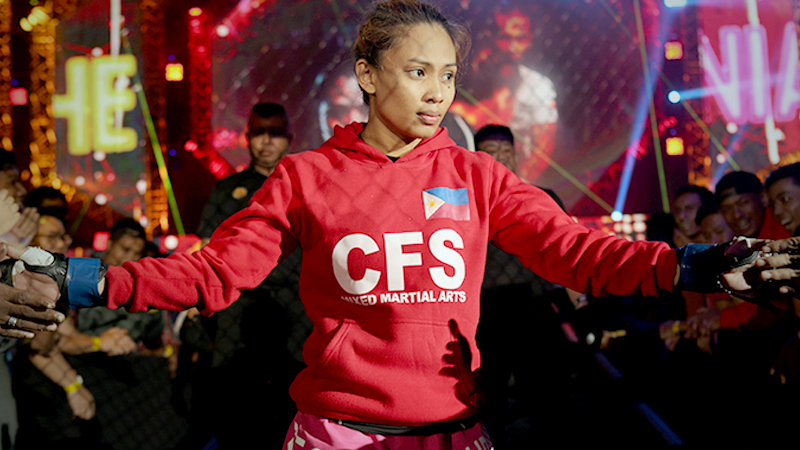 Up and coming Filipino star Jomary Torres is looking to get back to her winning ways the next time she steps inside the ONE Championship Circle. The 24-year-old “Zamboanginian Fighter” wants to break out of her recent slump in a spectacular way by taking out a highly-regarded prospect on the rise.

Torres is set to lock horns with streaking Indian wrestling champion Ritu “The Indian Tigress” Phogat at ONE: BIG BANG, which broadcasts live from the Singapore Indoor Stadium in Singapore on Friday, 4 December.

Torres, a SEA Games Sambo Medalist, is up to face a talented grappler, and is currently training with head coach and former ONE World Title contender Rene Catalan at their gym in Manila to prepare for the specific challenges Torres will face against Phogat.

“She’s a very good wrestler, so of course, I have to watch out for her takedowns. She also has much improved striking,” said Torres.

“I’ve been working on my wrestling with coach Rene. I know I’m the underdog here and people think I have very little chance in beating her. But I think I will surprise a lot of people. I’m determined to win because I’m fighting for my family. Fans should expect a good, exciting fight.”

Torres surprised fans when she won her first four bouts with ONE Championship, defeating the likes of Thai superstar Rika Ishige and Team Lakay upstart April Osenio. However, she slipped against Indonesia’s Priscilla Hertati Lumban Gaol in 2018, and has been on a losing streak since. She aims to turn things around in this next bout.

Against Phogat, Torres faces a three-time Indian national wrestling champion and 2016 Commonwealth Wrestling Champion. Phogat’s family enjoys celebrity status in India, after having the 2016 blockbuster movie, Dangal, made based on her father’s wrestling career training his daughters. Dangal is one of the highest grossing films in Indian history.

Inside the Circle, Phogat is currently unbeaten and is steadily improving. Torres wants to derail that train and spark her own momentum. While she has nothing but kind words for Phogat, Torres aims to score an emphatic scene-stealing knockout to get back to her winning ways.

“I watched her last fight, and her wrestling was really on full display. She also boxed very well. That improvement I’m sure comes from her training at Evolve. There she has everything she needs. I won’t be surprised if she becomes a world champion one day,” said Torres.

“I want to win this fight for my family, to make them proud, and to help them. I want to knock her out.”

ONE: BIG BANG is the first of ONE Championship’s live event offerings in the month of December. The main event features a showdown between ONE Light Heavyweight Kickboxing World Champion Roman Kryklia of the Ukraine and challenger Murat “The Butcher” Aygun of the Netherlands.